Future Population Increase and its Impact on Food Supply

Future Population Increase and its Impact on Food Supply

Earth is becoming increasingly crowded. Global population stands at just over 7 billion and is rising by 78 million people per year. Now, if that number does not sound like a lot to you, think about it this way--we are adding close to the population of Germany every year to our crowded planet! Currently 134 million children are born every year, that is 367 thousand per day, and there are approximately 56 million deaths per year. At this rate, the population is predicted to reach 8 billion by 2027 and about 9 billion by 2046. It's mind-boggling to think that global population when many of you were born stood at just over 5 billion! The graph below shows the massive increase in global population as well as these scary projections. It demonstrates how global population increase has been driven by surging populations of Africa and, especially, Asia. 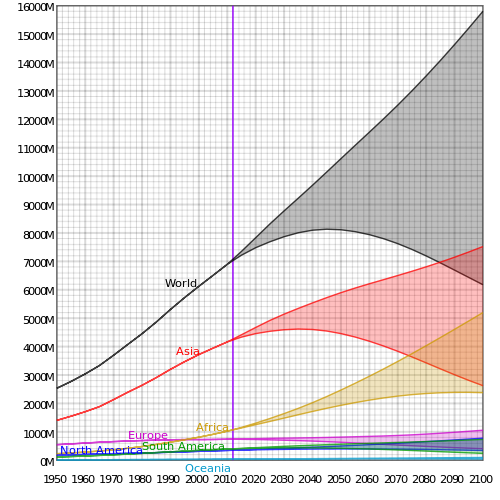 United Nations population estimates for the world and different continents are based on differing fertility assumptions. Population is shown on the y-axis and year on the x-axis. As you can see, there is a significant divergence of estimates especially in Asia starting in about 2030 due to uncertainties associated with fertility and mortality.
Credit: Cmglee from Wikipedia (CC BY-SA 3.0)

The video below portrays the recent growth in population as well as the outlook.

Video: 7 Billion, National Geographic Magazine (2:57) This video is not narrated.

Click here for a transcript of the 7 Billion, National Geographic Magazine video.

This is a silent movie with words that come across the screen with music in the background. The text says:

7 billion is a big number. By the end of 2011, YOU will be one of 7 billion people living on earth. It would take 200 years just to count to 7 billion out loud. 7 billion steps would take you around the globe 133 times.

In 2008, for the first time ever, more of us lived in cities than rural areas. Megacity = population greater than 10 million. In 1975 there were 3 megacities: Mexico. Tokyo, and New York City. Right now there are 21 megacities. By 2050, 70% of us will be living in urban areas but… we don’t take up as much space as you’d think. Standing shoulder to shoulder, all 7 billion of us would fill the city of Los Angeles.

In 1798, Thomas Malthus wrote An Essay on the Principle of Population. In this work, he predicted that populations of nations would be restricted by the availability of food because nations would not be able to control birth rate. The essay has been intensely debated by evolutionary biologists, economists, and many others for the last two centuries. Repeated famines around the globe generally support Malthus' hypothesis.

Regardless, we find ourselves in a position today where the world is currently not able to feed all of its inhabitants. Currently, more than one billion people are estimated to lack sufficient food, and more than twice that number do not receive adequate nutrition. This situation will likely become a lot more dire in the future. In fact, predictions for population increase diverge significantly in the later parts of the century because some models assume mass mortality due to widespread famine. To make matters worse, climate change is predicted to cause major problems to crop yields, especially in parts of the world where the population is growing the fastest. These shortages will likely lead to mass migration of huge numbers of people, possibly entire nations. 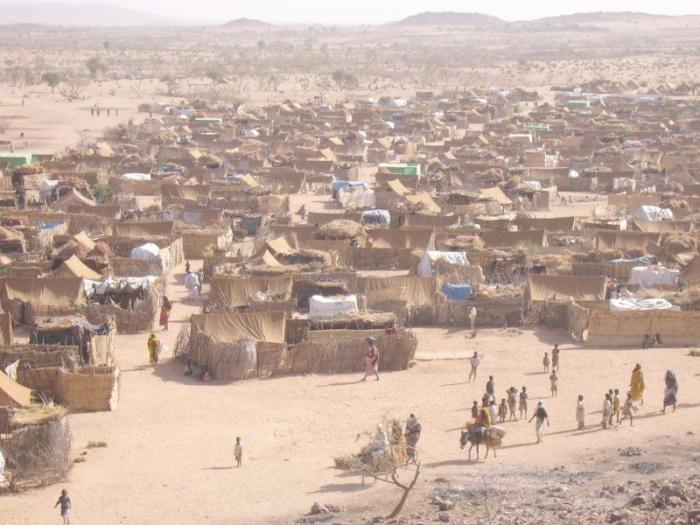 Agriculture is an essential part of every society. Forty percent of the Earth’s surface is managed for cropland and pasture. That is more than for any other activity including forestry, which comprises 30% of Earth's area. In underdeveloped countries, approximately 70% of the population live in rural areas where agriculture is the major activity. There are many diverse sources of food, and populations around the world have very different diets and demands. In addition to crop and livestock, fish is a stable diet in many countries. Projections for climate change differ significantly for these various food sources, thus we will discuss them separately. For crop farming, in particular, the impact of climate change is very different for agro-businesses run by multinational corporations in the developed nations than for family-operated farms in the developing world.

Climate change will have very different impacts on different continents, and socio-economic factors will govern the abilities of nations to respond. Even though the south-central and southwestern US are likely to face extreme drought in the coming decades, inhabitants and businesses should by and large be able to adapt. It will be a starkly different situation in Southern Africa, India and Southeast Asia, Mexico, northeast Brazil, southern Africa, and West Africa, where climate change will be coupled with a general lack of coping mechanisms. In all of these regions, the impact of climate change, and the inability of societies to fully cope with it will potentially result in security issues including soaring food prices and military conflicts.

Food shortages will not be a new problem in many places. Mass migrations driven by food supply have been an important part of human evolution and a tragic part of the history of many nations, especially those in Africa. As we saw in Module 2, famine caused by drought is thought to have caused the collapse of the Mayan civilization in Central America around 850 AD. More recently in China, famine in the late part of the 19th century caused the death of some 60 million people. Famine is possible even in the developed world. The Irish potato famine between 1845 and 1852 caused by a potato disease called potato blight led to approximately 1 million deaths, between 20 and 25% of the population of that country. This problem does not appear to be improving with time. In the 20th century, 70 million people are thought to have died during famines: 30 million alone in China between 1958 and 1961, and 7-10 million in India in 1943. 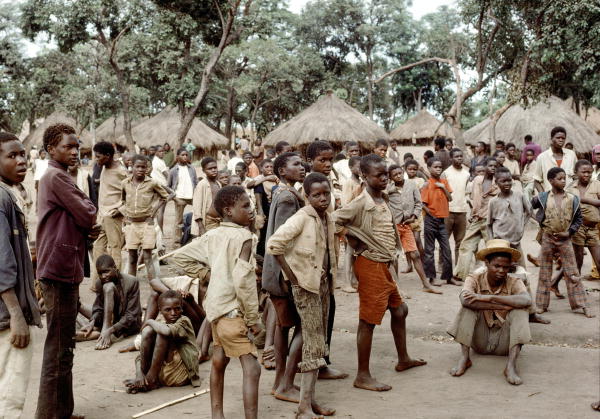 Nowhere is the history of famine more devastating than in Africa. Famines on the African continent, like elsewhere, have often resulted from a combination of drought and political conflicts, oppressive military regimes, and war. Most recently the conflict in the Darfur region of Sudan erupted over water in 2003. One side of the conflict, consisting of migratory farmers, has displaced large numbers of sedentary farmers to parts of the country without sufficient food and water. Mass mortality has largely been caused by disease. Estimates of the number of dead are uncertain but are between 180,000 and 460,000. This number is much less than the number of mortalities in the Biafran conflict of Nigeria between 1967 and 1970 when nearly a million people died from conflict and starvation. Today, more than a third of Africans suffer from hunger. 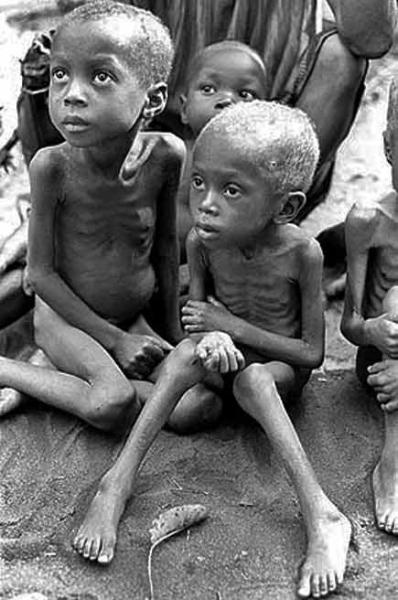 The following video portrays the tragic history of famines.

Famines Throughout the Ages: 19th-21st Century, Part 2 of 2
Click here for a transcript

Famines throughout the Ages: 19th Century to Present Day. Is your country at risk?

Food as a weapon. Ukraine was the wheat growing bread basket of Europe. But in 1932, when the mostly Christian Ukranians planned independence from the brutal communist regime of the Soviet Union, the ruling Jewish Bolsheviks, headed by dictator Josef Stalin, sent in the Red Army to confiscate and lock away their grain. Ukraine borders were then sealed. No food could get in, and no one could escape. Unspeakable horror followed. In the two years of this man-made famine, 10 million people and their animals starved to death in inhuman suffering. Stalin made films convincing the outside world all was fine in the Ukraine. The 20-30 million starved and shot, ended the revolution. Only now is this Zionist-inspired genocide talked about. Food as a weapon. It still happens.

Pulitzer 1994 Kevin Carter
The PHOTO in the mud is the “Pulitzer Prize” winning photo taken in 1994, during the Sudan famine. The picture depicts a famine-stricken child crawling towards an United Nations food camp, located a kilometer away. The vulture is waiting for the child to die so that it can eat it. This picture shocked the whole world. No one knows what happened to the child, including the photographer Kevin Carter who left the place as soon as the photograph was taken. Three months later he committed suicide due to depression.

One documentary writer who was here and looked at these two months after I was here, described this not as bee hives, but as a graveyard with these empty white boxes with no bees left in them. Now I'm going to sum up a year's worth of work in two sentences. To say that we have been trying to figure out what the cause of this is and what we know is that it's as if the bees have caught a flu and this flu has wiped through the population of bees. And the question that keeps us up at night is, why have the bees suddenly become so susceptible to this flu? And why are they so susceptible to these other diseases? And we don't have the answer to that yet. And we spend a lot of time trying to figure that out. If we had taken out all those ingredients the bees had indirectly or directly pollinated, we wouldn't have much on our plate. Could you grow these pumpkins without bees? It wouldn't be profitable. What happens if you have another big die-off? I'm probably out of this. If there's another big die-off of bees, some beekeepers, maybe many beekeepers, are going to go out of business. And what does that do to vegetables and fruits in the supermarket? We won't have the quality fruits. We may not have the quantity of fruits and vegetables. And this could mean higher prices at the grocery store, and it'll hit the public directly. Why is that? What does the Bible say will happen in the last days? Do you depend on commercial farming? What will happen if they go out of business? Are you growing your own foods? Or storing it? If not, you’re at risk!