Coastal Louisiana is home to hundreds of small communities, as well as several larger towns (such as Lafitte, Houma, and Thibodaux), that are not protected by the large Federal subsidized hurricane protection levees such as those that surround New Orleans. The new hurricane protection system for the area, that is currently under construction, cannot incorporate all of these communities, although the Morganza to the Gulf levee* when it is completed, will include the larger towns listed here. One community that will not be included is the small town of Isle de Jean Charles in Terrebonne Parish. This small, mostly Native American community is grappling with relocating and creating a new community, after receiving federal funds for resettlement.

Video: Isle de Jean Charles from the documentary LAST STAND ON THE ISLAND (11:23)

As the short film below will demonstrate, not all the residents agree with Chief Naquin’s decision.

Click for a transcript of the Isle de Jean Charles from the documentary LAST STAND ON THE ISLAND video.

Visitor to island: You and I will enjoy this marsh. Our kids will enjoy some of it. Our grandkids don't stand a chance.

Island Resident's voice: The island was very big. We had a lot of trees on both sides of the island. But now, we ain't got no more trees, just a few. So, the saltwater messed up everything.

The oil company has digged some canals. The more canal you dig, the more water passes through. And then, after they dug the canals, saltwater start to come in. And then, that is when the erosion started. So, the saltwater messed up everything.

Visitor to island: And every time you're out there fishing, you see a nice clump of grass floating on down with the current. That's piece of marsh going.

Island Resident 1: I am what I am. Nobody gonna move me. And if you try enough to move me, you got a problem. First, that's my home, my land, and I like it down here. So, that's how we live and that's how we gonna stay.

Visitor: Don't stand a chance unless they get to know ya. It's almost like a gated community, but there's no gates.

Island Resident 2: Hurricanes start to come, left and right. Andrew in '92. We had a lot of water. For Andrew, we had about 3 foot of water in the house. My house was done. And then, the next one came in 2002: Lili. Then, we had some water. That's when we started raising up the house. Because they had five foot of water on the land, over here. And then, after that, every two years, two, three years, we had a hurricane.

Island Resident 1: We didn't really get that much water for them hurricanes, but there was hurricanes with plenty of water.

Island Resident 2: Like the people on the island, they can do. They do almost everything for themselves, ya know? We used to build our own house. With two, three men together. Build a house ya know?

Visitor: I got to admit I can understand why these Indians down here, they're so in love with this, with this little island. This is just like heaven down here. This beats any camp that I have ever been to. You try to just protect this little bitty piece of marsh, ya know? We don't really tell anybody about this down here. We try to keep it a secret.

Island Resident 2: We don't care about Albert. Albert don't run the island. He's the chief, but he don't run us you know? We do what we please.

Chief Albert Naquin: My deal is to get a big enough piece of land and not have to worry about oil spills or hurricanes. Let's say we'll take this reservation here, and we'll take it and we'll move it here. And this is the reservation.

Interviewer: So, you wouldn't want the reservation to be on the island?

Chief: Well, would you?

Chief: Consider the deal we got right now, with the Morganza-to-the- to the Gulf, and leaves us out in the open? We'll just wash away.

Resident 2: Maybe they want to take the island. Give that to the rich people, the millionaire.

Resident 1: We're not gonna sell the island. Ain't nobody can buy that island, partner. Before they buy that island, there gonna be a war. You see when they was talking about moving the people off the island, I bought 200 dollars worth of ammunition - me. And I got four guns. Only thing I don't got is a machine gun. But I'm fixing to put my hands on one.

Resident 1: We know how to shoot guns. We got bow and arrows, we got hatchets. We can throw hatchets. I can throw a hatchet to that tree and stick it in that tree.

Resident 1: See, the people think we're stupid on the island. But we're not.

The Isle de Jean Charles residents have long been aware that the island's days are numbered as sea level rises and erosion of the marshes continues. Their houses are flooded and damaged regularly. Even so, many residents are resistant to the idea of leaving the island because of their strong attachment to the land and the way of life, including living off the water by fishing, shrimping, and crabbing. In 2016, the community of Isle de Jean Charles was the recipient of a $48 Million grant from the Department of Urban Development - HUD to relocate the families of the "Island" to a safer location, 40 miles inland near the community of Schriever. This is the first time a community has received federal funding and support for a relocation of this kind. The resettlement plan, which is still in progress has not progressed smoothly. The original intention of tribal Chief Albert Naquin was to keep the tribal community intact and create a new community that allowed displaced members who had previously left the island to rejoin the community. There are many details and concerns to be worked out between the tribe and the state. To date, 23 families have committed to relocating to the new community. Others are staying behind. The actual move is still several years ahead. The difficulties encountered highlight how challenging relocating a community can be, especially if the community wishes to stay intact. The dilemmas and challenges met by Isle de Jean Charles are likely to play out in many places as sea level rise claims other coastal communities.

For a more in-depth look at the story of the resettlement of IDJC residents, please read the following two articles:

The resettlement website has details of this plan and a video in which Chief Naquin and others outline the plan. Read the articles and watch the video on Isle de Jean Charles to help you understand the dilemma faced by such a small, tight-knit community. Consider how you would answer the questions on the cards below. Click "Turn" to see the correct answer on the reverse side of each card. 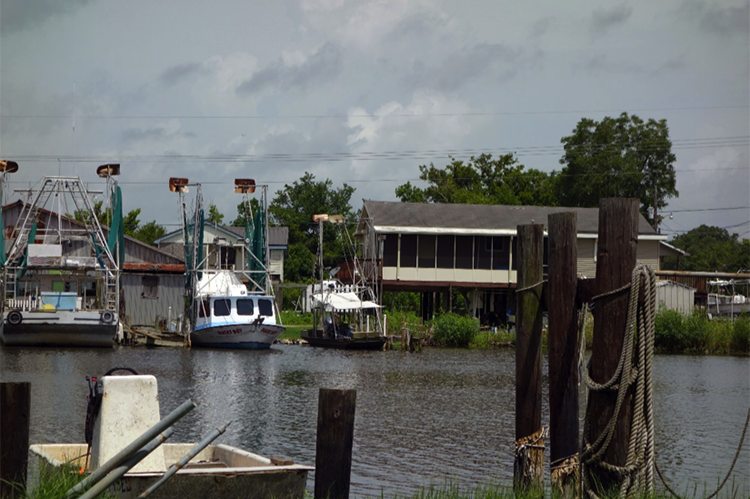