‹ Lesson 4: The Role of Water in Weather A Closer Look at Phase Changes ›

When you're finished with this page, you should be able to discuss the main components of the hydrologic cycle, especially the main mechanisms by which water enters and exists the atmosphere. You should also be able to define evaporation, condensation, transpiration, and sublimation.

Water is essential for life on our planet, and it's a critical part of many weather processes. But, it can be easy to take water, and all of its quirks, for granted. I mention "quirks" of water because water, for lack of a better phrase, is a bit "weird." For example, water is one of the rare substances that can simultaneously exist in all three phases (solid, liquid, and gas) in the same place at the same time. Think about it: when it's raining, you have liquid rain drops and cloud droplets as well as invisible water vapor (gas) in the atmosphere. But, did you also know that many clouds also contain frozen ice crystals? That means water exists in gas, liquid, and solid form in close proximity at the same time!

Water certainly has some unique properties, and it's all around us here on Earth. You may already know that a little more than two-thirds of the earth's surface is covered by water, and most water resides in the oceans. Actually, about 97 percent of Earth's water is in the oceans, which contain an almost unimaginable amount of water -- more than a billion cubic kilometers (that's more than 100 quintillion gallons, for reference). The remaining three percent exists in ice caps near the North and South Poles, in lakes, rivers, and streams, or as groundwater (water held in soil, sand, or cracks in rocks).

A very tiny amount of the water in the earth-atmosphere system exists in the atmosphere (about 0.03 percent), and nearly all of it exists as water vapor. Still, the small fraction that exists as water vapor in the atmosphere is enough to fuel huge rain and snowstorms. Amazing, eh? But, what little water vapor exists in the atmosphere at any given moment doesn't last for long, because water is regularly changing phases, and being exchanged between the earth and the atmosphere. Remember, water vapor is a variable gas, meaning that its concentration changes in time and space, from near zero to four percent of atmospheric gases (by volume). The possible paths that water can take as it changes phases and gets transported between the earth and atmosphere make up the hydrologic cycle (or "water cycle"), a simplified version of which is shown in the graphic below. 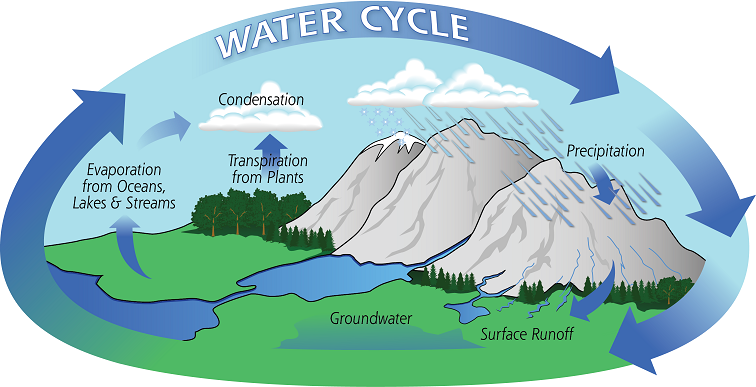 A simplified hydrologic cycle diagram. Water enters the atmosphere primarily through evaporation and transpiration, and is returned to the earth through precipitation.
Credit: NASA

Before we analyze the components of the hydrologic cycle, we first need to formally define some important processes (some of which you may already be familiar with):

With these definitions under our belts, we can now understand how water cycles through the earth-atmosphere system. Essentially, liquid water in lakes, streams, rivers, and oceans evaporates into the air (additional water vapor enters the air through transpiration from plants or as evaporation of groundwater in soil, etc.). As air rises, some water vapor condenses into cloud droplets, and when clouds grow sufficiently, water falls back to the earth (precipitation), where some gets stored as groundwater, while the rest runs off into lakes, streams, rivers, and oceans, where it can (eventually) evaporate into the air, and so on.

The biggest supplier of water vapor to the atmosphere is evaporation (by far), with transpiration and sublimation making smaller contributions, and overall in the hydrologic cycle, the largest volumes of water are transferred between the earth and atmosphere via evaporation and precipitation. The amount of water at or near the earth's surface stays relatively constant over short time-periods (say, a year), which means that average global precipitation must be roughly balanced by average global evaporation. So, over the course of a year, water that evaporates into the air as water vapor is balanced (approximately) by the water that falls back to earth as precipitation.

As I mentioned before, once a water molecule evaporates into the atmosphere, it doesn't stay there for long. On average, it takes about 11 days for a molecule to evaporate into the air (or enter via transpiration or sublimation), condense into a cloud droplet, and fall back to earth as precipitation. On the other hand, water tends to stay in liquid (or solid) form on earth for a much longer time. Liquid water molecules reside in the ocean for roughly 2,800 years before evaporating. A water molecule that ends up in a glacier may stay there for tens of thousands of years (but this happens to relatively few water molecules in the scheme of things).

Now you can see why so little water in the earth-atmosphere system is located in the atmosphere as water vapor: water's time in the atmosphere is short before it returns to the earth. Most water exists in the oceans (or in ice sheets) because water molecules reside there for such long times before evaporating. In reality, only a small fraction of water molecules are able to escape the "clutches" of the ocean to take a trip through the atmosphere as water vapor and eventually precipitation, but even this small fraction has a huge impact on weather! Clearly, water's phase changes play a key role in various aspects of the hydrologic cycle, especially evaporation (liquid to gas) and condensation (gas to liquid), so we need to explore these phase changes more in-depth. Keep reading!

‹ Lesson 4: The Role of Water in Weather A Closer Look at Phase Changes ›
METEO 3 Introductory Meteorology