Clouds Made from Special Recipes

‹ A Recipe for Making Clouds What to Do With Dew Points ›

To start, let's review the basic recipe for net condensation and cloud formation -- the Big MAC. M = moisture (water vapor), A = aerosols (condensation nuclei), and C = cooling (usually by lifting the air). This recipe gives us the basis for net condensation and explains how most clouds in the atmosphere form. As we'll learn later in the course, various weather features, such as cold or warm fronts, can serve as locations where air rises and cools to form clouds. Air can also rise when it becomes buoyant and rises via convection, for example. But, some clouds require special twists on this basic recipe (and some don't form from lifting at all). Namely, we're going to look at how clouds form via "orographic lifting," how fog forms, and how "mixing clouds" such as contrails form.

Some clouds form because of variations in the earth's terrain. For example, what happens when the wind blows and encounters a mountain or hill? The air can't go through the mountain or hill, and it can't go down into the ground, so the air has no choice but to ascend the slope. Formally, the forced lifting of air by the terrain is called orographic lifting, although meteorologists sometimes describe this ascent as an upslope flow of air ("upslope flow" or "upsloping winds" for short). Regardless of the slightly different terminology, all of these terms are synonymous with orographic lift. On the flip side, air descending a mountain is a downslope flow of air ("downslope flow" or "downsloping winds" for short).

As you know, the lifting of the air causes it to cool. When air sinks, the opposite occurs: it warms up. As winds encounter a mountain or hill and air flows up the slope, if the air cools enough, net condensation can occur and clouds can form. Some clouds that form via orographic lifting can be really spectacular, as shown in the YouTube clip below (50 sec., no narration), which shows an awesome time-lapse of clouds forming over Mount Rainier in Washington. These particular clouds are called "lenticular clouds" because of their smooth lens-like shape, although not all clouds that form via orographic lifting are lenticular. Note in the video how the cloud forms as air blows up the mountainside and cools to the point of net condensation. Meanwhile, as air blows down the mountain on the other side, the cloud dissipates somewhat as air warms up and some cloud drops evaporate.

Orographic lifting is a major "weather controller" in mountainous regions of the world, and in fact, some of the rainiest and snowiest places in the world are on the "windward" side of mountains (the side of the mountain the air ascends). On the other hand, regions that experience persistent downsloping winds (the "leeward" or "lee" side of the mountains) tend to be quite dry, because clouds (and therefore precipitation) tend to evaporate as air flows down the mountain side and warms up.

A satellite-derived vegetation map superimposed on a topographical map of the State of Washington. Greens represent lush vegetation in areas with ample precipitation, while pinks mark regions with less vegetation because they tend to be dry.
Credit: USGS

For example, the image on the right shows a satellite-derived vegetation map superimposed on a topographical map of the State of Washington. Greens represent lush vegetation in areas with ample precipitation, while pinks mark regions that with less vegetation because they tend to be dry. Note the abundance of dry land east of the Cascade Mountains, created by downslope flow, which warms and causes evaporation of clouds and precipitation. Meanwhile, farther west in the upslope regions, precipitation is more frequent and vegetation is much more lush.

For starters, what exactly is fog? Well, fog is basically a cloud that forms at (or very near) the ground. For liquid water drops of fog to form and grow, obviously we need conditions suitable for sustained net condensation. Cooling the air is the primary way that's accomplished in the atmosphere, and as you know, that's typically accomplished by lifting the air. But, if fog forms at (or very near) the ground, then lifting the air must not be part of the equation. How else can we cool the air?

Recall that on clear nights with calm or very light winds, net radiational cooling of the ground and conduction cause a significant chill to originate near the ground and spread upward slowly. Eventually, as evaporation rates decrease with declining temperatures, there may be enough water vapor present so that condensation rates exceed evaporation rates. If that's the case, then fog forms as net condensation causes liquid water drops to grow.

One striking example of such "ground fog" occurs in valley locations (often called "valley fog"). Cold dense air settles on the floor of the valley at night, and as the layer of cold air thickens, net condensation can cause dense fog throughout the valley. The image below shows an example of dense valley fog captured from above, by a webcam mounted on a communications tower on a mountain outside of State College, Pennsylvania (where Penn State's main campus is located) on the morning of October 6, 2016 just after dawn. 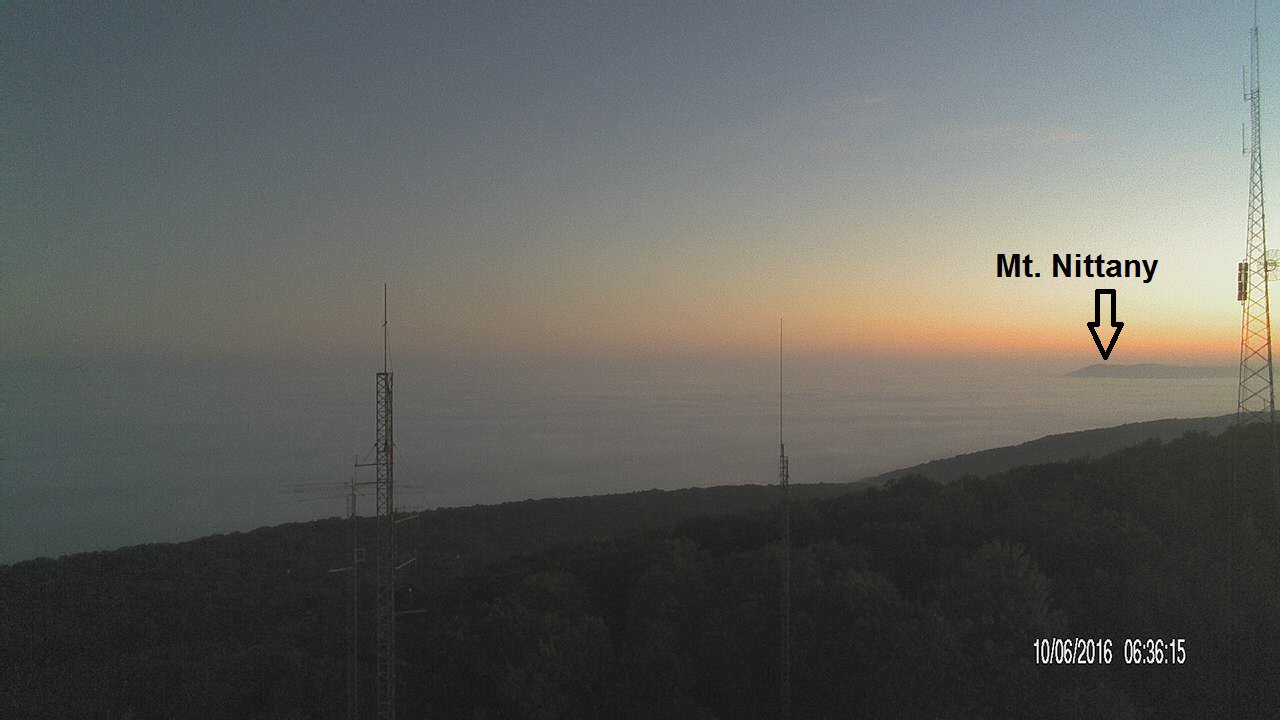 A webcam mounted on a communications tower captured a foggy morning in Happy Valley in central Pennsylvania on October 6, 2016. In the distance, you can see Mount Nittany poking its head out above the fog.
Credit: Multicomm, Inc.

While this valley is commonly known as "Happy Valley," it could have been called "foggy valley" on this particular morning, as the view from the ground on Penn State's campus around the same time as the webcam image shows. Visibility was very poor, and you can barely make out some light towers located only a couple hundred feet from the camera. The daily skycam time lapse focused on Penn State's Beaver Stadium is worth a look, too. You can see the fog develop overnight as the lowest part of the atmosphere cools to the point of net condensation. Then, through the morning, the fog gradually dissipates and Beaver Stadium emerges. Eventually clouds break for blue skies and a beautiful, sunny afternoon.

Fog can form in other ways, too. For example, a moist air mass with higher concentrations of water vapor (and therefore higher condensation rates) can move over a chilly surface such as a snow pack (with low evaporation rates), leading to net condensation. You may have also seen fog forming over lakes or streams, especially on cool autumn mornings. In such cases, the water is relatively warm, while the overlying air is cool, and such "steam fog" forms from the mixing of warm, moist air near the water surface and cooler, drier air just above. How can the mixing of air create net condensation? Let's find out!

The "steam fog" that I just mentioned is a type of mixing cloud, meaning that it forms when warm, moist air mixes with cooler, drier air. Even if you haven't noticed steam fog over a lake or stream before, I bet you've noticed that sometimes on cold days, you can see your breath, as a fleeting cloud forms as you exhale. You've also probably noticed that sometimes, "exhaust clouds" appear behind the tailpipes of automobiles, or contrails (short for condensation trails) form behind airplanes flying in the sky. These are all just mixing clouds.

When you mix air with different properties (say, your breath, or car / airplane exhaust with the surrounding air), you will get air with different temperature and water vapor content. A mixture of warm, moist air from your breath, for example, with cooler, drier air surrounding you will yield a plume of air that is cooler with a lower concentration of water vapor than your breath, but is warmer with more water vapor than the surrounding environment. If the new, mixed plume of air has enough water vapor so that condensation rates are greater than the evaporation rates associated with the temperature of the air mixture, a cloud will form! 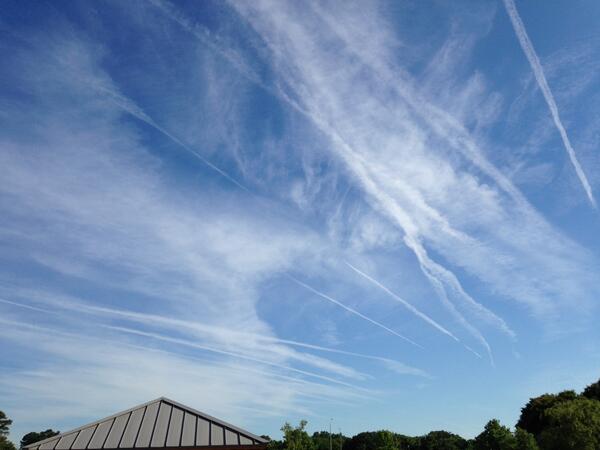 On the other hand, if there's not enough water vapor present, and / or the temperature of the new mixture of air isn't low enough, no mixing cloud will form (which is why often, you don't see your breath, or car exhaust, etc.). Mixing clouds are usually short-lived, although contrails can last for hours or even days. The air is quite cold at the altitudes where airplanes fly, and airplane exhaust is chock full of water vapor and aerosols to serve as nucleation sites (as is your car exhaust). Technically, given the very cold air at the altitudes where planes fly, contrails are mostly made of ice crystals, so the aerosols are really serving as "freezing nuclei" instead of condensation nuclei, but their general purpose is the same.

The bottom line is that very low evaporation (and sublimation) rates associated with such low temperatures mean that contrails can have some staying power, as suggested by the multiple contrails shown in the photo on the right taken near Virginia Beach, Virginia in June, 2014. No planes were in sight at the time, but there were contrails galore from planes that had flown hours ago. Also, winds at the altitudes where planes fly are typically pretty speedy, so contrails can drift and spread out over hundreds of miles. If you're interested in learning more about contrails, the NASA-GLOBE contrail page is a good resource. If you search around on the Web, you may find some chatter alleging that contrails are part of some vast government conspiracy, but they're really just a result of the processes discussed in this lesson.

By now, you know a lot about evaporation rates, condensation rates, and cloud formation. But, before I end the lesson, I want to focus the discussion on weather variables that we commonly measure (and that are commonly cited in weather reports) that can help us understand net condensation and some common weather observations. The discussion will also give us an opportunity to review some key ideas from earlier in the lesson (and course). Read on.