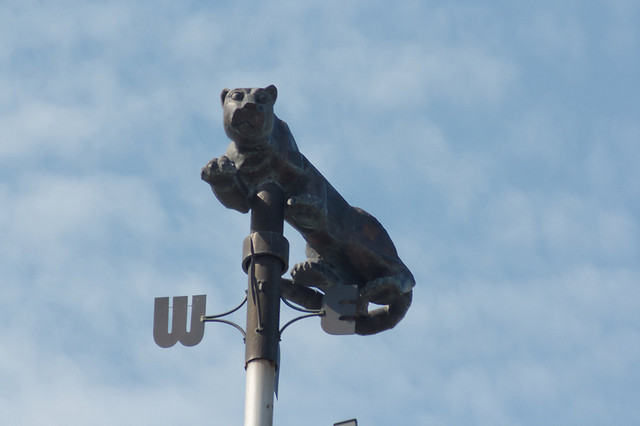 In his 1965 song, "Subterranean Homesick Blues," Bob Dylan famously quipped, "you don't need a weatherman to know which way the wind blows." I'm sure he didn't know at the time that this lyric would become one of the most influential in modern music history (it's apparently a favorite among judges and lawyers in legal proceedings). When it comes to weather forecasting, Bob is right -- kind of. You don't need a weather forecaster to know which way the wind blows right now.  Just about anyone can take their own observation, or look at a weather vane (see photograph at the right) if one happens to be nearby. But, you do need a competent weather forecaster to consistently tell you which way the wind will blow in the future.

Although wind may not get much attention in casual discussions of the weather (you don't often hear people say, "I wonder if it's going to be windy this weekend."), wind forecasting is really important. For starters, if you think back to our lesson on controllers of temperature, several of them were based on the wind (such as temperature advection and mechanical mixing of eddies caused by the wind). So, if weather forecasters make significant errors in their wind forecasts, the accuracy of temperature forecasts can suffer, too.

Furthermore, wind forecasting is pivotal in many other contexts. Sailors and pilots, for example, rely on accurate wind forecasts for safe and successful travel. The wind is also increasingly being used as an energy source via the generation of electricity from wind farms. These are just a few examples, but in a nutshell, being able to predict wind direction and speed accurately is beneficial in many settings. Indeed, we do need weather forecasters to know which way the wind will blow.

In this lesson, we're going to talk about the main forces that cause the wind to blow as it does. You'll learn that the main driving force of the wind is caused by pressure differences across the earth's surface, but other forces, namely the "Coriolis Force" and friction, also impact wind speed and direction. With an understanding of these forces, you'll be able to learn about how air circulates around high- and low-pressure systems, and how pressure and winds change across air-mass boundaries (fronts). Ultimately, this lesson won't make you a wind forecasting expert, but by the end, you should be able to interpret basic surface maps like this one, and use the pattern of isobars to determine whether winds will be relatively fast or slow, as well as determine what direction winds will blow from.

So, this lesson has lots of useful weather analysis skills, and our first stop is to take a closer look at pressure. As you're about to see, this is a "weighty" topic! Let's get started!