Lesson 8: The Role of Stability in Thunderstorm Formation

‹ Winter Weather Safety The Ups and Downs of Air Parcels › 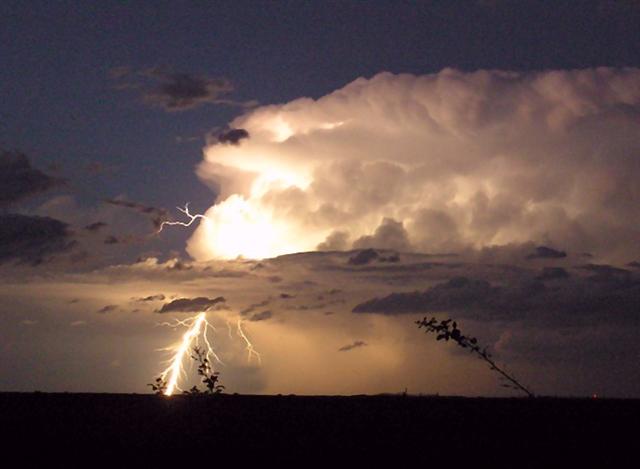 Have you ever been affected by a thunderstorm? Most folks probably have been. Perhaps a thunderstorm has altered your outdoor plans before. Or, perhaps a thunderstorm has had a more dramatic impact on you, by perhaps threatening your life and / or damaging property. Thunderstorms often evoke feelings of curiosity and perhaps fear, and it's clear that humans have long been captivated by lightning, thunder, and dark, swirling clouds. Even ancient cultures had a great respect and admiration for the power of thunderstorms. For example, the "king of the gods" in ancient Roman and Greek cultures was the god of thunder. The Romans called this god "Jupiter" (the Greeks called him "Zeus"), and his symbol was a lightning bolt.

While much of the myth and mysticism surrounding thunderstorms has faded away thanks to the scientific discoveries of the past few centuries, even today, thunderstorms still manage to inspire us. In fact, I'd venture to say that the dramatic weather brought about by thunderstorms makes them one of the top recruiting tools for new meteorologists. The next time that you find yourself talking to a meteorologist (or a self-professed "weather geek") ask them what inspired their passion for weather. There's a good chance you'll get an answer that involves thunderstorms (if not thunderstorms, often snow storms or hurricanes).

In this lesson, you're going to learn about what causes thunderstorms, and to do so, we have to talk about the vertical movement of air. By now, you should have an inkling that rising and sinking air really impact the type of "weather" a location experiences, but the types of rising and sinking air that we've talked about previously (resulting from patterns of convergence and divergence, or overrunning) are pretty gentle in the scheme of things. In other words, they create vertical motions that are fairly slow. But, in this lesson, you'll learn that small regions can have air that rises much faster (perhaps violently) even while the weather over a larger surrounding area is fairly quiet! We already discussed some of the principles behind such rapidly rising air when we discussed convection and buoyancy earlier in the course, but we'll take a closer look in this lesson.

We will also look at the climatology (that is, the "where" and "when") of thunderstorms, explore the life-cycle of a typical thunderstorm, and also learn about lightning and lightning safety. In the end, I hope that the next time you watch a thunderstorm, this lesson will enhance your appreciation and keep you safe, too! Let's get started!