Our discussion of convection and thunderstorms so far has focused on thunderstorms, which as you learned, are more common in the warmer months because of the more frequent presence of instability. In other words, warm, moist air parcels that can become positively buoyant are more common. But, instability can be present in the winter, too, even though the lower troposphere isn't all that warm or moist.

So, how does instability develop when it's not warm at the surface? Well, remember that lapse rates are the real driver of instability. Layers that are unstable are marked by temperatures decreasing rapidly with increasing height. Sometimes, a rapid decrease in temperature vertically can be accomplished with very cold air aloft. The cold air aloft makes it more likely that air parcels can be positively buoyant as they rise, even if the conditions at the surface don't seem very "warm" to us. Let's explore a couple of fascinating (and potentially dangerous) weather phenomena that result from convection in the colder months. On occasion, they even come along with thunder and lightning!

Lest I leave you with the impression that the Great Lakes have the market cornered on lake-effect snows, similar mechanisms can produce snow over other bodies of water, such as Utah's Great Salt Lake and Massachusetts Bay northeast of Cape Cod (technically, ocean-effect snow). In the mid-Atlantic, both Chesapeake Bay and Delaware Bay can produce convective snows, as well. Below is a map of all the bodies of water in North America that can produce lake-effect / ocean-effect snow under the right wind conditions (favorable wind directions denoted by arrows). I further point out that North America does not have a monopoly on lake-effect or ocean-effect snows. For example, the Japanese Islands of Honshu and Hokkaido receive Sea of Japan effect snow when Arctic air masses advance eastward from the mainland of Asia. 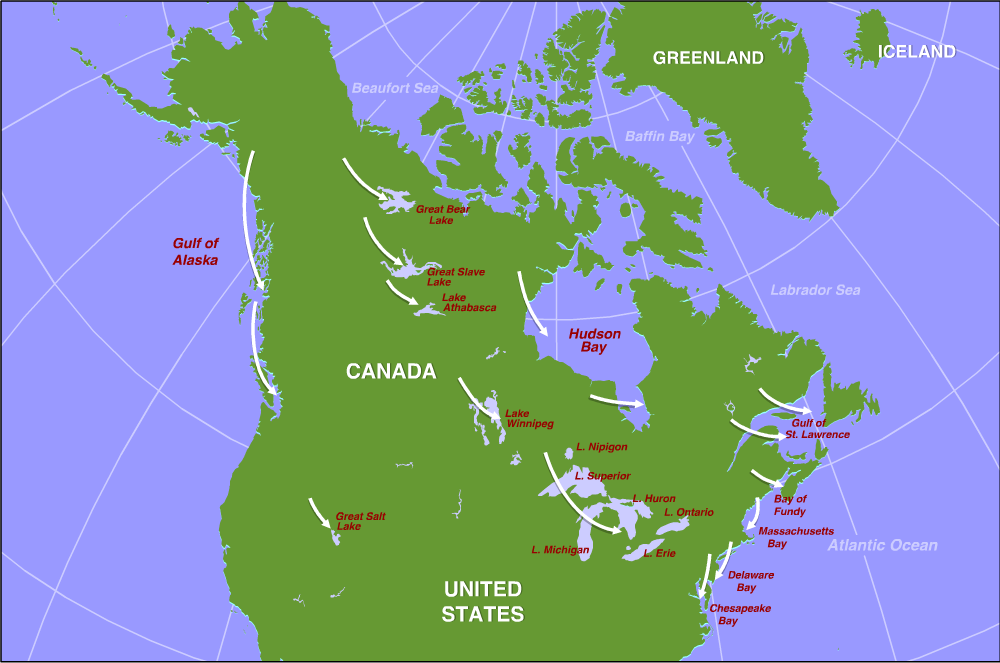 So, what causes lake-effect snow? Well, for starters, air temperature is important (cold air is required). More specifically, the difference in temperature between the lake water and the overlying air is critical. As you may recall, large bodies of water have a high heat capacity and tend to be warmer than surrounding land masses from the late fall into the early spring (unless the lake freezes over, of course, which tends to eventually happen to smaller / shallower lakes). Ultimately, cold air flowing over relatively warm lake water is the core of the recipe for lake-effect snow. Specifically, when the air temperature around 5,000 feet is at least 13 degrees Celsius lower (about 23 degrees Fahrenheit lower) than the temperature of the lake surface, the lapse rates are sufficiently large for lake-effect precipitation (meaning that air parcels can become positively buoyant and rise through a deep enough layer to create precipitation-bearing clouds). I should also note that if these are conditions are met, but the atmosphere isn't cold enough for snow, lake-effect rain can occur (which tends to happen earlier in the fall).

As cold, dry air flows over relatively warm lake waters, warmth and moisture are transferred from the lake to the overlying air, and as air parcels become positively buoyant, convective mixing begins to occur. The longer the "fetch" (the length of water over which the wind blows), the deeper the convective mixing gets, and eventually clouds become tall enough to generate precipitation. If elevated terrain additionally forces air upward as (or after) it comes onshore (orographic lifting), lake-effect snows can become even more impressive. This schematic showing convective clouds growing as air cold air flows over a relatively warm lake should give you a good visual on the process. As a general rule, the fetch must be at least 75 kilometers (slightly less than 50 miles) to allow for enough time for sufficient heat energy and moisture to be transferred into the air above the lake for lake-effect precipitation.

Lake-effect snow tends to form in bands, and for that to happen, vertical wind shear in the lower troposphere must be fairly weak (wind direction, in particular, must not change very much with increasing height). The bands of convective lake-effect clouds can really be stunning on satellite imagery, as shown in the satellite image of lake-effect snow bands on Lakes Superior and Michigan on December 5, 2000 (below). As you might have guessed, the wind flow in the lower troposphere was generally from the northwest, and the "streets" of cumulus clouds followed suit with their northwest to southeast orientation. 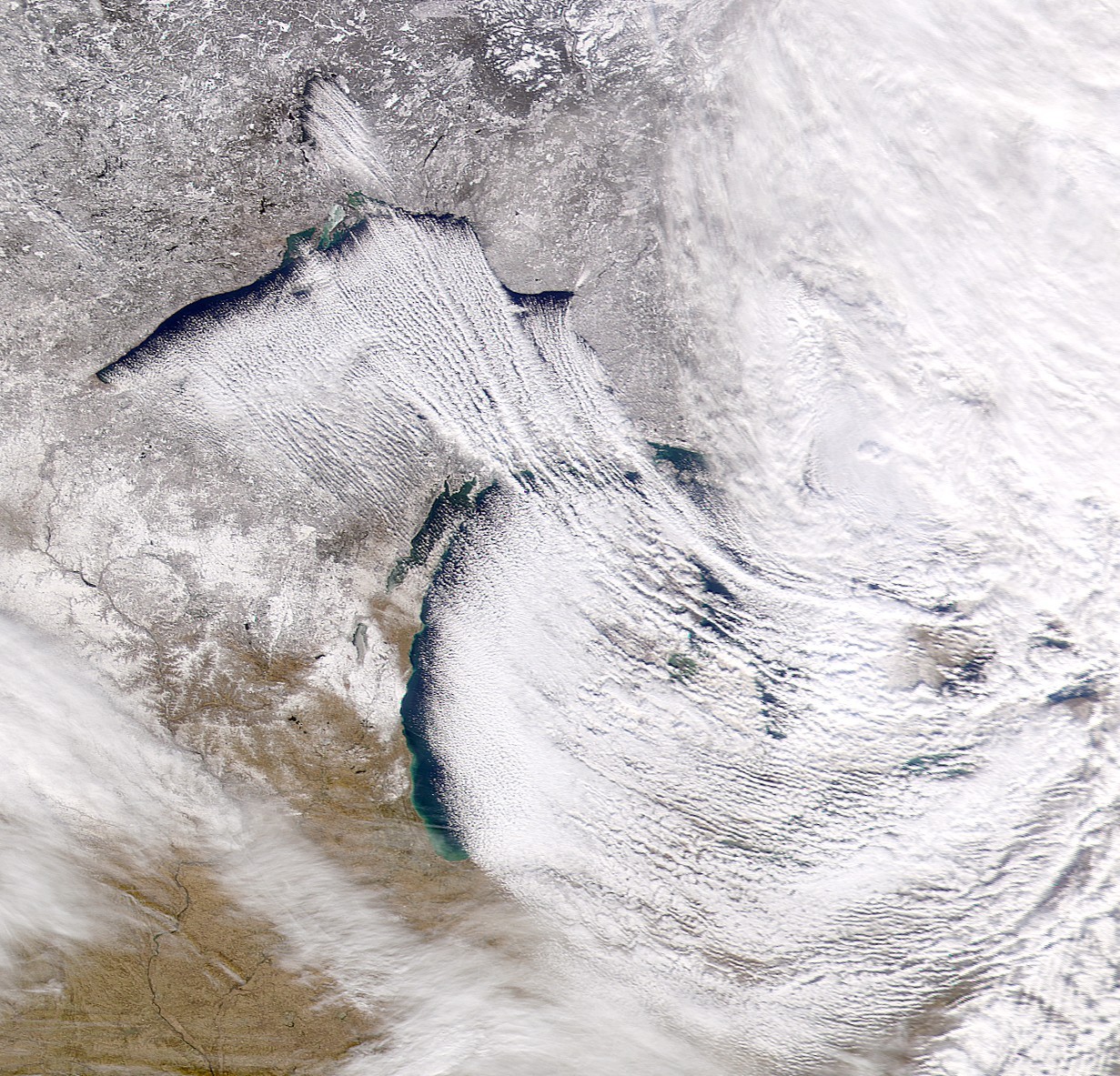 When heavy snow bands form and are nearly stationary, the snow totals can be truly jaw dropping. For example, on December 25 and 26, 2017, Erie, Pennsylvania received 60.5 inches of snow, breaking the Pennsylvania state record for snowfall in two days. The culprit was a nearly stationary lake-effect snow band (you can watch the monster snow band take shape on this nine-hour radar loop from the evening and overnight hours of December 25-26). When temperature differences between the water and overlying air are particularly large (especially early in the season in November and early December), the positive buoyancy of air parcels can be strong enough to create updrafts fast enough to electrify the clouds, creating lightning. Indeed, "thundersnow" is more common in the Great Lakes region than in surrounding states because of convective, lake-effect snows.

Another consequence of the banded nature of lake-effect snow is that a distance of only a few miles can mean the difference between getting buried under heavy snow and hardly getting any snow at all, which can create big challenges for weather forecasters! Driving in the vicinity of lake-effect snow bands can also be particularly dangerous because conditions can change very quickly from sunny or partly cloudy skies to near zero visibility and heavy snow. Such rapidly changing conditions are also the hallmark of another more general convective snow phenomenon -- snow squalls.

By definition, a snow squall is an intense, short-lived burst of heavy snow that's often accompanied by gusty winds. Snow squalls cause a quick reduction in visibility and often result in a quick accumulation of snow. Lake-effect snow can sometimes qualify as a snow squall, although it's not always short-lived. The most common breeding ground for snow squalls is near strong cold fronts which mark the arrival of Arctic air in the winter. Some complex processes near these fronts, along with strong low-level convergence, can result in strong upward motions, and even though parcels typically aren't strongly positively buoyant, upward velocities can still be sufficient to generate heavy snow and occasionally lightning and thunder. 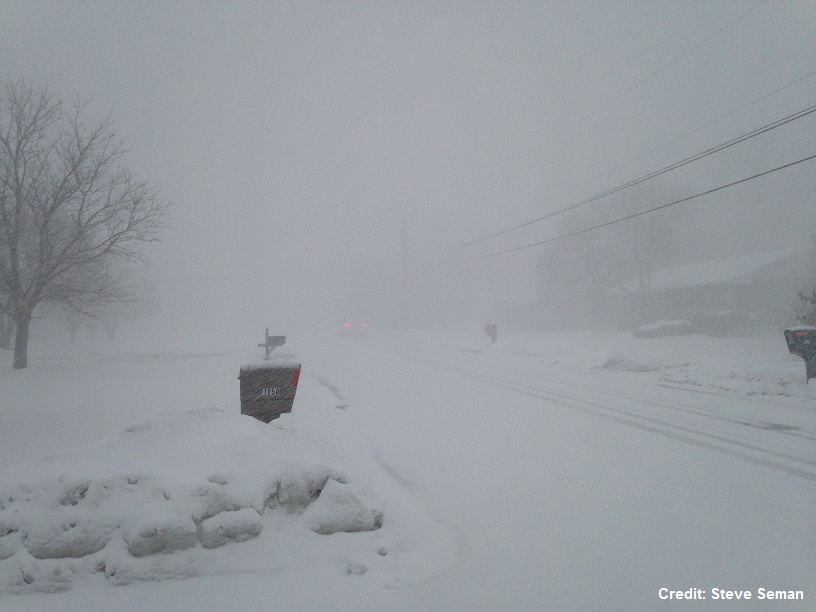 Visibility can rapidly deteriorate in a snow squall. In this case, visibility was reduced to a few hundred feet during this squall in State College, PA during February 2015.
Credit: Steve Seman

The combination of a quick burst of moderate or heavy snow and gusty winds can create a life-threatening situation for drivers as visibility can rapidly drop to near zero ("whiteout conditions") and roads become slippery as snow accumulates quickly. Indeed, while big, long-lived snowstorms often take the headlines, they're often not the most deadly in terms of travel accidents. Big, long-duration snowstorms are usually predicted more than a day in advance, allowing people to plan ahead and not travel during the worst conditions. But, the sudden nature of snow squalls often catches travelers off guard, especially on limited-access highways, such as interstates. The end result can be deadly high-speed accidents and multi-car pileups. For a scary example, check out this short video taken on Interstate 94 in Michigan in January 2015, when nearly 200 cars were involved in a pile up (Warning: contains adult language and potentially disturbing images / sounds).

If you watch the video, you'll see how these pileups occur: drivers are going too fast for conditions and simply have no idea what lies ahead of them. Once they realize it, it's too late, and roads are too slippery to stop in time. Highways can be closed for hours (or days) before a massive pileup can be completely cleared away. Given the dangers posed by travel during snow squalls, the National Weather Service is trying to improve public awareness about snow squalls and has created snow-squall related forecast products. This short video (3:29) from January 2018 that Dr. Jon Nese created for Penn State's Weather World television program shows just how common snow-squall related major accidents are and summarizes what the National Weather Service is doing to help alert the public about impending snow squalls.

While snow squalls can happen just about anywhere that wintry weather occurs, the Great Lakes region again tends to be a hotbed for them. If you watched Dr. Nese's video, you saw that there were nine major pileups related to snow squalls on Pennsylvania highways alone in just a six year period. Hopefully, improved warning about snow squalls will reduce the number of snow-squall related accidents. It's always a good idea to stay up on the latest weather forecast to see if snow squalls are possible. If they are, you may want to delay your travel, or if you must travel during times when snow squalls will be around, make sure to reduce your speed, turn on your headlights, and prepare for driving conditions that can change in a matter of seconds. Slamming on your brakes often results in losing control of your vehicle in slick conditions, which increases the odds of multi-vehicle crashes. But, ultimately, there is no safe place on a highway in a snow squall, so it's best to get off the highway entirely if possible when they occur.

Snow squalls give a good example of a danger posed by convective weather, but we've just scratched the surface. In the next lesson, we'll focus on a wide variety of dangerous weather caused by convection, with a main focus on severe thunderstorms.