Thunderstorms tend to be most frequent over continents in areas where strong solar heating favors positively buoyant air parcels and convection. The greatest frequency of lightning occurs over equatorial Africa, and other low-latitude land areas also have relatively high frequencies of lightning. In fact, some equatorial locations experience thunderstorms on about half the days each year, on average. 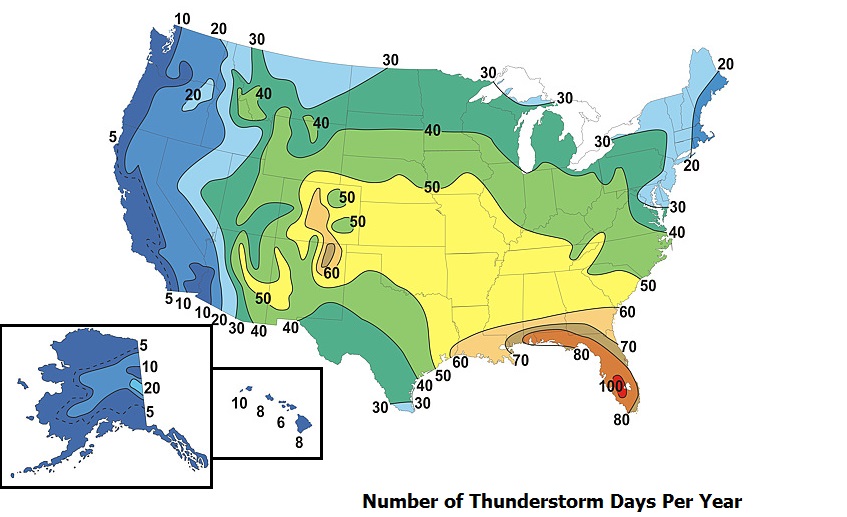 The map showing the average number of "thunderstorm days" per year shows that thunderstorms are most frequent along the Gulf Coast in the Southeast U.S. (especially in Florida). A relative maximum also exists over the central Rocky Mountains.
Credit:Adapted from the National Weather Service

The frequent occurrence of thunderstorms in the Southeast U.S. over toward the Great Plains results from the regular presence of warm, moist maritime-Tropical air from the Gulf of Mexico. Especially in the warmer months, this warm, humid air often favors positively buoyant air parcels that can blossom into cumulonimbus clouds and thunderstorms. But, this map has a couple of interesting features that I want to explore further. In particular, Florida takes the trophy for most thunderstorms in the U.S., on average, with parts of Florida experiencing thunderstorms more than 100 days per year, on average. Furthermore, there's a curious maximum in thunderstorm frequency over the central Rocky Mountains in Colorado and New Mexico (60+ days per year with thunderstorms, on average). You might not think of the Rockies as a "hotbed" for thunderstorms, but indeed, they are! Let's explore the reasons why thunderstorms are so frequent in Florida and the Rockies. Up first -- Florida.

The main reason for many of the thunderstorms in the warmer months along the Gulf Coast and over Florida is a small-scale wind circulation called the "sea breeze." If you've ever noticed a strong, cooling onshore breeze that often develops in the afternoon at the beach, you've noticed the sea breeze! The sea breeze develops because of uneven heating between land and water. On a sunny day, the land warms more quickly than adjacent ocean waters, which causes the mean density of air columns over land to decrease slightly, which reduces the weight of local air columns and reduces surface pressure. Meanwhile, the air over water remains cooler (and more dense) and an area of high pressure develops offshore. These pressure differences cause low-level air to flow from the water to the land, generating an onshore wind called the sea breeze. In order for a sea breeze to form, the temperature difference between land and water must be large enough to generate a sufficient pressure difference between land and water, and the day otherwise cannot be too windy. If the day is windy before the sea breeze even develops, the winds will overwhelm the sea breeze.

The sea breeze is actually a three-dimensional circulation, in which low-level air flows onshore, rises over land, and then flows offshore aloft (about one kilometer above the surface). But, the boundary between the cooler maritime air flowing onshore and the hotter air over land (called the sea-breeze front), is a source of great interest to weather forecasters because it acts like a miniature cold front, meaning that low-level convergence occurs along it as cooler air pushes onshore. Low-level convergence along the sea-breeze front gives hot, humid air parcels on land an upward nudge, and sometimes that's all they need. Their positive buoyancy takes over and off to the races they go, growing into cumulonimbus clouds and thunderstorms.

The regular occurrence of sea breezes is a big reason behind the high frequency of thunderstorms along the Gulf Coast and Southeast Coast of the U.S. But, why is Florida, in particular, such a prime area for thunderstorms? Of course, an abundance of warm, moist maritime-Tropical air is a helpful ingredient because it favors positively buoyant air parcels. But, the schematic below tells the rest of the story. On sunny days with fairly weak winds overall, there's often not just one sea-breeze front in Florida; sea-breeze fronts press inland from both the Atlantic Ocean from the east and the Gulf of Mexico from the west.

Thunderstorms sometimes develop over the Florida peninsula as sea-breeze fronts from the Atlantic and Gulf Coasts collide.
Credit:David Babb

In addition, lakes and other smaller bodies of water can also create circulations similar to the sea breeze. In Florida, "lake-breeze" fronts can push onshore from Lake Okeechobee, for example. So, the combination of sea-breeze fronts and a lake-breeze front from Lake Okeechobee means that there are boundaries galore in Florida, as this annotated visible satellite image from May 5, 2007 shows. Each boundary has low-level convergence along it, and when these boundaries collide, the low-level convergence can get even stronger, which gives air parcels a stronger push upward, initiating thunderstorms if the air parcels happen to be positively buoyant. To see a real example, watch numerous thunderstorms blossom over Florida on this loop of visible satellite images from May 30, 2002. The corresponding radar loop shows the numerous storms that developed, which brought heavy rain and hail. So, the regular presence of air parcels that can become positively buoyant and a plethora of boundaries and low-level convergence to give parcels a push upward makes Florida the thunderstorm (and lightning) capital of the U.S.!

What about the maximum in thunderstorm frequency over the Rocky Mountains in Colorado and New Mexico? How could a mountainous region favor thunderstorm development? In a nutshell, it comes down to uneven heating again. On a sunny day with weak winds overall, as the sun heats the mountain, surface air in contact with the mountain warms, causing air density and, thus, air pressure to decrease (relative to the surrounding "free atmosphere" not in contact with the mountain). In this way, mountains serve as "high-level heat sources," and the resulting pressure gradient causes air to move toward and up the mountain as shown in the schematic below. 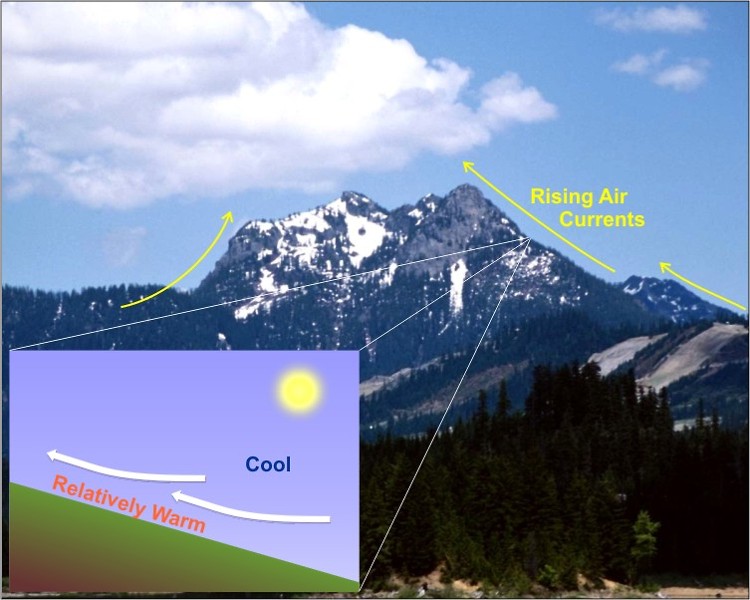 When mountains act as high-level heat sources, initially sunny days with weak winds in the Rockies often aren't very sunny by afternoon. For example, I took this photo in Rocky Mountain National Park in Colorado on an initially sunny day in August, 2006. As commonly happens in the summer, numerous cumulus clouds built throughout the afternoon, which eventually became thunderstorms. To see an example on satellite, check out this sequence of visible satellite images (from 12Z, 17Z, and 21Z on July 7, 2001), and watch the cumulonimbus clouds develop. If you compare the sequence of images with this relief map cropped to the same view, you'll see that the thunderstorms developed over the mountaintops.

So, there's no doubt that topography can play a crucial role in initiating thunderstorms, and that's why thunderstorms are more frequent over parts of the Rockies compared to their surroundings. You may also be wondering why relatively few thunderstorms occur west of the Rockies. The simple answer is that the region lacks a source of warm, moist air needed for positively buoyant air parcels. The Pacific Ocean along the West Coast is actually fairly chilly, and as that cool air flows onshore, it tends to stabilize the atmosphere (favoring negatively buoyant parcels). So, the instability needed for thunderstorms is less common in the western U.S., leading to less frequent thunderstorms there (the same can be said for parts of the northern U.S., too).

But, even though some areas experience less frequent thunderstorms, they can happen anywhere in the United States and most land areas of the world. Chances are just about everyone has been affected by a thunderstorm at one time or another (if not many times!). If we want to learn more about thunderstorms, we need to examine their anatomy and life cycle. We'll start exploring those topics in the next section.