When you're finished with this section, you should be able to describe the life cycle of a single-cell thunderstorm (including characteristics of the cumulus, mature, and dissipating stages). You should also be able to define the following terms -- updraft, entrainment, downdraft, gust front / outflow boundary, and anvil.

Have you ever heard a weather forecaster predict "random" afternoon "pop-up" thunderstorms on a summer day? In hot, humid summer air masses, it may seem that thunderstorms erupt rather randomly. But, thunderstorms never really erupt randomly, even if it appears that way. Think about it: "Random" thunderstorm development would mean that they develop on a whim, for no reason at all. As you've learned, thunderstorms tend to form when air parcels can become positively buoyant after being given a nudge upward (perhaps from low-level convergence along a cold front or sea-breeze front). Still, sometimes thunderstorms seem awfully disorganized. Take, for example, this image of radar reflectivity from 2055Z on June 14, 2015 and note the widely scattered thunderstorm cells across the Southeast U.S.

These disorganized, individual thunderstorm cells that are sometimes referred to as "random pop-up" thunderstorms are single-cell thunderstorms. The reason they often appear random is because we don't have the capability of predicting exactly where and when local conditions are just right for storm initiation. Typically, very subtle regions of uneven heating (which we can't measure directly with our network of weather observations) create very small areas of low-level convergence that give parcels an upward nudge, setting the stage for thunderstorms. We're still a long way from being able to regularly make such observations and predictions skillfully, so keep that in mind when you hear forecasters make bold claims about their ability to give hyper-local weather forecasts and predict storms "in your backyard." With that said, let's take a closer look at the development and life of single-cell thunderstorms.

The Life-Cycle of Single-Cell Thunderstorms 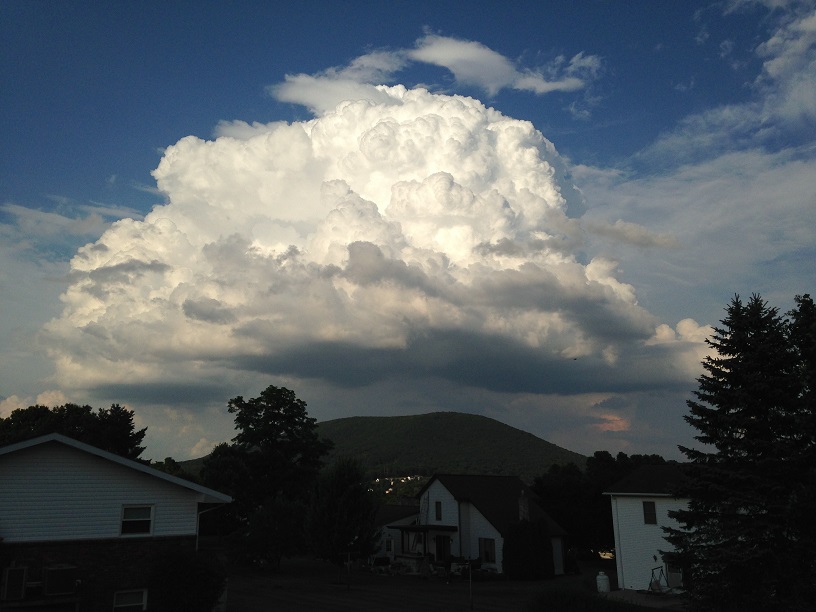 Essentially, single-cell thunderstorms go through three distinct stages during their lives, but the process gets started when positively buoyant air parcels rise to the point of net condensation, forming cumulus and perhaps cumulus congestus clouds (like the one in the image on the right) typically in the late morning or early afternoon hours. Eventually, a single rising column of positively buoyant air emerges, which is called the updraft, as the warming that occurs in the cloud because of net condensation increases the positive buoyancy of the air parcels.

But, these initial cumulus or cumulus congestus clouds typically don't become thunderstorms. Why is that? Well, when working with air parcels, we assume that the air in the parcel doesn't mix with its surroundings, which is unrealistic. In reality, positively buoyant air parcels that comprise the updraft of a growing cumulus cloud actually do mix with surrounding cooler, drier air in a process called entrainment, which is bad news for aspiring cumulus clouds. Indeed, as cumulus clouds build skyward above the lifting condensation level (which marks the cloud base, as you may recall), the entrainment of drier air causes some cloud droplets to evaporate. Cooling associated with evaporating cloud drops increases the density and reduces the buoyancy of the air parcels, and by the time the cumulus builds to a depth of about one and a half times its diameter at the lifting condensation level, the air loses its buoyancy. All is not lost, however. These initial cumulus clouds, which ultimately "fizzle out," serve a purpose, and help pave the way for thunderstorm development. Let's explore the process, as we investigate the first stage in a single-cell thunderstorm's life cycle -- the cumulus stage.

While initial cumulus clouds often die, they do not die in vain. New cumulus clouds often develop in the same column as the original cumulus, and they benefit from the water vapor from cloud droplets that evaporated earlier. Entrainment into the developing new cumulus still occurs, but the air mixing into the cloud has a higher relative humidity than before, which as you may recall, leaves less potential for net evaporation (and evaporational cooling). If there's a sufficient supply of low-level moisture and persistent positively buoyant parcels over time, a succession of cumulus clouds can now grow and ebb in a single column of air. Eventually, clouds graduate from fair-weather cumulus to towering cumulus congestus.

The presence of towering cumulus indicates a dramatic change in the tenor of the convection. During this stage, the growing towering cumulus cloud is dominated by updrafts, and updrafts accelerate to roughly 10 meters per second as air from miles around converges to feed the updrafts. Near the end of the towering cumulus stage, the cloud becomes very high and cold, and the top portion of the cloud becomes "glaciated" (composed of ice crystals), causing it to take on a slightly fuzzy or fibrous appearance. The die has been cast and a majestic cumulonimbus cloud is born.

Not surprisingly, this new phase in the life of an single-cell thunderstorm is the mature stage (see schematic below). Although somewhat arbitrary, the mature stage begins once precipitation reaches the ground. But, the hallmark of the mature stage is the simultaneous presence of an updraft and downdraft within each cell. Downdrafts develop for essentially two reasons: the drag exerted by falling raindrops, and cooling associated with the evaporation of small raindrops (via entrainment). Evaporational cooling increases the density of descending parcels of air, increasing their negative buoyancy and downward acceleration. 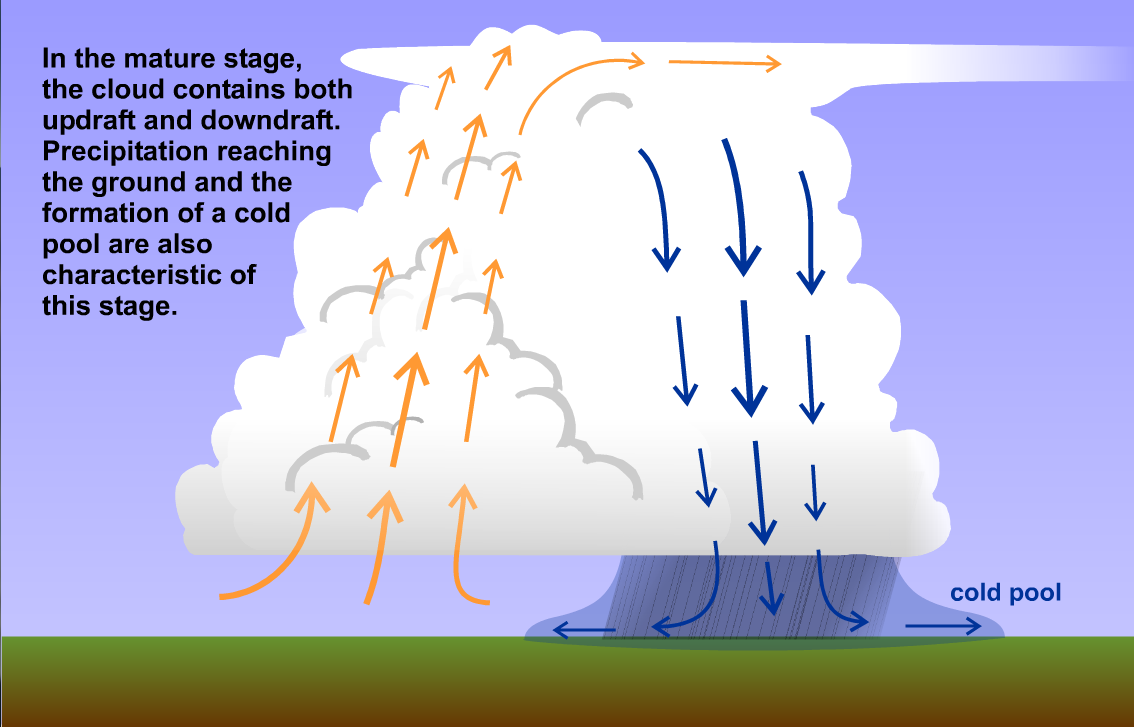 A schematic of the mature stage of a single-cell thunderstorm. Note the simultaneous presence of an updraft and a downdraft. Also note that precipitation does not usually fall straight down into the core of the updraft. Rather, precipitation moves a bit horizontally with upper-level winds before falling into air with lower relative humidity (below the cloud base).
Credit: David Babb

When evaporational cooling is operating on all cylinders, it can produce strong downdrafts. To give you an idea of just how strong, if the temperature difference between a sinking air parcel and its environment stays at one degree Celsius during its descent of, say, five kilometers, the downdraft speed can approach 20 meters per second (39 knots; 45 miles per hour). As a general rule, precipitation does not fall straight down into the core of the updraft. Rather, precipitation moves a bit horizontally with upper-level winds before falling air with lower relative humidity, paving the way for evaporational cooling and downward acceleration. When downdrafts "splashdown" at the ground and spread out, they can produce gusty winds. Although single-cell storms don't often produce damaging wind gusts, they can do so on occasion (particularly vigorous single-cell thunderstorms are referred to as "pulse storms").

The splashdown and subsequent spreading out of the downdraft at the ground is akin to water from a kitchen faucet hitting the sink below. Meteorologists refer to the gathering "puddle" of rain-cooled air spreading out along the ground as a "cold pool," which in general tends to be about one to two kilometers deep. After splashdown, the leading edge of this horizontally spreading rain-cooled air is called a gust front or, more formally, an outflow boundary (because it is a boundary between rain-cooled air and the unmodified air mass). You may think of a gust front as a miniature cold front. Gust fronts associated with single-cell thunderstorms can spark other thunderstorms (warm, moist air converging at the gust front is forced to rise), but, most times they don't.

The bottom line here is that the mature stage of a single-cell thunderstorm is exactly what its name suggests--a period when the storm is the most vigorous. Updrafts attain their fastest speeds. Lightning is most frequent. Rain is heaviest. Radar reflectivity is greatest. Cloud tops are highest. When air parcels rise to the top of the troposphere, they quickly become cooler than their surroundings above the tropopause (the stratosphere is stable), which means they become negatively buoyant and slow to a halt. With the tropopause acting like a "lid" in this sense, air parcels spread out horizontally along it to form the glaciated anvil (the flat, spreading top of a cumulonimbus cloud). Single-cell thunderstorms occasionally may also produce small hail in the mature stage (usually not large enough to cause damage), but all of this vigor is fleeting, with a single-cell's mature stage lasting ten minutes or so. The dissipating stage of the cell comes quickly.

The quick end to the mature stage of a single-cell thunderstorm is self inflicted, as the rain that the storm produces ultimately seals its own fate. Indeed, the rain-induced downdraft that splashes down and spreads out laterally inevitably cuts off the inflow of warm, humid air into the storm's updraft. Cut off from a supply of buoyant, maritime-Tropical air, the single cell's updraft weakens. The writing is now on the wall. With the updraft fading and precipitation still sustaining the downdraft (albeit weaker because rainfall rates have also decreased), the downdraft now dominates the single-cell storm, a state which defines the dissipating stage. 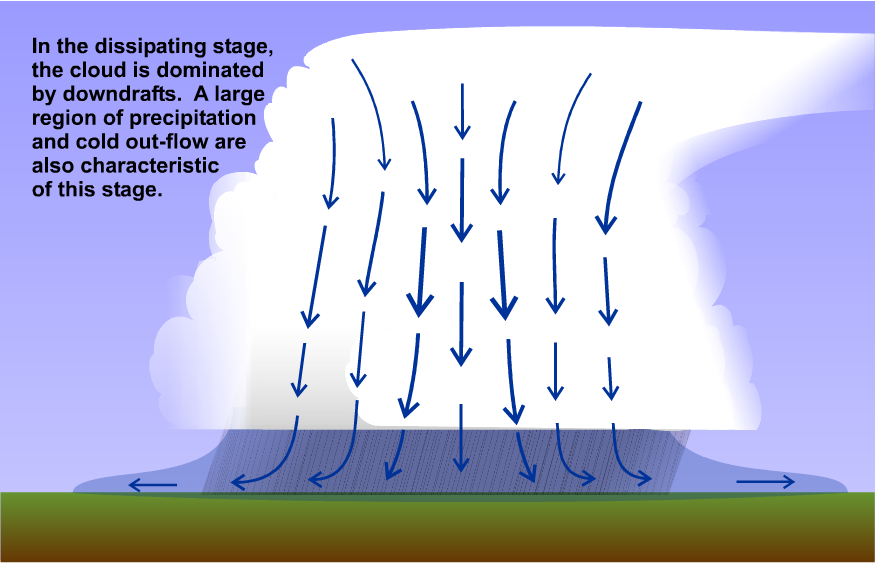 In the dissippating stage of a single-cell thunderstorm, the cloud is dominated by downdrafts, and a large area of precipitation and cold outflow are present.
Credit: David Babb

The storm's demise is rather quick. Sinking air in the downdraft causes small cloud droplets to evaporate, and once the updraft fades, residual raindrops can "scavenge" cloud droplets as they fall, further eating away at the cumulonimbus cloud. As a result, the once majestic towers that characterized the mature stage of the storm gradually vanish. Indeed, the anvil may become the sole remnant of the single-cell storm.

The birth, life, and death of a single-cell storm typically takes less than 45 minutes. Once downdrafts become dominant and a storm "rains itself out" as the cold pool grows larger and cuts off the storm from warm, moist air for its updraft, the storm dies. To recap the stages in the life of a single-cell thunderstorm, I created a short video (3:22) highlighting the key characteristics of each stage and their corresponding presentations on idealized radar imagery.  Check it out below:

One of the reasons for the fleeting nature of single-cell thunderstorms has to do with the fact that they form in environments with "weak vertical wind shear," meaning that wind speeds and directions change very little with increasing height (here's an example of what a wind profile with weak shear might look like). It's this weak vertical wind shear that allows the storm's downdraft to fall very near the updraft, and allows the storm's gust front to race outward far from the storm, because weak low-level winds blowing relative to the moving storm cannot restrain the movement of the dense cold pool. Effectively, new cumulus forming along the gust front hog all the moisture, hastening the storm's demise. What happens when thunderstorms form in environments where vertical wind shear is stronger? In short, thunderstorms don't quite follow the model we studied in this section. We'll explore further beginning in the next section.