At one point or another, you've probably heard a weather forecaster use the term "low-pressure system," but perhaps you've never heard it called by its formal name -- mid-latitude (or extratropical) cyclone. Indeed, as long as you live in the middle latitudes (where the United States, most of Canada, Europe, and Asia lie in the Northern Hemisphere), the phrase "low-pressure system" really refers to a mid-latitude cyclone. Mid-latitude cyclones are responsible for much of the "active" weather that you experience from day to day. If it's raining, snowing, very windy, etc., there's a good chance that a mid-latitude cyclone is involved somehow! In the winter, weather with mid-latitude cyclones can be especially dramatic. For example, check out the photo below, taken after the "Snowmageddon" (not a technical term) storm that struck the mid-Atlantic states on February 5-6, 2010. When the storm finally moved out to sea, many of the affected residents emerged to find snow totals between 20 and 39 inches! 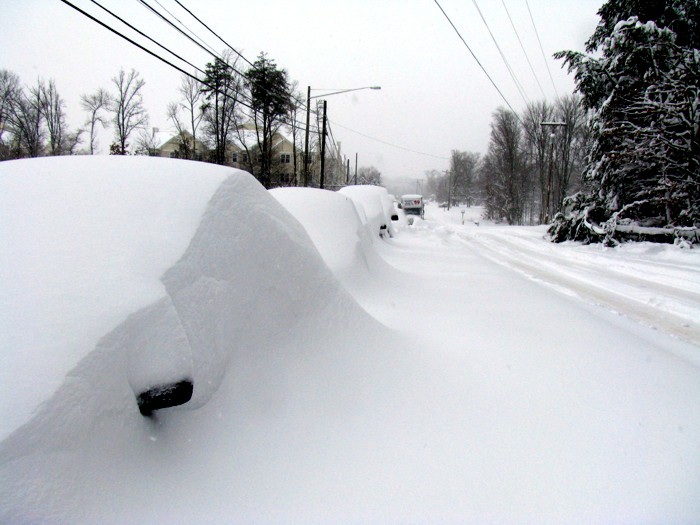 The aftermath of a strong mid-latitude cyclone which moved across the mid-Atlantic states on February 6, 2010.  This picture was taken near Washington, D.C. (in northeast Virginia). Dulles International Airport recorded a snowfall total of 32.9 inches over the two day period.
Credit: Burried / Aaron Foltz / CC BY-NC-ND 2.0

So, it's pretty easy to see why weather forecasters would be interested mid-latitude cyclones! Much of what we know about how mid-latitude cyclones work is based on a model (called the "Norwegian Cyclone Model") developed by Jacob Bjerknes and Halvor Solberg in 1922, and there's no doubt that this model has shaped the way that meteorologists understand the weather that occurs in the middle latitudes.

This lesson will require you to put some "pieces together" from previous lessons, including convergence and divergence, air masses, fronts, gradients, and temperature advection, so we'll do a little reviewing along the way, too. Of course, if you feel rusty any on of these topics, don't hesitate to go back and review. Up first, I want to establish a framework about why mid-latitude cyclones exist in the first place. Let's get started!