Lesson 10: The Human Impact on Weather and Climate

So far in the course, our focus has been on weather. The topics we've covered generally, in one way or another, can be applied to day-to-day weather observations, forecasts, or safety. But now, we're going to shift away from issues of short-term weather and examine issues related to longer-term climate. We talked a bit about climate previously, in terms of long-term averages and extremes of temperature and precipitation for a given location (over the course of a few decades to a century or so). In this lesson, however, we're going to think bigger picture and examine climate on the scope of centuries or longer over the entire globe.

On these larger time and space scales, climate is not static; a variety of natural factors cause the climate to change. For example, millions of years ago, when dinosaurs roamed the earth, our world was likely warmer than it is now. In fact, evidence suggests that during that time, Earth was warm enough that it had no polar ice caps or ice sheets at all. On the other hand, Earth has gone through "ice ages," when it has been cold enough that ice sheets have expanded well outside of the polar regions. In fact, the Great Lakes formed more than 10,000 years ago when a huge continental ice sheet melted as Earth warmed.

So, there's no doubt that Earth's climate can change dramatically (albeit very slowly) due to natural factors. But, what about recent climate changes? Are they all natural? More than a century of research overwhelmingly indicates that human activities are contributing to climate change, too, and the potential impacts have sparked a fiery debate about how society should adapt and evolve. I suspect that most everyone has seen or read stories about climate change or global warming, and if you search around online, you can find articles with a wide range of takes. There's a lot of "noise" about climate change out there, and if you're uninformed about the basic science, it can be hard to separate fact from fiction. 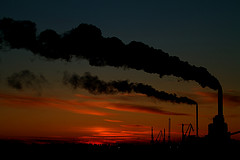 One factor in human-induced climate change is emissions of carbon dioxide from the burning of fossil fuels (note that you cannot see the carbon dioxide in this image, since it's an invisible gas).
Credit: #431 / Mikael Miettinen / CC BY 2.0

You won't be a climate-change expert by the end of this lesson, but you should be able to better cut through the "noise" and separate climate-change fact from climate-change fiction. We'll explore the basic physics of climate change, the questions currently being asked by researchers, and some of the challenges that scientists face when trying to answer these questions. Specifically, we'll examine the major natural factors that can impact climate, and we'll examine a number of ways that human activities impact weather and climate on local to global scales. "Global warming" caused by an enhanced greenhouse effect will be one of our main topics, but as you'll see, the role that humans play in weather and climate is much broader than that. We'll also cover computer modeling of global climate, connections between climate change and extreme weather, and see how society has dealt with the affects of chlorofluorocarbons on ozone.

I think that most people would agree on the importance of these topics and in making wise decisions concerning our future as stewards of our planet. I hope that in the end you will be enriched by this lesson, and learn more about a topic that will likely remain in the forefront of our culture for many years to come. Let's get started by looking at some ways that human activity impacts local weather and climate.