‹ Predicting the Misty, Distant Future Lesson 11: Patterns of Wind, Water, and Weather in the Tropics ›

Once you've finished this page, you should be able to describe the effects of the stratospheric ozone layer, and ozone that forms low in the troposphere from air pollutants. You should also be able to name the class of human-made chemicals that destroys ozone and contributes to "greenhouse" warming, define the ozone hole and its location, and describe the actions that were taken to limit the depletion of ozone.

High above Earth's surface lies an "invisible shield" of sorts, which helps protect humans from the harmful effects of ultraviolet radiation from the sun. The invisible shield is the ozone layer located in the stratosphere, which starts about 10 miles above the surface and contains about 90 percent of all the ozone molecules in the atmosphere. Some ozone also exists in the troposphere, when industrial pollutants react in the presence of sunlight. Ozone itself is actually toxic to humans (it contributes to a variety of respiratory problems), and also harms plant life. So, ozone near the surface is harmful, but ozone high up in the stratosphere (where there are no people who need to breathe) is essential to life on the planet.

In the stratosphere, ozone absorbs ultraviolet radiation from the sun (specifically, harmful "UV-B" radiation), preventing it from ever reaching Earth's surface. That's a great thing for humans, because overexposure to UV-B radiation increases the likelihood of skin cancer, cataracts, and immune deficiencies in humans, and is harmful to marine phytoplankton that form the base of the ocean's food chain. Because of the threats posed by excess ultraviolet radiation, weather forecasts commonly include a "UV Index" (a scale from 0 to 11+), which was introduced in the 1990s to help people take precautions to protect their skin and eyes. 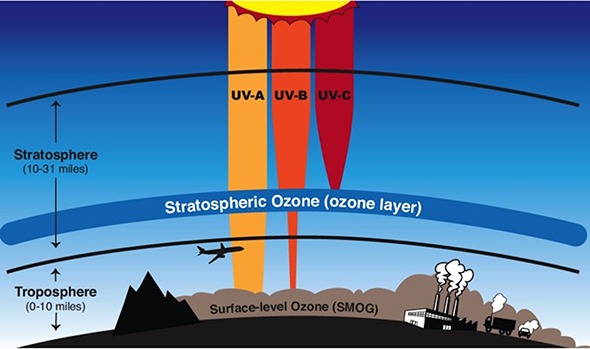 Ozone in the stratosphere serves the crucial role of blocking harmful UV-B radiation from humans. Meanwhile, ozone can form near the surface when constituents of air pollution react in the presence of sunlight.
Credit: NASA

An ozone molecule consists of three oxygen atoms (its chemical symbol is O3), and its maximum concentration in the stratosphere is a result of ultraviolet radiation's interactions with oxygen gas (O2 -- the gas that humans need to breathe). When oxygen gas absorbs ultraviolet radiation, the oxygen atoms split. Some of the lone oxygen atoms bond with other lone oxygen atoms to create oxygen gas again, but some of the lone atoms actually bond with existing oxygen gas molecules to form ozone (O3). When ozone absorbs ultraviolet radiation, the ozone molecule is destroyed, creating an oxygen gas molecule (O2) and a single oxygen atom. Of course, these constituents can rebond to form ozone again, and a rough balance exists between natural processes in the stratosphere that create and destroy ozone. Some natural variations in ozone concentrations do exist (ozone levels vary by a couple of percent in connection with solar cycles, for example); however, human emissions have changed that approximate balance and led to a gradual decline in ozone.

In the 1920s and 1930s, engineers at General Motors were trying to develop refrigerants that weren't toxic or flammable. The culmination of their work was a class of chemicals called chlorofluorocarbons (CFCs), which are gaseous compounds of chlorine, fluorine, and carbon. CFCs were originally branded as "freon," a name which still gets used generically today, even for refrigerants which are not CFCs. Over time, use of CFCs expanded into aerosol cans and the production of foams and packing agents (like Styrofoam). Initially, CFCs were viewed as rather benign compounds because they are so "stable," meaning they're reluctant to react with other chemicals.

Later, CFCs were discovered to be greenhouse gases, although their concentrations are tiny compared to water vapor, carbon dioxide, and methane. More importantly, the fact that they don't react with many other gases and don't dissolve in water means that once they're released into the atmosphere, they stay there for a long time. With the rising and sinking air motions in the troposphere, inevitably, some CFCs get mixed up into the stratosphere (a fact which wasn't discovered until 1974), where it turns out, they're not so benign. In fact, CFCs end up being "ozone killers." I won't go into the nitty-gritty chemistry details, but basically, when a CFC molecule absorbs ultraviolet radiation, a chlorine atom gets separated, and the "loose" chlorine atom reacts with an ozone molecule, destroying the ozone molecule. What's worse is that the chlorine compound that forms in the process is also highly reactive, so it readily reacts with other molecules to free up the chlorine atom again, which allows the chlorine atom to go destroy more ozone molecules.

British scientists had been measuring ozone over Halley Bay (along the Antarctic Coast) since the late 1950s, but in the early 1980s, a group of British scientists led by Joseph Farman, noticed a gradual decline in ozone concentrations each year becoming more noticeable starting around 1975. In fact, Farman doubted his own data at first because nobody else had ever observed such low concentrations of ozone. American scientists were also measuring ozone via a NASA satellite, but didn't notice a decline. 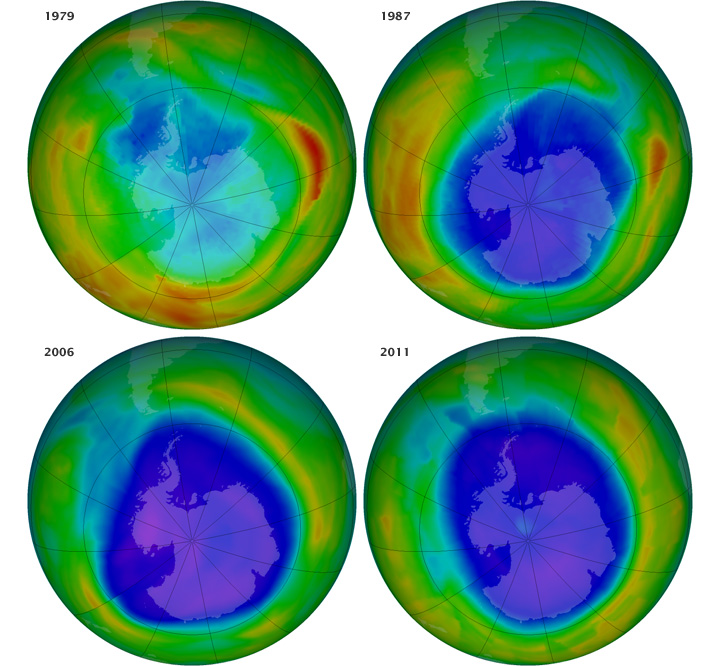 Satellite observations show the state of the ozone hole in September of 1979, 1987, 2006, and 2011. Lowest concentrations of ozone (measured in Dobson Units) are marked by blue and purple areas. Clearly the loss of ozone worsened after 1979.
Credit: NASA

After the British published their results in 1985, American scientists took another look at their data and found the same depletion of ozone over Antarctica. The American scientists had missed the reduction because their computers had been programed to recognize ozone levels only within the range thought to be "normal." When ozone levels over Antarctica fell below that range, the computers tossed out the numbers as bad observations. Upon looking at the raw data, American scientists saw the same ozone hole that the British scientists had discovered. For the record, the ozone hole is a region in the Antarctic stratosphere where ozone levels dramatically decrease during early spring in the Southern Hemisphere (September - early October). In reality, there's not really a true "hole," but concentrations of ozone molecules decline sharply in the region, essentially creating a "thinning" of the ozone layer. The image above shows the state of the ozone hole as measured by satellite in September of 1979, 1987, 2006, and 2011 (blue and purple areas mark the lowest ozone concentrations).

Clearly, the ozone hole has gotten bigger since 1979, but if the ozone hole develops over Antarctica (where almost nobody lives), is it that big of a concern? Yes, because even though the greatest losses of ozone occur over Antarctica each spring (in the Southern Hemisphere), other parts of the globe have lost ozone, too, although not as dramatically. For example, ozone losses over the middle latitudes (where most of the U.S., most of Europe, and Asia are located in the Northern Hemisphere), range between about 3 and 10 percent, which equates to about 5 to 10 percent more harmful ultraviolet radiation reaching Earth's surface. But, why does the most dramatic loss of ozone occur each year over the Antarctic stratosphere? It turns out the answer lies in atmospheric circulations. 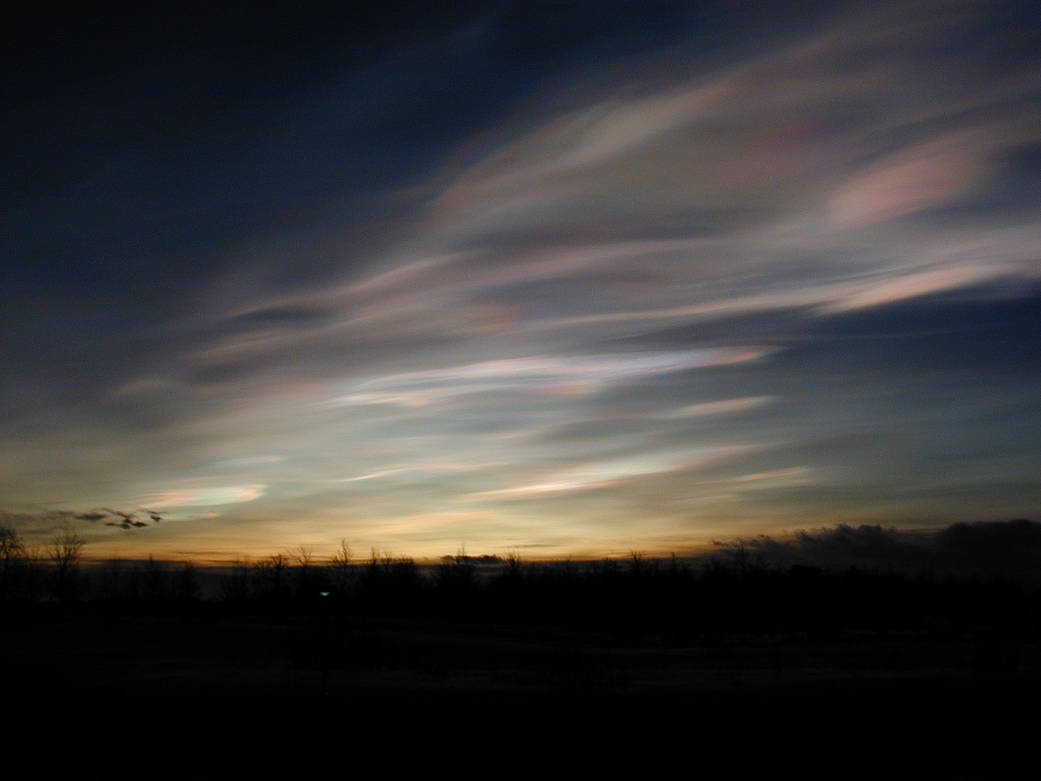 The presence of polar stratospheric clouds aids in the loss of ozone.
Credit: NASA

So, when Antarctic spring begins, and the region sees its first sunlight in months (remember that the sun never rises above the horizon during winter in the polar regions), the ultraviolet radiation and free chlorine atoms are a bad combination for ozone molecules, and concentrations drop, reaching their minimum in early spring. For what it's worth, the Arctic region of the Northern Hemisphere also has a polar vortex that forms in the winter time, but the geographic characteristics of Arctic latitudes (distribution of land masses, etc.) dictate that it's not as strong or consistent as the polar vortex in the Southern Hemisphere. So, while scientists have observed some loss of ozone over the Arctic, it doesn't compare to what happens over the Antarctic each year.

The scientists who first discovered that CFCs can destroy stratospheric ozone predicted a gradual loss of ozone, but leaders of industries that produced CFCs initially resisted the evidence, publicly calling the connection between CFCs and ozone depletion "science fiction" and "too uncertain" for immediate action. Even so, major chemical companies planned ahead and started working on replacement chemicals for CFCs just in case, and by 1986, some replacements, called hydrochlorofluorocarbons (HCFCs) were ready. All the while, surprised by the discovery of the ozone hole, government agencies scurried to better understand ozone depletion, and organized the National Ozone Experiment (NOZE) in 1986. This project strengthened the understanding of how human emissions of CFCs were leading to unnaturally-high levels of chlorine in the stratosphere, leading to ozone depletion.

Recognizing the potential harm to human health, the world's governments reacted by finalizing the Montreal Protocol in 1987, which required CFCs and some other ozone-depleting chemicals to be phased out. U.S. President Ronald Reagan supported the treaty, and the U.S. was one of its early signatories. The treaty went into effect in 1989, and since then has gone through several amendments and has been signed by over 190 nations. The Montreal Protocol is widely seen as the most successful global environmental treaty in history, and since the treaty's implementation, atmospheric CFC concentrations peaked in the late 1990s and have since declined (remember that CFCs can survive a long time in the atmosphere, so getting rid of them entirely will take a long time).

And, the ozone hole? It has stopped growing (it peaked in size in 2006) and seems to have started a gradual recovery, although its exact size varies from year to year based on stratospheric weather. Research published in 2018 demonstrated that the recovery in ozone over the Antarctic is explicitly connected to the decline in CFCs, illustrating the effectiveness of the Montreal Protocol, and current projections suggest that ozone levels should return to pre-1980 levels some time late this century. Interestingly, the initial replacements for CFCs (HCFCs) also destroy ozone, but at a much slower pace because fewer of the molecules can survive into the stratosphere (most react or dissolve in water in the troposphere). So, HCFCs are also being phased out. The replacement for HCFCs are hydrofluorocarbons (HFCs), which pose no threat to the ozone layer because they don't contain chlorine.

However, HFCs (along with CFCs and HCFCs) are extremely active greenhouse gases (much more so than carbon dioxide). While concentrations of these gases in the atmosphere are minuscule (measured in parts per trillion), in order to get ahead of the curve, the member nations of the Montreal Protocol have also decided to start reducing HFC emissions. So, while the solutions are still evolving, ultimately, money spent to develop and implement alternatives to CFCs has helped stop ozone depletion, and has saved an estimated one trillion dollars (perhaps more) through public health benefits (millions of additional skin cancer and cataract cases prevented, for example). So, the case of ozone depletion is one aspect of human-induced climate change in which "buying insurance" is paying off.