If we're going to analyze impacts of human activity on global weather and climate, we need to first have an understanding of what natural factors contribute to changes in the climate on a global scale. After all, remember that at previous times in Earth's long history, it's been warmer than it is now (during the time of the dinosaurs, for example, when no ice caps or ice sheets were present), and it's been cooler than it is now (during various ice ages, for example). So, climate changes can obviously happen with or without human influence.

In this section, I'm going to briefly summarize four major natural factors that contribute to climate changes on a global scale, and describe how these factors have contributed to global temperature changes from the early 1900s through today. The factors I'll focus on are the sun, changes to Earth's orbit, ocean cycles, and volcanoes (and other geologic activity).

The sun is obviously the largest external source of energy for the earth. Our planet wouldn't be inhabitable without warmth from the sun! But, did you know that the energy output from the sun isn't constant? The sun is a "variable star," which means that its brightness changes in time. When the sun emits more energy, the earth warms up a bit. When the sun emits less energy, the earth cools a bit. Not surprising, right? In 1843, scientists discovered a roughly 11-year cycle in solar output by tracking sunspot activity (these cycles have since been reconstructed all the way back to 1755). During this cycle, the amount of energy emitted by the sun varies, as does its sunspot activity, as demonstrated in the image below showing the varying appearance of the sun each year from 1996 to 2006, during Solar Cycle 23 (the 23rd cycle since 1755). 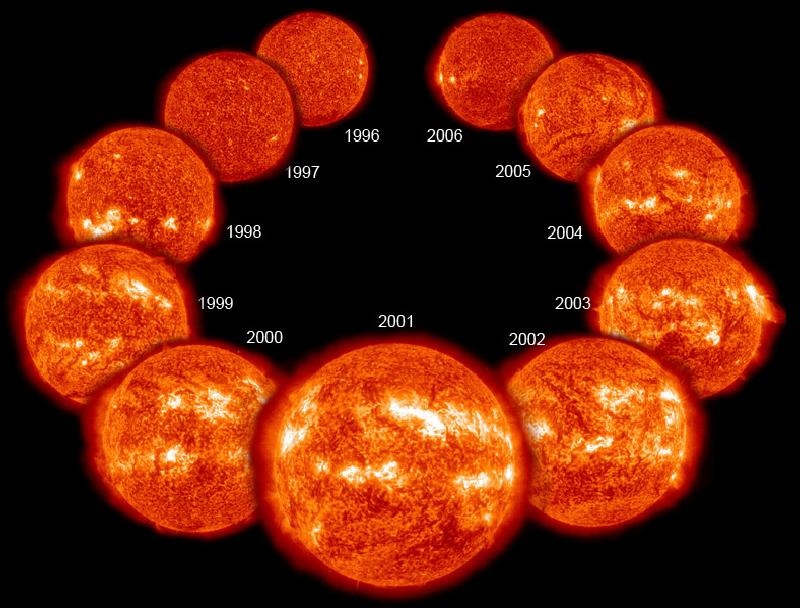 Solar energy output also varies gradually on longer time scales. In other words, its peak intensity during each solar cycle is not the same. During most of the 20th century, the sun demonstrated a gradual increase in intensity, but starting around 1970 or so, the intensity of solar output has gradually decreased (a trend that you can see in this NASA graph of sunspot number during Solar Cycles 22-24). That means long-term solar trends favored a slight warming of the earth from the early 1900s up until about 1970, but have favored a slight cooling of the earth overall since then.

Earth's orbit around the sun varies from nearly a perfect circle (left) to more elliptical (right) in a cycle that lasts about 100,000 years.
Credit: NASA GFSC

Furthermore, Earth's tilt on its axis isn't perfectly constant. Right now it's about 23.5 degrees, as you learned in a previous lesson, but over the course of about 40,000 years, it varies between 22.1 degrees and 24.5 degrees (credit: NASA GSFC). Earth also wobbles a bit as it spins on its axis, similar to a spinning top (for a visual, check out this video of a spinning top starting at about 10 seconds in). This "precession" (credit: NASA GSFC) occurs in a cycle that completes itself approximately every 26,000 years.

As you know, Earth's tilt on its axis is the reason for the seasons, so precession and changes to its tilt can dramatically change the seasonality (contrasts between winter and summer) on Earth. But, over really long time-scales, orbital changes can also impact Earth's average temperature and are connected to past ice ages (ice coverage tends to grow during periods when Earth's orbital characteristics favor long, cold winters and short, relatively cool summers). The key is to remember that these changes are really slow: they occur over tens of thousands of years. So, their impact on climate changes of the past century or so are largely negligible.

Earth's vast oceans aren't static, either. Large ocean currents speed up and slow down over time, and various portions of the oceans have their own warming and cooling cycles. We'll learn about one of these cycles that you may have heard about, which involves El Niño and La Niña, coming up in a later lesson. Because the oceans exchange moisture and energy with the atmosphere, these ocean cycles can affect the atmosphere, too. What happens in the ocean doesn't stay in the ocean!

But, it's important to note that ocean cycles don't add or subtract energy from the earth-atmosphere system overall; they simply redistribute energy within the system itself. In other words, when ocean cycles result in a net transfer of energy into the atmosphere (causing atmospheric warming), the oceans themselves lose energy. The opposite is true, too. When ocean cycles result in a net transfer of energy from the atmosphere into the ocean, the atmosphere loses energy and cools. The end result is that these cycles cause opposite impacts in the atmosphere and ocean. When one gains energy and warms, the other loses energy and cools overall. These cycles can result in atmospheric warming or cooling (usually a few tenths of a degree Celsius or less) that tends to last from months to a few years at a time, although a few ocean cycles last longer (generally several decades). Over the long term (the span of a century or more), these cycles don't really change global atmospheric temperature much because they result in shorter-term warming and cooling that over time tend to cancel each other out.

Volcanoes and related geologic activity can impact global temperatures in a couple of ways. First, very powerful volcanic eruptions spew ash, dust, and sulfur particles all the way up in to the stratosphere, where they can linger for months (or longer) and drift around the entire globe. Furthermore, sulfur gases can react with water vapor in the stratosphere to form a haze of sulfuric acid droplets that spreads around the globe at high altitudes. The byproducts of these volcanic emissions block out some incoming solar radiation, which works to temporarily cool the troposphere for a period of up to a few years. To see what I mean, check out the composite changes in surface temperature in the years after five major volcanic eruptions (Krakatau in 1883, Santa Maria in 1902, Agung in 1963, El Chichon in 1982, and Pinatubo in 1991).

Composite global surface temperature changes in the wake of five major volcanic eruptions (Krakatau in 1883, Santa Maria in 1902, Agung in 1963, El Chichon in 1982, and Pinatubo in 1991). Note that major eruptions lead to a global cooling (starting at time = 0 years along the bottom axis) of a fraction of a degree Celsius that lasts a few years.
Credit: NASA GISS

The global temperature drop after the Mount Pinatubo eruption in 1991 was about 0.6 degrees Celsius, and lasted for about two years, for example. But, such cooling is temporary. On the other hand, volcanic eruptions also emit greenhouse gases like carbon dioxide and methane, which you learned about previously. These gases actively absorb and emit infrared radiation, contributing to the so called "greenhouse effect," which warms the earth. These gases also can seep out of the earth in geologically active areas, too (even when volcanoes aren't erupting). But, these geologic sources add only a tiny amount of greenhouse gases to the atmosphere (much less than, say, the burning of fossil fuels), so over the course of the past century, while individual volcanic eruptions have caused temporary dips in global temperature, the net impacts of geologic activity on global temperature have been minor.

So, over the course of the past century, factors like volcanoes / geologic activity and ocean cycles have been responsible for short-term spikes and dips in global temperature lasting a few months to a few years, but little change over longer periods of time. Orbital changes are so slow to occur that their impacts are largely negligible over the course of a single century. Changes in solar output contributed to some warming up until around 1970, but have favored cooling since then. The combined effects of these natural drivers of climate change would likely lead to a slight warming until about 1970, followed by a slight cooling thereafter (ignoring shorter-term spikes and dips). But, that's not what has actually happened -- Earth has continued warming in recent decades. Why? We haven't yet covered other climate-change drivers, namely the ones driven by human activities. We'll do that next. Read on.