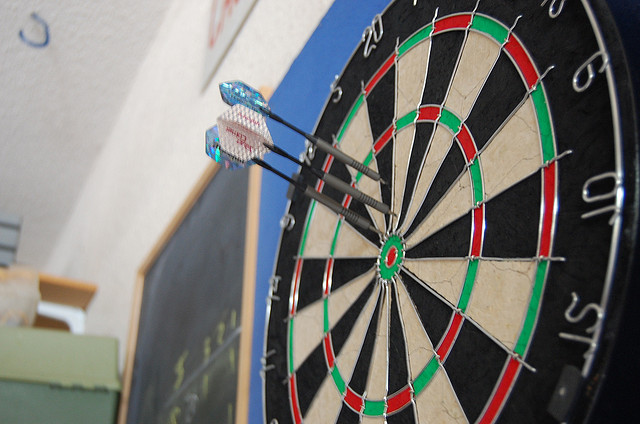 Contrary to popular belief, throwing darts has nothing to do with forecasting or measuring forecast accuracy.
Credit: Dartboard / CC BY 2.0

Perhaps you've heard the old saying that, "weather forecasters are the only people who can be wrong half the time and still get paid."  By the way, exactly zero meteorologists find this joke funny or original; we've all heard it thousands of times. I've also overheard plenty of conversations that go something like this, "They said it was going to rain today, but it didn't rain at all. They are always wrong!" Ouch! Meteorologists "don't get no respect" in some circles, much like Rodney Dangerfield.

But how true are these statements? Most folks just don't realize how much complex science is involved in making good forecasts (although I hope after finishing this course, you have a basic idea). Throwing darts or flipping coins won't cut it, despite what some say! In reality, weather forecasts have never been better, and every day, individuals and organizations rely on reasonably accurate weather forecasts to make life- and money-saving decisions, not to mention decisions to maximize personal comfort (whether or not to wear a coat, take an umbrella, etc.).

So, why do weather forecasters have such a bad rap in some circles? Well, let's start with the obvious. Despite the improvements in weather forecasts over the years, they aren't perfect, and they can be very wrong on occasion (although it really doesn't happen very often). But, it's more complicated than that. In the example I used above, who are "they" in "They said it was going to rain today?" Where did this person actually get their weather forecast? Was it from a mobile weather app? A weather forecaster on television? Social media? Was the forecast even made by a professional meteorologist? Did the forecast say it would definitely rain, or was the forecast misinterpreted?

Today, people consume weather information and forecasts from so many sources -- the National Weather Service (in the United States), local television stations, social media, and various private weather companies that produce forecasts for radio stations, newspapers, websites, and mobile weather apps, just to name a few. In this way, we are all "weather consumers," and your sources really matter when it comes to finding quality forecasts and other weather information. You see, not all forecasts are created equal; the weather forecast on your mobile app may have been created very differently than a forecast communicated on television by a meteorologist, for example. The age of social media has further complicated matters because of how fast information spreads. It's sometimes not easy to tell whether a particular person or organization on social media truly has expertise and experience in meteorology, and weather "hype" can spread quickly when people share information that is incorrect or not communicated clearly.