With the arrival of the Internet, and social media in particular, the landscape has changed. With these tools, you can access weather forecasts, information, and insights from meteorologists all around the world. Social media allows you to follow the forecast thoughts and insights of thousands of meteorologists worldwide, and even perhaps interact with them. That's a huge difference from the old days, and it has pros and cons. One positive is that people have access to more weather information and expertise than ever before. But, a negative is that not all of the information is high quality and not all of the "expertise" is real. Furthermore, it's sometimes hard to tell the difference on social media between a real expert and fake one if you're not somewhat weather savvy yourself, so I hope that the basic weather knowledge you've accumulated in this course along with the discussion in this section will help you better navigate the weather information that's available on social media.

It's Only a Matter of Time

Why is that a problem? Well, if you're under a tornado warning, and a meteorologist shares that via social media, you might see that post right away...or you might not. Social media platforms can have complex algorithms that decide what content to deliver to you, based on what they "think" you want to see. The end result is that sometimes the content that you see first might be old (sometimes days old). If you're under a tornado warning and have minutes to spare before a tornado hits your area, seeing the tornado warning shared into your social media feed a couple of days later is not helpful (if you're still alive, that is). The bottom line is that you should have multiple ways to get urgent severe weather warnings (weather apps, television, radio, NOAA Weather Radio, etc.), and you should not rely on social media for potentially life-saving weather information.

Along the same lines, because social media platforms do not always deliver the most recent content to you, make sure that you take time to look for the timestamp on a post (most platforms include the time and the date somewhere on the post). For example, Penn State's Weather World television program posted information on its Facebook page about a line of damaging thunderstorms moving through western Pennsylvania on the evening of August 29, 2018. But, inevitably, some people didn't see this post in their feeds until hours, or even a few days later. 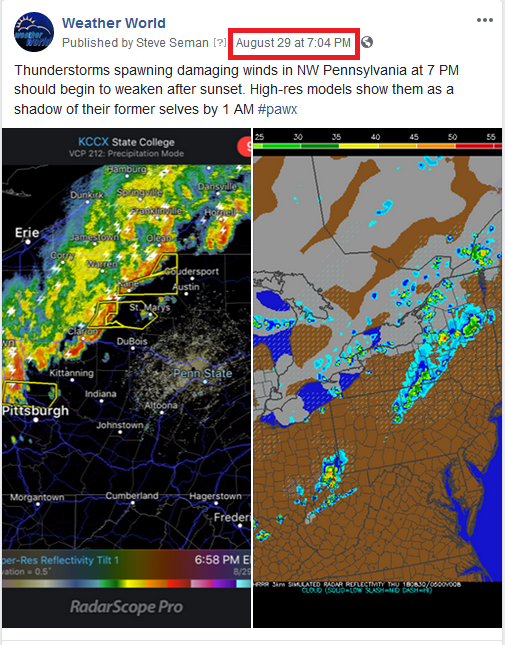 Before sharing weather-related social media posts, make sure to check the timestamp on the post so that you know whether the post is current and relevant.
Credit: Weather World via Facebook

Sometimes Not Sharing is Caring

When a major weather event is on the way, social media platforms get filled with a wide variety of forecasts and analyses, and not all of the forecasts and analyses are legitimate. For example, in 2017, the National Weather Service Twitter account had to remind people to keep an eye out for "fake forecasts," and remind the public their official forecasts for hurricanes only go five days into the future (because of the great uncertainty in hurricane track forecasting beyond that point).

What prompted such a reminder? Viral fake forecasts like the one below, which showed a forecast for Irma that took the storm into the Gulf of Mexico and striking Texas a week later. This particular forecast was shared nearly 37,000 times on Facebook (meaning it was likely seen by hundreds of thousands, if not millions of people) and incited some regional panic in part because southeastern Texas had just been deluged by Hurricane Harvey just a couple of weeks before. Irma ended up making landfall in southwest Florida, and no "real" forecast ever had it making landfall in Texas. Both local news sources and national news sources ran stories warning the public that this forecast was fake. 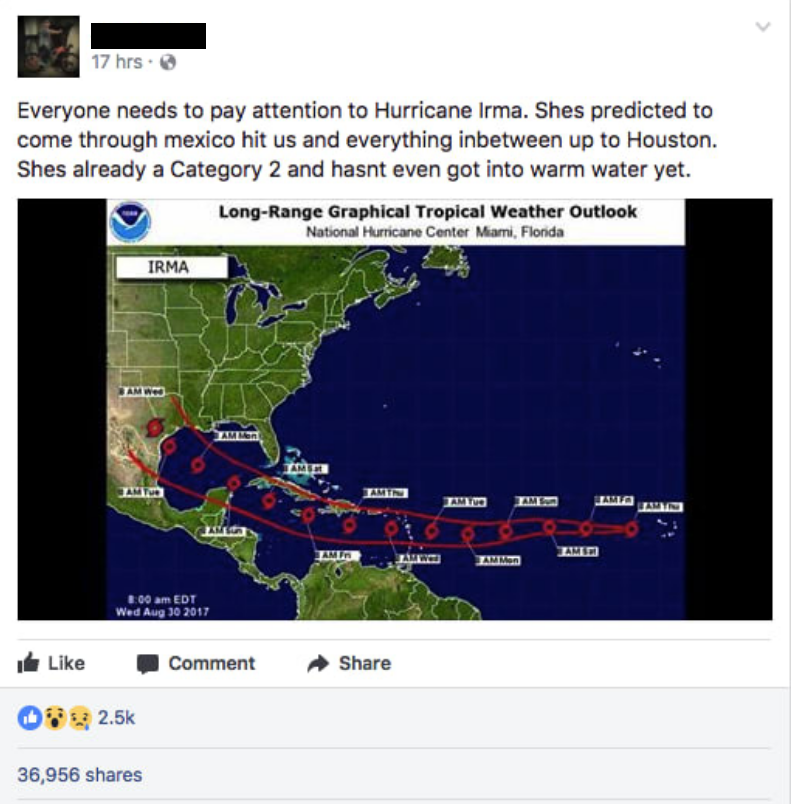 Viral fake weather forecasts aren't just limited to hurricanes, though. Fake snowfall forecasts go viral from time-to-time, too. Take this example of a Facebook post from September 13, 2018 by the "New England News Network," which said that the Northeast will have its first September snowfall "in years," and was accompanied by a very official-looking snowfall forecast graphic showing up to six inches of snow in parts of the Northeast.

This post was shared 20,000 times on Facebook, and it was a complete fabrication. The snowfall forecast graphic looked official and professional because it was a real graphic from a private weather company (AccuWeather), but it was for a snowfall forecast from a previous winter. While a bout of cool weather was on tap this particular weekend in the Northeast, there was absolutely no chance of snow, and red flags would have gone up for anyone with some weather savvy. How many times on record do you think that, say, parts of Pennsylvania and New Jersey have received three or more inches of snow in September (right around the end of astronomical summer / beginning of astronomical fall)? If you said "zero," you're absolutely right. And, there was no chance of it here.

Anyone who took the time to read the "New England News Network" page description would have seen that it described itself as a satire site. So, they posted this forecast as a joke, but many people share social media posts without checking their sources, and judging from the 20,000 shares and accompanying comments indicating that people thought it was a real forecast (or at least thought it might be real), and you have a recipe for confusion. This scenario plays out often enough that some professional meteorologists at television stations, private weather companies, and the National Weather Service have to spend an increasing amount of time vetting and debunking forecasts that are spreading panic on social media (often because of overly specific forecasts a week or more into the future). Some meteorologists refer to this as the "Social Media-rologist Dilemma" because the sources of these forecasts are often (although not always) not professional meteorologists, and they may not have sufficient education in meteorology or weather forecasting; yet, their social media posts can have far-ranging impacts.

The bottom line here is that you need to evaluate the weather forecasts you see on social media, which requires some critical thinking. Does the forecast make sense? Is the forecast trying to predict something that meteorologists actually have skill at predicting, or is it an overly specific forecast for something several days or a week or more into the future? If something doesn't seem right about it, based on the principles you've learned in this course, perhaps it's not worth sharing. Sometimes not sharing is caring. Of course, knowing a little bit about the sources of the weather information you see can help with vetting its quality, too. 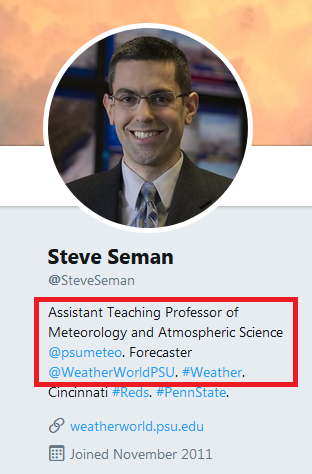 Because just about anyone can have a social media account and post weather forecasts and information if they want to, it's up to you, the weather consumer, to determine which sources of weather information are reliable and trustworthy. A good first step is to take a moment to read the social media profile of the person or organization that posted the weather information you're seeing. Many professional meteorologists will put job titles and professional affiliations in their social media profiles. Furthermore, it never hurts to do a Google (or other web) search to find out information about your source. Most television meteorologists have bios on their station websites, and many other professional meteorologists and weather companies have websites where you can find information about their background and experience. As you read up on their backgrounds, here are some questions to think about:

If you've found a weather source that does these three things, then congratulations! You've likely found a trustworthy and reliable source of weather information! If you see a particular source that frequently posts incorrect information or forecasts that regularly go wrong, or they post a lot of overly specific long-range forecasts or long-range model guidance (like 15-day model snowfall forecasts, for example) without explaining the uncertainties involved, they may not be a reliable source.

To get you started in finding trusted weather sources on social media, Forbes published a list of Twitter accounts that provide quality weather information (this list obviously is not entirely inclusive). Many of these people and organizations have a presence on other social media platforms, so you may find them on other platforms, too. I hope that by completing this course, you're now in a better position to use your weather knowledge to navigate through the sea of weather information available and differentiate quality information and forecasts from hype and junk. Good luck!