A 2015 analysis by fivethrityeight.com indicated that 80 percent of those surveyed check the weather forecast daily, and most probably have their favorite "go to" place to get a weather forecast (favorite television station, website, app, etc.). Their analysis suggested that the most commonly used sources for weather forecasts were a combination of mobile apps and websites, with these "online" sources having a slight edge over television. But, preferred sources for forecasts depend somewhat on the type of forecast needed. For example, a 2017 report by the Center of Risk and Crisis Management at the University of Oklahoma (you're welcome to explore the report more if you're interested) indicated that when it comes to learning about current tornado warnings, for example, television was by far the most common source (about 65 percent), followed by notifications on mobile devices. 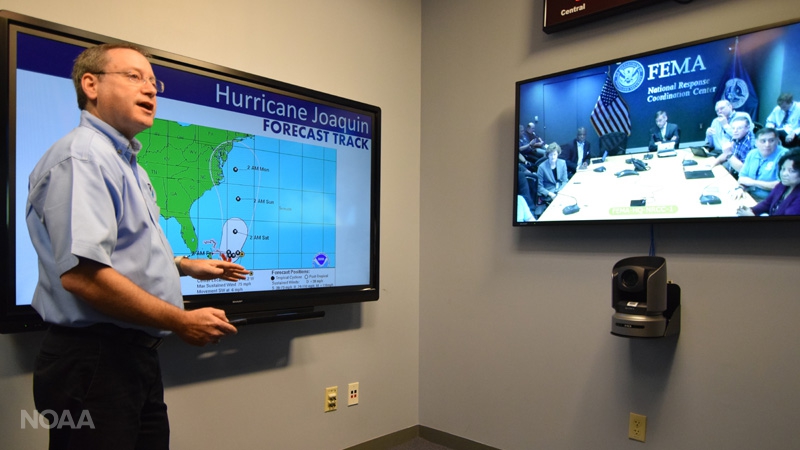 A forecaster from the National Weather Service briefs officials from the Federal Emergency Management Agency (FEMA) about the track of Hurricane Joaquin in 2015.
Credit: NOAA

But, all weather forecasts are not created equal, and it's a good idea to know how the forecasts that come from your favorite sources are made, if possible. In the United States, the National Weather Service and other forecasting centers run by the federal government (such as the National Hurricane Center, the Storm Prediction Center, and the Weather Prediction Center) provide taxpayer-funded service to every community in the nation (if you're looking for solid, no-hype weather information, these sites can be good places to start). The overarching mission of these agencies is to "provide weather, water, and climate data, forecasts and warnings for the protection of life and property and enhancement of the national economy."

Instead, most people get their routine daily weather forecasts from private-sector sources, ranging from television broadcasters (most of whom are creating their own forecasts) to private weather companies who distribute forecasts through traditional media outlets, online, and through weather apps. The way that these forecasts are created varies widely, and accordingly, their quality varies, too.

Weather Forecasts: The Humans vs. The Machines

Forecast verification data indicate that having human forecasters involved in the forecast process tends to increase accuracy, on average, compared to forecasts that are purely automated. As just one example, here's the percentage improvement compared to raw computer model forecasts for Weather Prediction Center one-day forecasts for at least one inch of precipitation  While the exact percentage improvement has varied from year to year since the early 1990s, it's fair to say that the human forecasters at the Weather Prediction Center demonstrate 20 to 40 percent improvement over raw computer model forecasts most of the time.

Pretty much all forecasts involve computer models in some way, but human forecasters at the National Weather Service evaluate observations, interpret computer model forecasts, use ensembles, and apply their knowledge of atmospheric processes and past weather patterns to improve upon the computer model forecasts. A similar process occurs at most major private weather companies: Humans work together to synthesize the observations and computer model forecasts to create their own forecast, which gets entered into a computerized global forecast database, and in many cases gets sent to media clients (radio stations, newspapers, etc.), along with their website and mobile app. So, depending on what weather app you use, the forecast you see may have had human forecasters involved somewhere in the process (this is often the case if the app comes from a major private weather company or a local television station).

But, that's not true of some weather apps. Indeed, some offer purely automated forecasts straight from a computer model, interpolated to your location. Or, perhaps, at best, they're using a blend of several computer models or ensembles to come up with a forecast. The forecast accuracy of these apps tends to not be quite as good as those with forecasts that have involved humans in the process. I'm not trying to say that completely automated forecasts are always poor (they're not), but they can be more susceptible to large errors. The old phrase "garbage in, garbage out" comes to mind. In other words, when the computer starts with a significant initialization error (garbage in) its forecast is going to have large errors (garbage out). Human forecasters can help minimize these errors, but when they're not involved in the process, the end forecast can occasionally be garbage.

However, regardless of whether or not a human is involved in the forecast process that gets a forecast into your mobile app, many weather apps suffer from the fact that they give a lot of highly specific information -- exact temperatures and precipitation amounts seven or more days into the future, or even hourly weather forecasts out several days or more into the future (these aspects of the forecast typically don't involve direct human intervention). Based on what you learned previously about how forecast errors grow, it's not surprising that a forecast for rain starting at exactly 1 p.m. several days from now, for example, isn't likely to be correct. 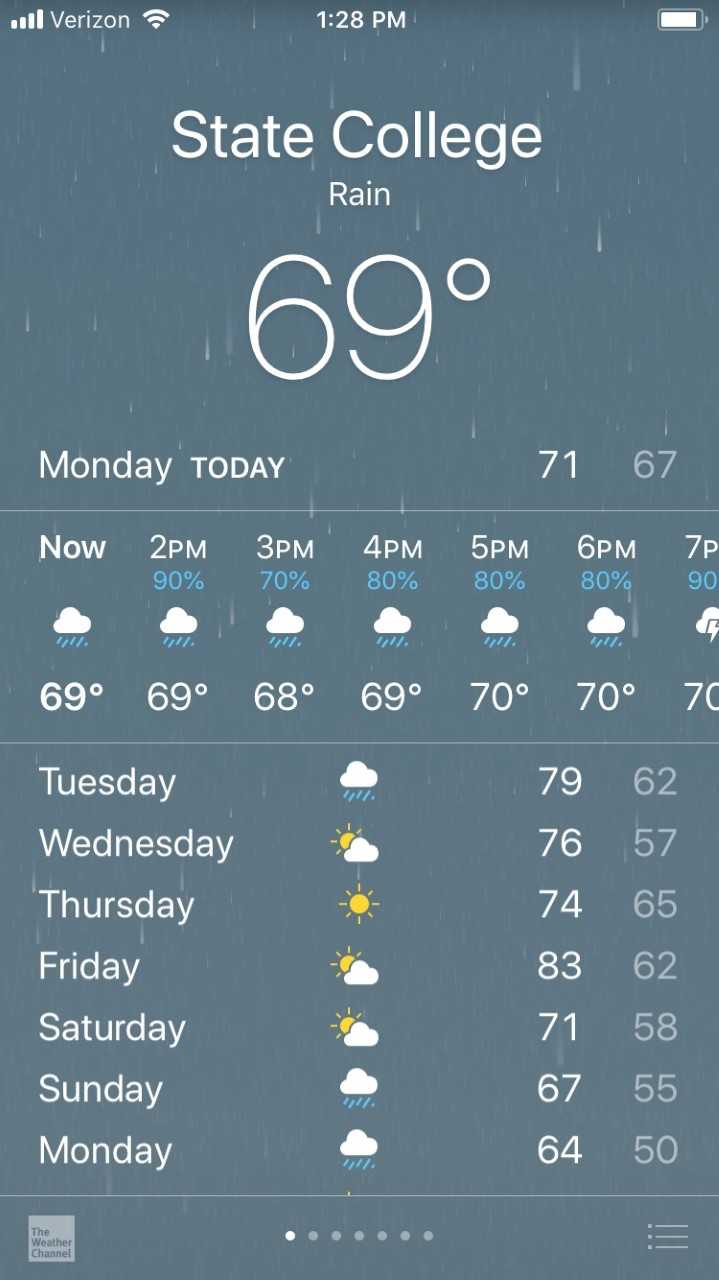 Weather apps often give highly specific forecasts out to seven days or longer, regardless of forecast uncertainties and the overall skill of such forecasts. This particular screenshot is of the iPhone default weather app in 2018.
Credit: Steve Seman

Some weather apps even offer weather forecasts down to the minute for a few hours into the future ("heavy rain beginning in 38 minutes," for example). These ultra-specific, minute-by-minute forecasts tend to be purely automated (humans can't update their forecast every single minute), but can be useful sometimes in at least approximating the arrival time of precipitation. But, be aware that due to their completely automated nature, they can occasionally be subject to very large errors. As a personal example, I recall seeing a minute-by-minute forecast a few years back that called for "heavy snow starting in 15 minutes." I was shocked because I knew it wouldn't snow in 15 minutes. So, what happened? After 15 minutes, there was no snow (while the app kept insisting on it). Conditions remained dry for a few hours until precipitation began to fall, but it wasn't even snow; it was light rain! Oops! Garbage in, garbage out.

Furthermore, many apps (and websites, for that matter) describe each day's forecast with only a weather "icon," and perhaps a few words, at best. Take the example from the weather app shown on the right, and note the icon showing clouds and rain on Tuesday (the screenshot was taken the day before, on Monday). What does this icon mean? Is it going to rain all day? Most of the day? Will there just be a passing shower? It's not exactly clear, but to me, the icon implies that most of the day is going to be cloudy and rainy. The next day, on Tuesday, it did rain early in the morning in State College, but the rain ended before 9 a.m., and by midday, it was a beautiful, dry day (I snapped this photo on campus). Most of the day was dry, so the forecast icon certainly didn't do justice to the weather that day!

From the icon alone, it would be easy to think that forecasters missed badly on Tuesday's forecast, but in reality, the National Weather Service called it right. Their forecast called for some morning rain, with "improving conditions" and "brightening skies" in the afternoon. On television, forecasters often use simple forecast icons on their graphics, too (similar to what you see in the app above on the right), but the forecaster can explain and give additional context to the forecast. In this case, forecasters on television were able to explain that rain would be confined to the morning.

So, where you get your forecast from matters, and you have many options! In our society, the burden of finding quality sources of weather forecasts and communication falls on the weather consumer, and in some high-profile cases, people and organizations have made poor choices about where they get their weather information. Just ask the Miami Marlins, who embarrasingly once had a rain delay in their stadium with a retractable roof, all because their decision makers decided to keep the roof open after "playing meteorologist" using only mobile apps! If you're getting your forecast from television, the National Weather Service, or some major private weather companies, there's a good chance your forecast had a human involved in the process. But, especially when it comes to weather websites and apps, it's not always easy to tell whether or not human forecasters were involved. So, even if you're not sure exactly where your forecast is coming from, keep these thoughts in mind: