When Weather Made History

When you've finished this section, you should be able to discuss the primary challenges faced by weather forecasters in the pre-satellite era, as well as be able to define analog forecasting and discuss its current uses in meteorology.

Planning for the Allied invasion of France actually began two years earlier, and as you can imagine, the planning for the initial landing (more than 150,000 troops) on the beaches of Normandy in northern France was a massive undertaking. Military planners knew that a successful invasion was weather dependent, and the requirements were complex. For example, naval forces needed to avoid strong winds and rough seas, which could capsize small landing boats and cause larger ships to drift from their assigned positions. Visibility needed to be at least 3 miles so that gunners on ships could see their targets. The air forces included high-altitude bombers, which preferred little or no cloud cover, while low-altitude bombers preferred clouds near 3,000 feet, so that they could zoom up into the clouds and be obscured from view after they dropped their bombs. But, very low clouds and fog were problematic for the air forces because bombers wouldn't be able to see their targets (and neither would troops landing from the air). The requirements of the Allied armies were less stringent, but they preferred not to have heavy rain, which would impede the movement of tanks and other large vehicles.

General Dwight Eisenhower, supreme commander of the Allied Forces in Europe, also wanted a full moon (to make landing targets and obstacles easier to see) and low tide (to expose the underwater defenses of the German forces) for the pre-dawn invasion. The combination of a nearly full moon and low tide was available on June 5, 6, or 7, 1944. If those days didn't work, the next time when low tides would be timely was June 19 and 20. Knowing ahead of time that one of those days would have favorable weather conditions with today's technology is one thing. But, doing so in an era with no satellite data, no computer models, and relatively few surface observations is quite another. Yet, that's what forecasters set out to do. 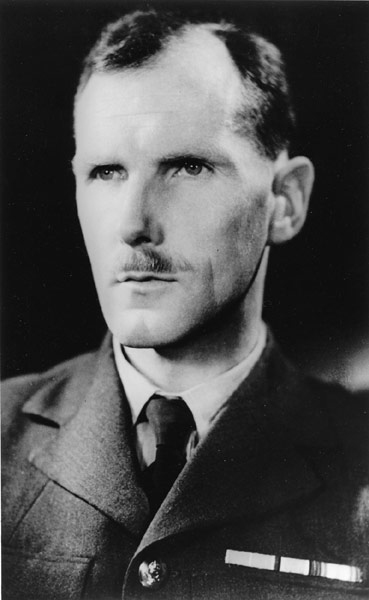 The Allies had a few teams of meteorologists working on the forecast, but, the top meteorological advisor to General Eisenhower was Group Captain James Stagg of the British Royal Air Force. The teams of meteorologists were attempting to make five-day forecasts (a huge feat then) in preparation for the attack, although the forecasters advised military commanders that they had much less confidence in their forecasts beyond one or two days. To have any chance at a successful forecast, the meteorologists needed weather observations. As you know, weather systems in the middle latitudes tend to move from west to east, and with the vast North Atlantic Ocean located to the west of the European continent, there weren't many weather observations "upstream" from Europe. Therefore, the Allies flew weather reconnaissance missions over the North Atlantic and stationed ships to take weather observations in the oceans to help fill in the wide gaps in weather observations that existed. The Axis powers did the same, because they, too, recognized the importance of these observations to creating reasonably accurate weather forecasts for successful operations.

The Allies were even able to intercept the weather reports from German U-boats since they had cracked the Germans' code, and with all of the weather observations they could muster (still relatively few by today's standards), meteorologists were able to analyze weather maps to find centers of high and low pressure, warm fronts, cold fronts, etc. The team of American meteorologists relied heavily on their analysis of these observations to create analog forecasts. The theory of analog forecasts boils down to the idea that the behavior of the atmosphere tends to repeat itself over time. Therefore, if you can compare historical weather patterns to current conditions, you can create a successful forecast. Analog forecasting can be a useful technique, and it's actually still used today, primarily in making general, long-range forecasts (more than a week into the future). But, analog forecasting isn't great for making a detailed, short-term forecast.

Two British teams of meteorologists used a different technique for their forecasts. They used the weather observations and the developing body of knowledge about how mid-latitude cyclones work (which we covered the basics of previously) to try to predict the evolution of the atmosphere. With multiple teams of meteorologists working on the forecast, limited observational data, and different forecasting methods, the forecasters had many disagreements.

Initially, the attack was planned for June 5, the first day with the full moon and low-tide conditions that Eisenhower desired, and the American meteorologists believed that the weather on June 5 would be fine. The teams of British meteorologists were less enthusiastic about the weather on June 5. The weather in late May and early June leading up to the planned attack had largely been ideal, but the British meteorologists suspected that was about to change based on their analysis. After much debate and argument, the teams of meteorologists reached a consensus, and on June 4, Group Captain James Stagg advised General Eisenhower to delay the planned attack for June 5 because it would be too windy, with low overcast clouds. The expected conditions would make it impossible for paratroopers to land on their marks, and would prevent gunners and bombers from seeing and hitting their targets.

It was a good call. The weather on June 5 was too harsh for a successful attack. But, what about the next day? Again, there was some disagreement. The American team of forecasters believed that a break in the weather would allow the Allies to launch the attack. One of the British teams agreed that the weather on June 6 would improve enough to launch the attack, but the other British team disagreed. They thought that while weather conditions would improve a bit, conditions still would be too harsh.

After intense deliberations, Group Captain Stagg advised General Eisenhower that the forecasters thought the weather would improve on June 6, and while wind speeds may occasionally flirt with the upper-bound of acceptable speeds, the sky should be mostly clear, with perhaps some clouds later in the day. The weather conditions weren't going to be ideal, but they should be good enough, and with that, the operation was a "go."

In the wee hours of June 6, winds occasionally exceeded the maximum threshold set by the naval forces, which led to some soldiers getting seasick as thier boats were tossed by the rough waves, but on the morning of June 6, 1944, the largest seaborne invasion in world history commenced. Some small ships wrecked in the rough seas. Planes dropping paratroopers also encountered some unexpected areas of low clouds, which caused a number of the paratroopers to land well off target. But the wind and waves were manageable for most ships and soldiers, and most were able to land, even though the weather conditions weren't ideal. Conditions were just good enough, and by the end of the day, the Allies controlled five beachheads. 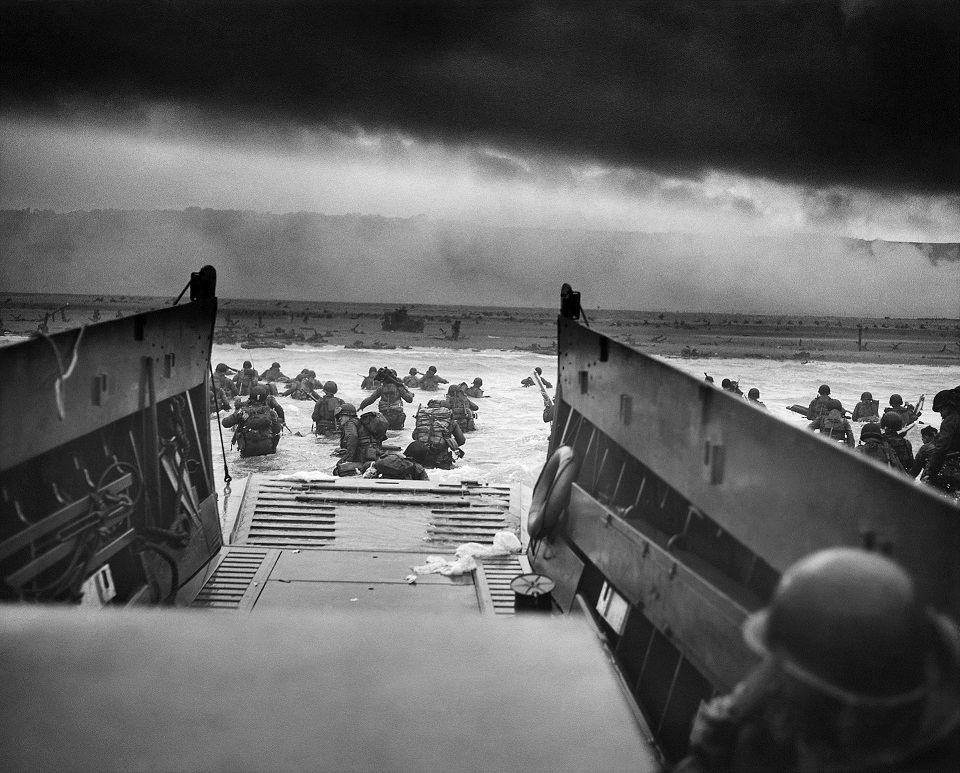 On the morning of June 6, 1944, the weather was just good enough to pull off the largest seaborne invasion in world history.
Credit: U.S. National Archives

The attack was successful in part because its timing surprised the German forces. German meteorologists also had determined that conditions on June 5 were unsuitable for an attack, and they may have noted that the weather would improve somewhat on June 6, but the Germans didn't think the Allied forces would be able to pull off the attack even with marginally improved weather. They thought conditions would still be a bit too unsettled for Allied boats and planes. In fact, the Germans believed that an attack would be impossible for weeks because of poor weather conditions, and a number of senior German officers were away on training exercises when the attack occurred. German General Edwin Rommel, in charge of the defense of Normandy, was at home in Berlin celebrating his wife's birthday when the attack began.

It's not that the Allies made a better weather forecast than the German forces, but they were willing to launch the attack in conditions that the Germans didn't anticipate. Group Captain Stagg and the teams of Allied meteorologists ultimately gave General Eisenhower useful, actionable information, and given the overall lack of data they had to work with (compared to what we have today), I think it's pretty amazing that they basically got it right (even though the forecast wasn't perfect). Attacking on June 5 would have been a disaster, but the weather on June 6 was just good enough to pull off the attack. And, for what it's worth, the weather during the second available window later in June (June 19-20) ended up being even worse. So, the Allies ended up taking advantage of the only acceptable attack window during June, and the rest is history.

Of course, a lot has changed since then. The advent of satellite imagery really changed the weather forecasting game, as did the invention of computer forecast models, which form the basis of the forecasts you see today. Up next, we'll talk a bit about just what "computer models" are and how they work. Read on!