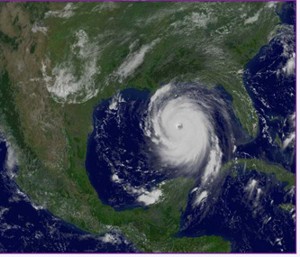 The names of hurricanes that populate the top of the list of costliest U.S. weather disasters may be familiar to you -- Katrina (2005), Harvey (2017), Maria (2017), and Sandy (2012) are just a handful of headline-making, devastating storms that have impacted the United States in recent years. But, hurricanes don't just impact the United States. These storms, which go by other names around the globe like "typhoon" or "severe cyclonic storm," roam several ocean basins and threaten countries around the world. In fact, the deadliest tropical cyclone on record occurred in 1970 in Bangladesh. This "Great Bhola Cyclone" killed somewhere between 300,000 and 500,000 people.

There's no doubting the dangers and immense power of hurricanes and other strong tropical cyclones. Although very strong winds often take top headlines when a hurricane approaches land, a hurricane's most dangerous weapon is water, in the form of flooding along coasts and inland from heavy rain. Thanks to modern technology, and the ability to record and broadcast video with just a cell phone, dramatic footage from hurricane landfalls has flooded the Internet in recent years. The ferocity that the core of a hurricane can bring is on full display in this video of Super Typhoon Haiyan (2013) making landfall in the Philippines and this video of Hurricane Katrina (2005) making landfall in Gulfport, Mississippi (this video, in particular, shows the dangers from water). And, yes, if you watched the videos, "hurricane chasing" is a real thing that a handful of (possibly crazy) people do. It's certainly not something I recommend!

Meteorologists work hard to give the public as much advance notice as possible about the dangers that hurricanes may bring, and have greatly improved the quality of hurricane forecasts in recent decades (although there's still room for improvement). As a prime example, at 10:11 A.M. on August 28, 2005 (24 hours before Hurricane Katrina made landfall), the National Weather Service (NWS) office in New Orleans issued this chilling public bulletin which describes in graphic detail the conditions that would likely occur as the storm came ashore. This bulletin marked a watershed moment in NWS history in that no public bulletin had ever been so explicit in describing the danger faced by those choosing not to evacuate. In hindsight, it was an ominous foreshadowing of what was to come. Unfortunately for those who didn't or couldn't evacuate ahead of time, by the time the storm rolled in, it was too late.

In this lesson, we're going to learn all about tropical cyclones, including the basics of tropical cyclone climatology, naming conventions, the ingredients needed for a tropical cyclone to form and strengthen, the vertical structure of a mature hurricane, and hazards associated with tropical cyclone landfalls. There's a lot of action-packed material to cover, so let's get started!