‹ Lesson 10: The Human Impact on Weather and Climate Natural Drivers of Climate Change ›

When you finish this section, you should be able to discuss the impacts of urbanization and deforestation on temperature, precipitation, albedo, and local hydrology (local evaporation, drainage and flooding issues in cities, etc.).

The infrared satellite image from 1745Z on March 27, 2001 reveals that the urban environments of Minnesota are warmer than the surrounding landscape.
Credit: NASA

Perhaps you're skeptical that human activities can alter weather and climate. After all, the concept of global climate change is complex and may not be obvious to an individual on a daily basis. So, let's start local with some ways that humans alter their local environments. For starters, take a look at the infrared satellite image on the right from 1745Z on March 27, 2001. Since this is a conventional infrared satellite image, we're looking at temperature as determined by emitted infrared radiation, and since there were no clouds over Minnesota at this time, you're seeing the temperature of the surface of the earth (darker areas are warmer). Note the relatively large dark splotch in eastern Minnesota, along with a number of other tiny dark "dots" scattered about the landscape. Any ideas about what they are?

These local warm spots aren't random. They're cities, the largest of which is the Minneapolis / St. Paul metropolitan area. Smaller cities, like St. Cloud, Rochester, and Mankato are also evident. Essentially, you're seeing the results of the urban-heat island effect that you learned about previously. Recall that on a sunny day with light winds, temperatures in any big city can be several degrees higher than surrounding rural areas, as paved surfaces and buildings readily absorb solar radiation due to their relatively low albedos. Moreover, heat from cars, industry and other human activities accents the warmer city environment. Meanwhile, over the surrounding countryside, higher albedos typical of vegetation, along with evaporation of water released from trees and plants (which "sweat" in a process called "transpiration") serve to help to keep the daytime rural environment cooler than its urban counterpart.

Though noticeable differences between urban and rural temperatures exist during the day, the effect of the urban-heat island stands out more dramatically at night, particularly on clear, calm winter nights that follow sunny days. This is because sunshine warms the city more than surrounding rural areas, so city temperatures are already higher than rural temperatures as the sun starts to set. The temperature gap between the warmer city and the cooler countryside widens throughout the night as concrete and buildings, which absorbed plenty of solar radiation by day, slowly and steadily conduct, convect, and radiate energy to other parts of the urban environment. So, urbanized landscapes tend to be warmer than surrounding suburban and rural landscapes both during the day and at night.

(Left): Visible satellite image from 1745Z on March 27, 2001 shows that urbanized areas such as Minneapolis / St. Paul lacked snow cover and have a much lower albedo than the surrounding countryside. The corresponding infrared image on the right demonstrates the fact that the urban areas were warmer than their surroundings.
Credit: NASA

The bottom line is that these satellite images appear the way they do because of alterations to the local environment by humans. They're a clear demonstration of a local impact that human activity can have on weather and climate. But, localized warmth and lower albedo aren't the only changes that occur amongst the concrete jungles of cities. Several research studies indicate that rainfall tends to be enhanced downwind of a major metropolitan area, especially during summer when winds are relatively weak. This set-up paves the way for urban heat islands to act as local "hot spots," which promote instability and rising currents of air. In a nutshell, buoyant air over the urban environment begins to rise and form tall cumulus clouds, which eventually develop into showers and thunderstorms as they drift downwind from the city.

One of the first and most comprehensive attempts to measure an urban area's effect on precipitation was METROMEX, the METROpolitan Meteorological EXperiment, which was a multi-year research project that began in 1971 at St. Louis, Missouri. The results of METROMEX indicated that average summertime rainfall and the frequency of thunderstorms and hail increased as much as 25% in a broad area around St. Louis, which extended 40 miles east of the city. Less extensive studies around the Chicago and Washington, D.C., metropolitan areas produced similar results. For a visual of the impact that cities can have on convection, check out the image of lightning flash density (number of strikes per square kilometer per year) around Houston, Texas from 1989-2001 (below). 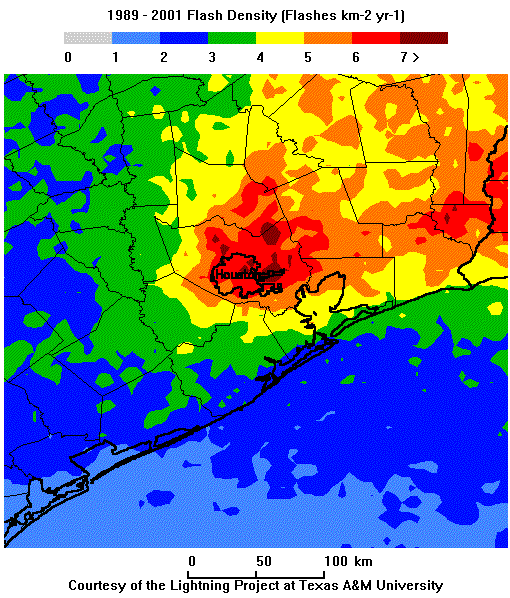 The distribution of cloud-to-ground lightning strikes in the vicinity of Houston, Texas, from 1989 to 2001. The metropolitan area of Houston is outlined in black near the center of the image. For the record, flash density refers to the average annual number of strikes per square kilometer. Note that the maximum flash density occurs downwind (east) of the city.
Credit: The Lightning Project, Texas A&M University

But, changes from urbanization aren't limited to temperature and precipitation. Changes in the landscape also affect what happens to precipitation after it falls. By removing vegetation and soil, and replacing it with largely impervious paved surfaces and drainage networks, more water runs off directly into rivers and streams instead of being partially absorbed by soil and plants. The increase in runoff means that urban streams tend to rise more quickly and are more prone to flooding than rural streams during episodes of heavy rain. So, changes in land use and development can be important factors for local weather and climate! Even if land is not urbanized, however, land use changes can still have important impacts. Let's look at the impacts of one more important land use change -- deforestation.

Deforestation refers to the destruction of forests to make land available for other uses like agriculture, pastures, or urban development, and it has a wide variety of global and local impacts. Here, I'm going to focus on the local impacts on temperature and the hydrologic cycle. For starters, the trees and other plant life in forests tend to hoard water and limit local warming because some of the sun's energy is used to evaporate water in the forested environment. On the other hand, in deforested areas, more water directly runs off into streams and rivers, which leaves less water to evaporate from the ground. With less moisture to evaporate, more of the sun's energy can work to warm the surface, which in turn warms the air above.

This effect is especially profound in cases where tropical rain forests are destroyed. NASA scientists estimate that clearing a rain forest to bare ground can increase local temperatures by as much as 3 degrees Fahrenheit, which translates to a huge impact on local climate. Furthermore, these forests in equatorial regions are very humid and rainy, and thus, they transfer a lot of water back to the atmosphere through evaporation and transpiration. The abundance of water vapor in the atmosphere, in turn, favors the formation of additional clouds and precipitation. As an extreme case, in the Amazon Basin, estimates suggest that trees help generate about half of the rain that falls there! So, destroying rain forests can significantly reduce the amount of rain that falls locally.

In addition to the impacts on moisture that I just described, deforestation also increases the albedo of the earth's surface, which in turn decreases the amount of solar energy absorbed by the surface and ultimately transferred into the lower troposphere. The difference in albedo between forested areas and non-forested areas is evident on visible satellite imagery on a perfectly clear day, as you can see in this example from 18Z on October 2, 2017 (note that the northern forests and forested mountains of Pennsylvania appear darker than the agricultural valley regions). The difference in albedo between forested and non-forested areas is even more stark during winter when there's snow on the ground, as the visible satellite image from around 1730Z on January 18, 2018 (below) shows. 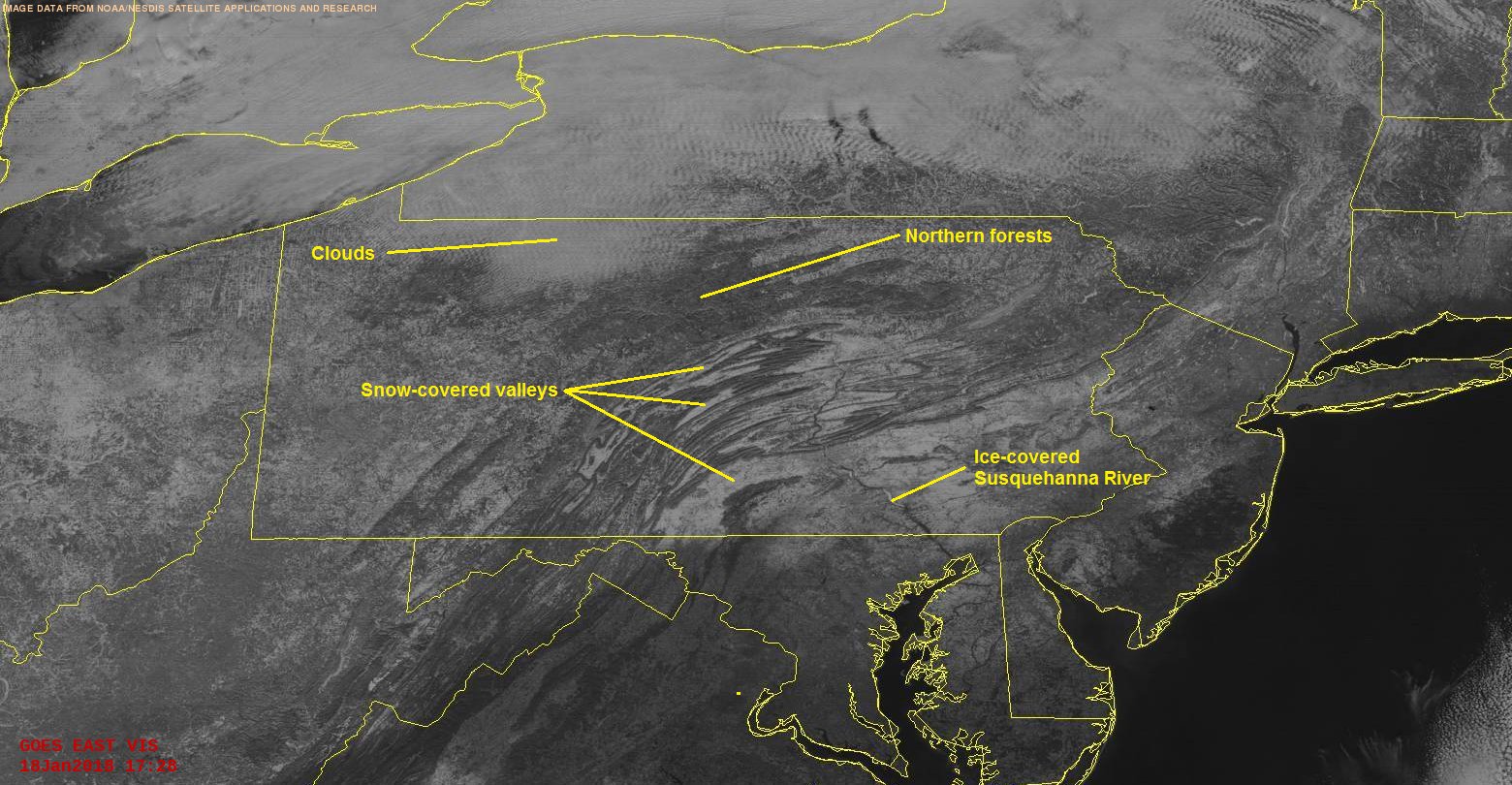 The visible satellite image from around 1730Z on January 18, 2018 shows the contrast between the low albedo of forested regions compared to snow-covered, agricultural valley regions. For a closer look, here's the full-sized image.
Credit: Penn State University / NOAA - NESDIS

In most areas, estimates suggest that deforestation actually causes a slight cooling because the decrease in absorbed solar radiation caused by increased albedo slightly outweighs the impacts of local drying (more of the sun's power being used for warming instead of evaporation). Tropical rain forests, of course, appear to be an exception because changes to the local hydrologic cycle from deforestation are so huge (a major reduction in evaporation) that warming tends to win out.

So, there's no doubt that changing forests into fields or cities affects the exchange of energy and water between the surface and the atmosphere, which alters local climates. And, I haven't even really touched on the consequences for local ecosystems and biodiversity. The tremendous variety of species of plants and animals in rain forests is unmatched in North America. Many plants that grow in rain forests contain substances that are used to develop prescription medications, so destruction of these forests has far-reaching effects that go well beyond local weather and climate.

Remember that the weather and climate impacts of land-use changes that I discussed in this section are ultimately local (I didn't address their larger-scale impacts). But, what about the bigger picture? Can human activity affect weather and climate on a global scale? We'll begin addressing that issue up next, and to do so, we first must briefly discuss naturally-occurring factors that can alter global climate. Read on.