Unfortunately, this question often gets posed as "did climate change cause a particular heatwave / flood / drought / storm?" Asked in this way, the answer is "no." Global warming or other aspects of climate change, by themselves, do not cause weather events. Extreme weather events like blistering heatwaves, powerful thunderstorms, raging floods, and devastating tornadoes and hurricanes all occurred before human activities started influencing the climate on a global scale. So, climate change, by itself, doesn't cause, say, a heatwave here or a flood there. The real issues are to what extent extreme weather events are impacted by the warming of the planet (in terms of changes in intensity, frequency, impacts, common area of occurrence, etc.), or whether a certain extreme weather event was made more or less likely because of global warming.

These are complex topics, and it should come as no surprise that research relating extreme weather and climate change is very active. One thing that has become clear, however, is that changes in extreme weather have varied in differing regions of the globe. If that seems confusing, remember that while the world is warming, not all areas are warming equally, and while global sea levels are rising, they're not rising everywhere due to local effects. So, it's likely that all types of climate change (natural and anthropogenic) on the local, regional, and global scale all affect changing patterns of extreme weather in some way. Still, some basic physical relationships dictate that the human-induced warming of the oceans and atmosphere has resulted in some changes to atmospheric behavior.

Let's start with a couple of the more straightforward connections between global warming and extreme weather events. For starters, as the world has warmed, average temperatures in many areas have increased. Not surprisingly, so have outbreaks of hot weather. On a similar note, episodes of extremely cold weather have declined, which seems intuitive.

The above graph shows the probability of occurrence of "cold," near "average," and "hot" weather, and shows a shift in the temperature distribution as the climate warms. Temperatures near average are still the most common, but the average itself has shifted a bit warmer. In addition, the entire temperature distribution shifts a bit warmer, meaning that outbreaks of extremely cold weather become fewer and outbreaks of extremely hot weather become more common. Note that this doesn't mean cold outbreaks will cease as the world warms. Indeed, very cold weather can still occur. Take February 2015 as an example, when the eastern United States was extremely cold, and a couple of areas actually had their coldest February on record (since 1895). So, yes, the weather can still sometimes be frigid even amid global warming. But, added up over time, fewer cold outbreaks and more heatwaves occur. I should also point out that the increase in hot weather has been most notable at night (more record warm nights) than during the day. The same goes for the reduction in extreme cold; the decrease in very cold nights has been more notable than decreased extreme cold during the day.

One way that meteorologists assess the amount of moisture available for precipitation is with a variable called "precipitable water," which is the amount of rain that would fall if all of the water vapor in a column of air from the surface of the earth to the top of the troposphere (approximately) fell as rain. The image below shows the simulated percent change in precipitable water between the 1984-2013 average and the 1871-1900 average. The prevalence of blue shadings across the globe shows that in most areas precipitable water has increased by a few percent to upwards of 15 percent as the world has warmed. 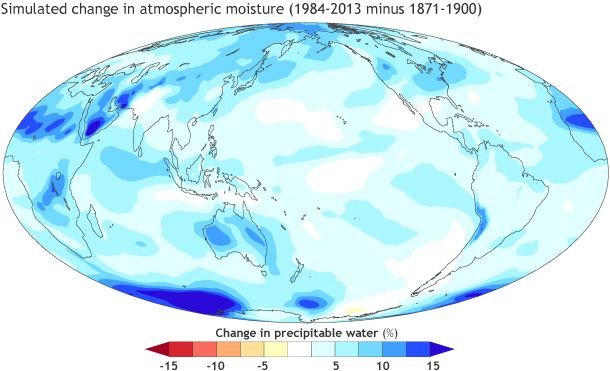 The difference in the 1984-2013 average of atmospheric precipitable water and the 1871-1900 average shows that most areas of the globe have had an increase in precipitable water ranging from a few percent to 15 percent or more.
Credit: NOAA

Therefore, it's not surprising to see an increase in heavy rain events, too. For example, the percentage of the contiguous United States receiving an unusually large portion of total annual rainfall from extreme one-day rainfall events has increased (here's the corresponding graph from NOAA; the orange curve represents a running nine-year average). But, the increase in heavy rain events hasn't occurred equally everywhere. Breaking the United States down into regions (credit: National Climate Assessment, 2014) reveals that from 1958 through 2012, the largest increase in rainfall from heavy rain events (defined here as the top one percent of all rainfalls for each region) has been in the Northeast. The smallest increase has been in the Southwest, while Hawaii actually showed a small decrease in the amount of rain falling in the heaviest events during the period.

Changes in precipitation patterns (both in amounts and frequency) have also impacted drought frequency and severity (for the record, a drought is a prolonged period with very little rainfall and subsequent water shortages). Some areas have experienced more intense and longer droughts (such as in parts of Europe), while in other areas, droughts have actually become shorter and less intense (over parts of North America). There is, however, some concern that as the world continues to warm, increased evaporation from soils may worsen droughts, particularly in areas that see little or no increase in rainfall.

While changes in extreme heat / extreme cold episodes and precipitation extremes have varied somewhat across the globe, scientists are pretty confident that global warming is playing a significant role in these trends. Determining the role of global warming gets more complicated with smaller-scale and / or shorter-lived storms, like hurricanes (tropical cyclones), mid-latitude low-pressure systems (extratropical cyclones), and severe thunderstorms (convective storms). The image below will give you an idea of what links between global warming and extreme weather trends are more certain (those farther toward the upper right of the graph) and which are less certain (those toward the bottom left of the graph). Note also that the graph includes "extreme rainfall," but not "flooding." It turns out that trends in flooding are highly dependent on local factors. Remember that urbanization changes the way that water is absorbed into the ground, and how quickly it drains into nearby streams and rivers. Therefore, poor urban planning can result in increased flooding regardless of changes in patterns of heavy rainfall. So, local land-use changes play a huge role in flooding trends, and they aren't always directly tied to trends in extreme rainfall related to global warming. 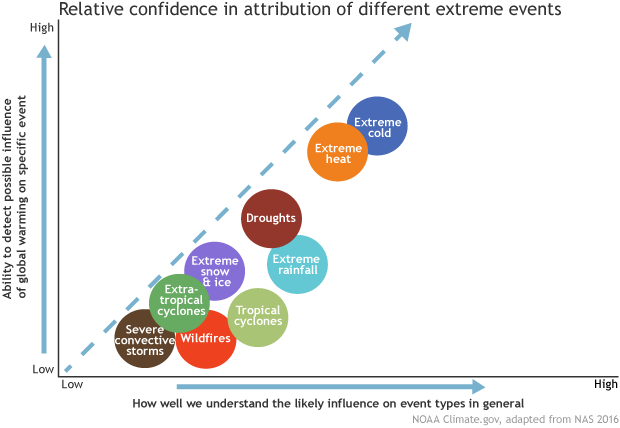 Scientists are most confident in linking changes in episodes of extreme heat and extreme cold to global warming, followed by droughts and extreme rainfall. Confidence in attributing changes to smaller, shorter-lived atmospheric phenomena like tropical cyclones (such as hurricanes), extratropical cyclones (mid-latitude low-pressure systems), and severe convective storms (thunderstorms) is lower.
Credit: National Academy of Sciences

While there's great interest in potential links between global warming and destructive storms like hurricanes and severe thunderstorms or tornadoes, note that there's less certainty in these links. I'll focus on tornadoes and tropical cyclones (such as hurricanes) since they get a lot of attention. One unfortunate cause of the uncertainty regarding global warming and these weather features is that we only have a short period of quality observations. For example, the number of strong and violent tornadoes each year hasn't changed much since 1950 in the United States, but the number of weak tornadoes has increased dramatically (credit: Ian Livingston / ustornadoes.com). Is that because of global warming? Probably not. Our ability to detect storms that may produce tornadoes greatly improved with the implementation of NEXRAD Doppler radars in the early 1990s, so at least some of this increase can be attributed the fact that we're better at detecting tornadoes than we used to be (fewer of them get missed).

It's a similar story with tropical cyclones. The top of the list of costliest weather disasters in the U.S from 1980 through 2017 (credit: NCEI) is dominated by hurricanes, and there's little doubt that the societal impacts of tropical cyclones have increased. But, is it because human-induced warming is causing more and / or stronger tropical cyclones? Again, the lack of a long record of quality observations complicates the answer to this question, and makes it difficult to confirm the exact role of global warming. Before the era of global satellite coverage began in the 1970s, some storms were inevitably missed (those that didn't make landfall or weren't encountered by any ships traversing the oceans). When accounting for this idea, the data suggest that the number of tropical cyclones around the globe has changed very little as the world has warmed, but a larger percentage of hurricanes that form are becoming very strong (maximum sustained winds more than 110 miles per hour). Even with that signal, the increase in damage from tropical cyclone landfalls appears to be more closely driven by increased population and development near coastlines (more infrastructure for a storm to damage or destroy when it makes landfall) than human-induced warming (so far, at least). 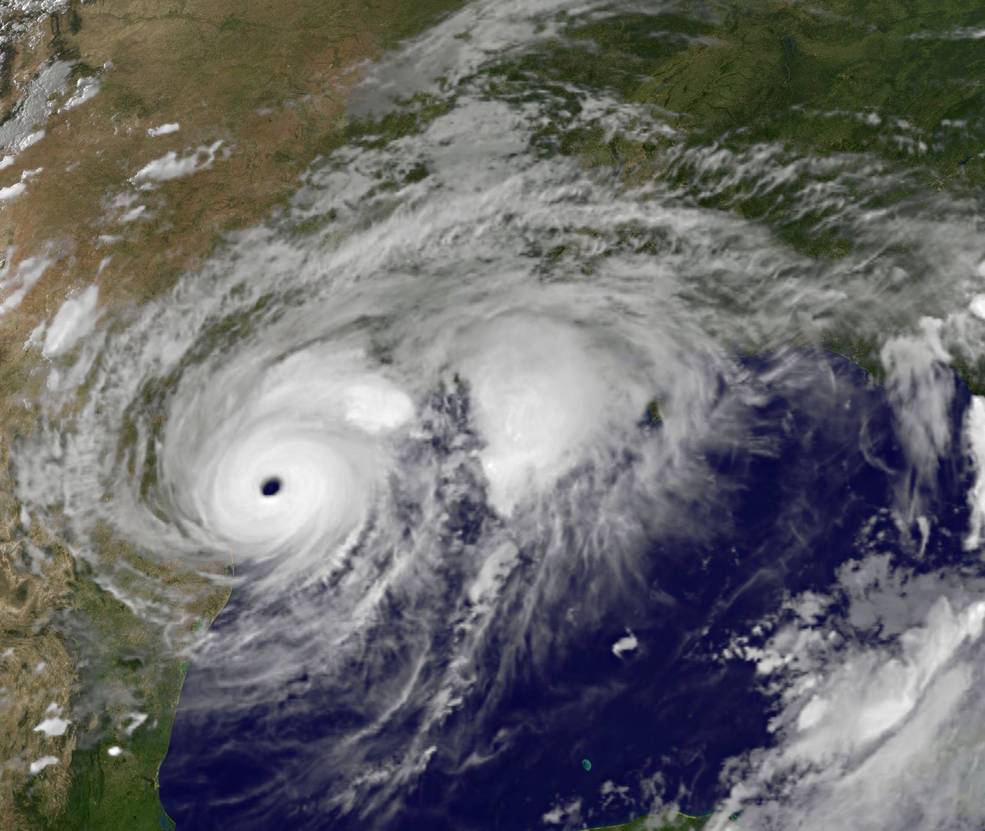 Hurricane Harvey near landfall in southeast Texas. Harvey's slow motion once inland led to a deluge of rain and catastrophic flooding.
Credit: NASA

Tropical cyclones are also prolific rain-makers, and Hurricane Harvey (2017) is an extreme example (40-60 inches of rain fell in parts of Texas, causing catastrophic flooding). But, how much of Harvey's rain was "natural" and how much was caused by global warming? That's a tough question to answer! Harvey's immense rain totals in southeast Texas were largely caused by the fact that the storm moved so slowly. While we can't blame global warming specifically for Harvey's slow motion, some studies have shown a 10 percent decrease (on average) in the forward speed of tropical cyclones since 1949. The research in this area has shown some conflicting results, but slower-moving storms have the potential to dump more rain over a given area. Scientists also perform attribution studies using computer models to simulate the storm in a world without global warming for comparison. While such attribution simulations have uncertainties, the simulations for Harvey suggest that global warming made its deluge more likely and increased the intensity of the rainfall by anywhere from about 10 percent to near 40 percent.

Linking climate change to extreme weather events is a complex topic, and we've just scratched the surface! Keep in mind that global warming does not cause individual weather events, but it can make them more or less likely to occur, and can potentially change their intensity and impacts. Some connections between human-induced warming and extreme weather are more clear-cut than others, but being unsure about specific connections isn't the same as saying that there's no link at all. In cases where scientists are unsure, it may be that the connections are rather insignificant, or it may be that we just don't yet have a sufficiently long set of records to show a significant connection. Important research into better understanding the connections between global warming and extreme weather is ongoing, and while some of that research is focused on analyzing how our climate has changed, some is focused on how it will change in the future. Just how do scientists make projections about future climate characteristics, and even trends in various types of extreme weather? We'll explore that in the next section.