Upon completion of this section, you should be able to define multicell and supercell thunderstorms, and contrast their features and characteristics of their environments with those of single-cell thunderstorms.

When vertical wind shear is weak, typically the winds blowing relative to a thunderstorm's movement in the lower troposphere are too weak to "restrain" the dense cold pool, allowing the gust front to race away from the storm and ultimately leading to the storm's quick demise. But, as vertical wind shear increases in the atmosphere, conditions become more favorable for thunderstorms to take on different structures and last longer (assuming, of course, that parcels get nudged upward and are positively buoyant in the first place). As vertical wind shear increases, thunderstorms often become "multicells" or "supercells." Let's explore the characteristics of these storm types. 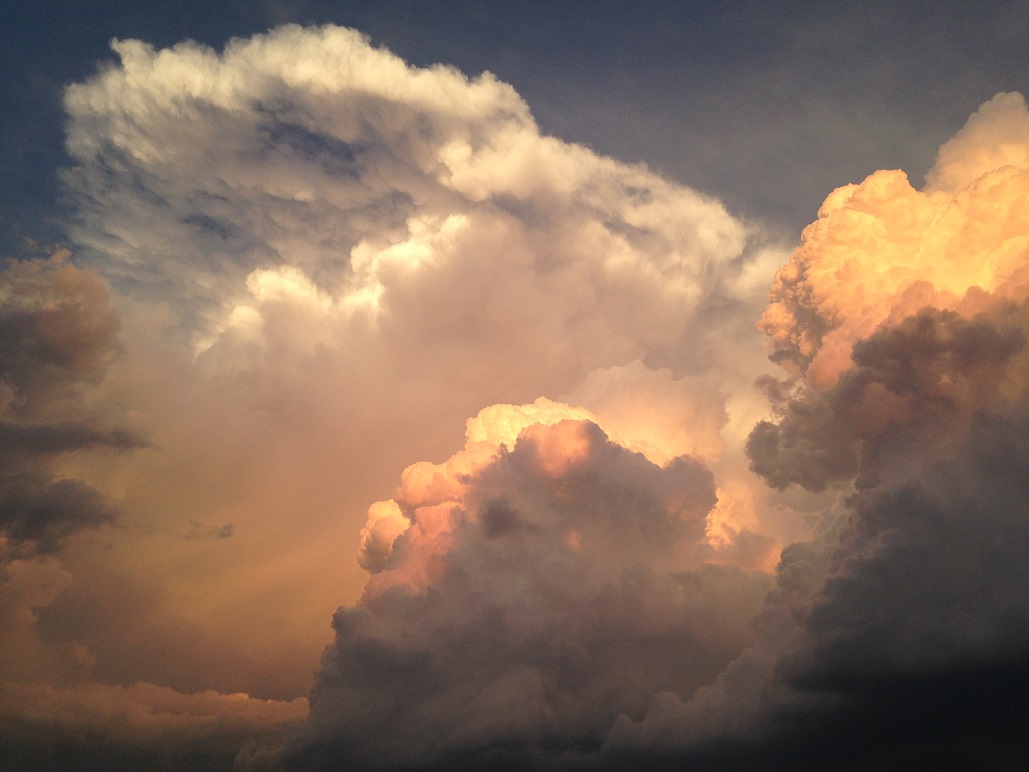 Multicell thunderstorms at sunset near Duck, North Carolina on June 12, 2016. Note the cumulus clouds in various stages of development (the tallest white cloud extending to the top-left of the image is the underside of an anvil).
Credit: Steve Seman

The real atmosphere sometimes doesn't look as nice and tidy as the idealized schematics I showed in the video, but the bottom line is that, in contrast to single-cell convection, the gust front associated with a multicell thunderstorm repeatedly initiates new cells (often on the storm's southwestern flank). The corresponding cumulus towers associated with new updrafts are separate from their neighbors, and along the gust front, the newest cumulus tower forms the farthest from the oldest cell (which is likely in the dissipating stage of its life cycle). Thus, within a multicell thunderstorm, there is a hierarchy of convective cells at various stages in their life cycles, and a given cumulus tower is taller and farther along in its life cycle than the newer cell immediately adjacent to it. The result is often a "stair-step" appearance along the multicell storm's "flanking line," which is an organized zone of cumulus and towering cumulus clouds extending outward from the mature updraft of multicell storms.

The key to sustaining multicell thunderstorms is the "restrained" gust front initiating new storms, which requires stronger low-level wind flow relative to the movement of the storms compared to what occurs when single-cell thunderstorms form. This stronger inflow goes along with an increase in vertical wind shear, which is what weather forecasters look for to help them try to determine what type(s) of thunderstorms might form. With stronger low-level winds blowing toward the gust front, the dense, rain-cooled outflow encounters more resistance, and cannot advance as far away from the downdraft's splashdown point as in the case of single-cell storms. The end result is that the multicell thunderstorm does not lose access to warm, moist air, setting the stage for convergence along gust fronts to initiate new convection and confirming the idea that multicell storms are self-perpetuating.

To better visualize this self-perpetuating nature of multicellular convection, check out this top-down view of radar reflectivity associated with a classic multicell thunderstorm. Note how the low-level, storm-relative flow "attacks" the gust front head on, maximizing lift and thereby paving the way for the repeated initiation of new convective clouds along the flanking line. Of course, as the cold pool continues to expand with the initiation of new storms, it eventually undercuts the updrafts of older cells, which, in turn, dissipate.

As I just discussed, when vertical wind shear in the atmosphere is moderately strong, multicells tend to form. What about when relatively isolated thunderstorms form in an environment with even stronger vertical wind shear? Allow me to introduce supercell thunderstorms. Supercells are defined by a single rotating updraft that persists for a relatively long period of time. The longevity of supercells is probably one of the traits that earned them the prefix, "super." Indeed, most supercells last for one to four hours, although under certain conditions, they can last longer than that. On radar, discrete supercells sometimes (not always) have a very distinctive appearance (displaying a hook echo).

Supercells can be visually stunning (see photograph below), and when it comes to producing dangerous, destructive weather, supercells are a big deal! As a general rule, nearly all supercells produce large hail or damaging winds. Furthermore, supercells are responsible for nearly all of the strongest tornadoes (rapidly rotating columns of air in contact with the ground that can cause immense damage) and the largest hail (at least two inches in diameter). Beyond tornadoes, large hail, and damaging winds, I also point out that supercells spark frequent lightning, with rates often exceeding 200 flashes per minute, some of the highest rates ever observed. So, there are plenty of good reasons why so many weather enthusiasts find supercells to be alluring. 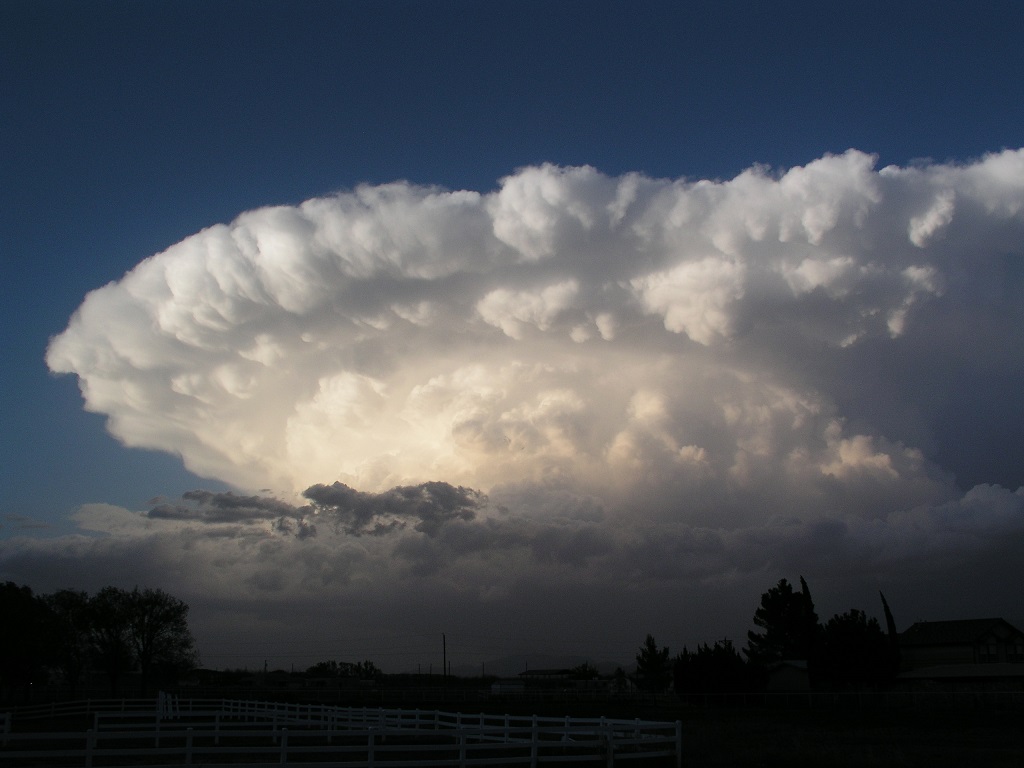 Supercell thunderstorms can be visually stunning, and are characterized by their persistent, rotating updraft.
Credit: Greg Lundeen / National Weather Service

Before the installation of Doppler radar on a national scale in the late 1980s and early 1990s, meteorologists believed that supercells were rare storms. But, with Doppler radar's ability to detect wind velocities, it became clear that more storms than originally thought have rotating updrafts. So, supercells aren't really rare, but they are certainly a minority of all thunderstorms. Supercells are much more common in some parts of the United States than others (supercells are more common in the Great Plains than they are in Northeast, for example).

The key to the formation of supercells (assuming, of course, that air parcels get a bit of an upward nudge and they can become positively buoyant), is strong vertical wind shear. The changes in wind direction and / or speed with increasing height do two main things that increase a supercell's longevity. First, they assure that the storm's updraft and downdraft remain separate as fast winds aloft carry raindrops, ice crystals, hail, etc., out of the updraft. Secondly, the vertical wind shear's interaction with the storm's updraft helps reduce pressure aloft in the storm, which locally boosts the vertical pressure gradient. The details of how this works are very complex and beyond the scope of the course, but the bottom line is that a stronger vertical pressure gradient boosts the strength of the updraft and helps maintain it.

The low pressure aloft that coincides with the supercell's updraft is called a mesocyclone, which is the defining characteristic of a supercell (its rotating updraft). Mesocyclones are a few to perhaps 10 kilometers (on order of several miles) wide, and at least half as tall as the depth of the cumulonimbus cloud. As you can tell from the idealized radar reflectivity of a supercell below, the storm's updraft (where the mesocyclone is labeled) is separated from the downdrafts in the storm (where reflectivity is higher and precipitation is falling). On the southwestern flank of the storm, radar echoes appear to wrap around the mesocyclone, forming the "hook echo" that I mentioned earlier (although not all supercells display a discernible hook echo on radar). 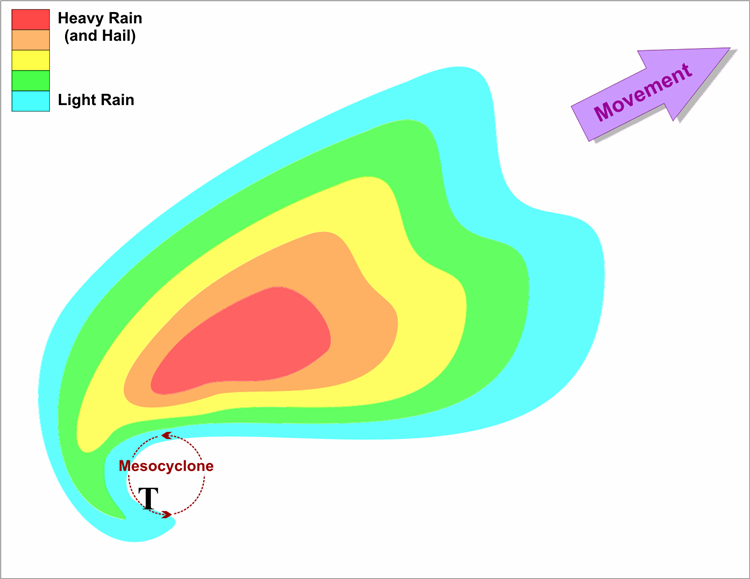 The idealized radar reflectivity of a tornadic supercell. Note that the tornado ("T") forms near the hook echo in concert with the cyclonic circulation associated with the mesocyclone. Keep in mind that most supercells do not spawn tornadoes.
Credit: David Babb

If a supercell spawns a tornado, it would form near the point marked "T" on the idealized radar reflectivity above, but keep in mind that most supercells don't actually spawn tornadoes. I should point out that supercells have gust fronts (and sometimes flanking lines), too, but new thunderstorms typically don't form along them because air tends to sink around the periphery of the supercell.

We'll talk more about supercells in the next lesson as we focus our discussion more on severe weather (since supercells can be such prolific severe weather producers). However, before we focus on severe weather, I want to wrap up the lesson by talking about wintertime convection. While thunderstorms are obviously much more common in the warmer months because of the availability of warm, moist air to make air parcels positively buoyant, convection sometimes occurs in the wintertime, too. The impacts can be quite dramatic, and they don't always involve lightning and thunder. Read on!