What Causes the Wind?

The first step in analyzing the wind direction and speed at a given location is to identify all of the forces that play a part in moving the air. So, let's start with the most basic question: what force causes the air to move horizontally in the first place? In other words, what causes the wind to blow? As you might have guessed, since we've been discussing atmospheric pressure, the reason that air moves horizontally is related to pressure. Specifically, differences in pressure across the globe result in a force, called the "pressure gradient force" that sets air in motion. Let's explore. 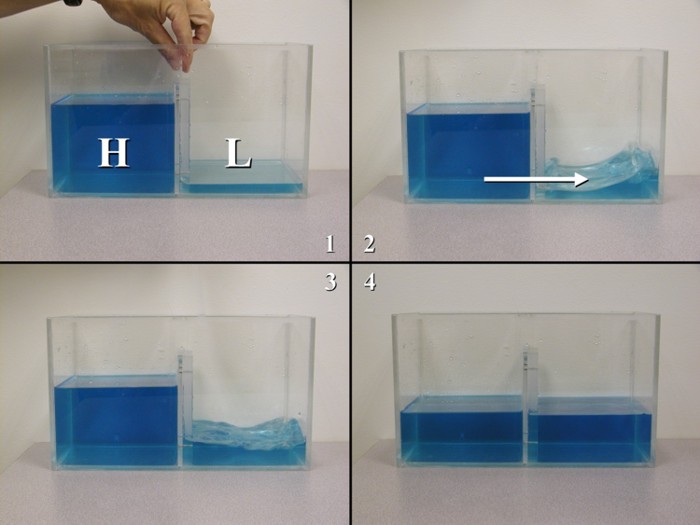 When the barrier is removed between the two water columns (frame 1) the water flows from the higher column to the lower column because of the pressure gradient force (arrow, frame 2). The result (frame 4) is two columns with equal heights and thus no pressure gradient.
Credit: David Babb

Isaac Newton's second law of motion states that when a net force is applied to an object, it accelerates; therefore, there must have been a net force acting on the water in order to set it into motion. In this case, the catalyst force was the pressure-gradient force, which acts from higher pressure toward lower pressure.

I should note that, mathematically, the values of most sea-level pressure gradients seem small. Even tight packings of isobars (equating to a "strong" pressure gradient force) ultimately amount to a change of a tiny fraction of a millibar per mile. Yet, when isobars are tightly packed, wicked winds can blow! For example, check out the seal-level pressure gradient around the extremely strong 944-mb low-pressure system over the Bering Sea on November 9, 2011 (see 06Z surface analysis below). The pressure-gradient force caused winds to really whip, as you can tell from this YouTube video from Nome, Alaska (winds gusted over 50 miles per hour for several hours). 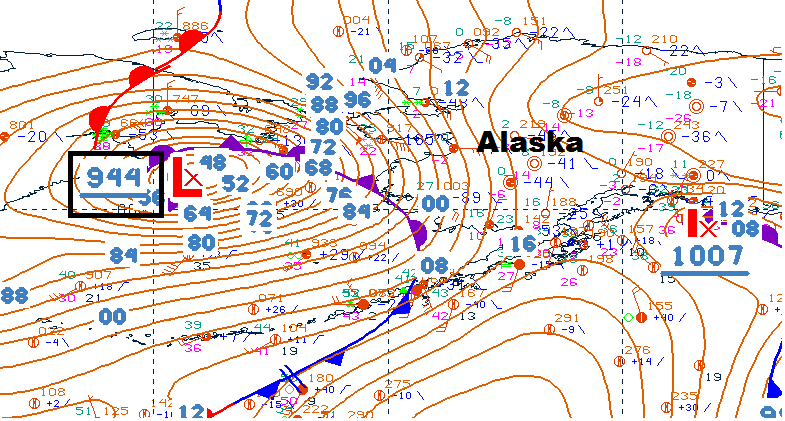 The 06Z surface analysis over the Bering Sea and Alaska on November 9, 2011. At the time, a deep low-pressure system, with a central pressure of 944 millibars, was generating very strong winds east of the low's center.
Credit: Ocean Prediction Center 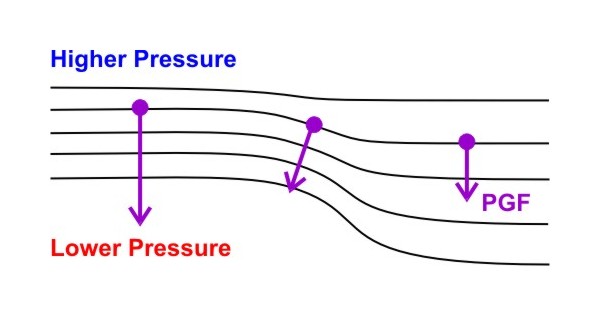 The pressure-gradient force (PGF) is a vector which points from higher pressure to lower pressure while crossing isobars at a right angle. Its magnitude depends on the pressure gradient, which is a measure of the spacing between isobars.
Credit: David Babb

So, when isobars are packed closer together, the wind should blow faster as the data from the intense low over the Bering Sea on November 9, 2011, indicate. The 12Z surface analysis from April 30, 2011 provides another good example. First, note the 40-knot sustained winds over eastern Montana and western North Dakota compared to the 10-15 knot sustained winds over eastern North Dakota (where the isobars are packed more loosely). You should also notice that the winds aren't blowing directly perpendicular to the isobars, from higher pressure to lower pressure. What's up with that?

The wind would blow directly from higher to lower pressure if the pressure-gradient force was the only force acting on the air, but that's not the case. We have to account for other forces as well when trying to assess wind direction and speed. We'll examine another one of those forces up next. Read on.