Controlling Traffic Around Highs and Lows

Recall from earlier in the lesson that surface air pressure can be closely approximated by the weight of an air column with a small fixed area that extends from the ground to the top of the atmosphere. Therefore, the center of a low-pressure system marks the air column that weighs less than any other column in the vicinity. But, our newfound understanding of how winds blow around low pressure at the surface (counterclockwise in the Northern Hemisphere, with winds crossing isobars in toward low pressure) presents a bit of a dilemma. If you look at the pattern of winds around Tropical Storm Lee at 18Z on September 8, 2011, you can see that air essentially spirals inward toward the center of the low.  This process of air "coming together" is called convergence.

Do you see the problem? As air spirals in toward the low's center, the mass of air columns near the center increases, thus making the weights of columns also increase. So, a surface low, by its own circulation, acts to increase pressure around its center, and thus ultimately causes its own demise. Seems sort of self-destructive, doesn't it?

Why would a low seemingly contribute to its own destruction? Think of the atmosphere as a place where there is a culture of "column peer pressure." In other words, there is a sort of atmospheric peer pressure at work that compels neighboring air columns to weigh about the same. How does this culture of column peer pressure work? Suppose there's an air column that's a bit of a lightweight (in other words, assume the air column lies over the center of a newly formed low-pressure system). The weight-conscious atmosphere immediately tries to add weight to this column by having surface air move toward this column. This general movement of air toward lower surface pressure is, very simply, the wind. 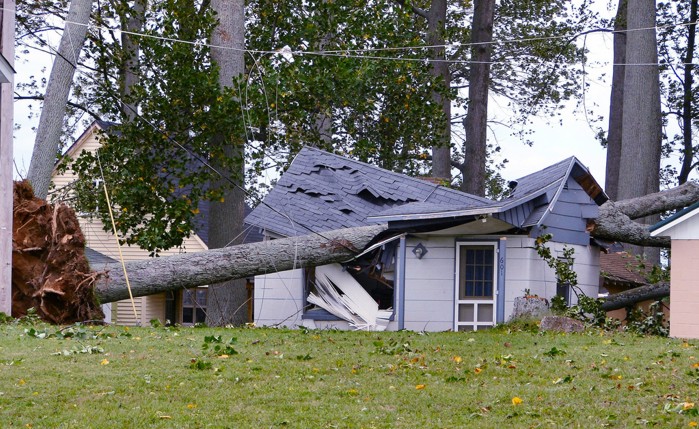 Sometimes, the strong winds associated with intense low-pressure systems can lead to unimaginable damage. The photograph above of destruction in the aftermath of Hurricane Ike strikingly proves my point. Ike was no longer a hurricane by the time it reached Indiana, but it was still a strong low-pressure system, and the effects of the accompanying winds were felt very far inland.

So how do centers of high and low pressure maintain themselves for any length of time? Let's focus our attention on a newly formed low. The traffic jam of air (congestion, convergence of air, etc.) around the center of the low, which surely adds weight to local air columns, would prevent surface pressures from decreasing any further if acting alone. But, after most lows form, they don't start to die immediately. Indeed, most low-pressure systems reach maturity, attaining a central pressure much lower than the values they started out with. and I think an analogy will help you understand the corrective measures that lows take to manage extra weight they take on from convergence near the surface. Imagine a dollop of whipped cream sitting on a table top. If you were to smash the dollop by clapping your hands together (simulating convergence), the whipped topping would squirt upward (it can't squirt downward because the solid table just won't let it).

Though not as violent or as messy, the convergence of surface air around the center of a low promotes rising air (air can't go down because the ground just won't let it). Currents of rising air often lead to clouds and sometimes precipitation. Of course, this doesn't really solve the low's weight problem. Air moving upward in the column is still in the column, and its weight will contribute to the surface pressure (if you raise your hands while standing on a scale, you certainly don't weigh less). NOTE: Rising air does NOT cause low pressure. If you go searching around on the Web, you may very well find explanations that say that rising air causes surface pressure to decrease (or that low-pressure systems strengthen because of rising air). Not true!

So how does a low do it? A low-pressure system must compensate for the convergence of mass near the surface and shed that mass at high altitudes. Therefore, you will usually see a region of air diverging from the column over the center of a developing low-pressure system. As long as the low loses more weight at high altitudes than it gains near the surface, the total column weight will decrease, the surface pressure will decrease and the low will continue to develop.

(Left) Surface air converging around a center of low pressure rises to avoid unrealistic accumulations of air near the ground. Still, this rising air has weight. So, in order for the surface pressure to decrease and for the low to develop, there must be more divergence higher up over the low's center than there is convergence near the earth's surface. (Right) As surface air diverges from a center of high pressure, air sinks from high levels to replace it. To avoid an unrealistic depletion of surface air in the column over the center of a high-pressure system and to promote strengthening (surface pressure increases), convergence of air at high altitudes must exceed divergence near the surface.
Credit: David Babb

The weight program for a high-pressure system is just the opposite. Rather than trying to maintain weight loss over a central column, a high pressure center must maintain the mass build-up that has resulted in a higher pressure than its surroundings. But, surface air diverges from the center of a high, thereby helping to lower column weight. Obviously, the atmosphere must take measures that allow column weights and surface pressures to increase at the center of developing high pressure systems.

To understand the measures that the atmosphere takes so that high-pressure systems can maintain their weight, let's return to my dollop of whipped cream on the table. To simulate the divergence of surface air, imagine dropping a book on the whipped cream. Sure enough, whipped cream squirts out horizontally (a messy form of divergence) as the book smashes down on the dollop. Though not as violent or as messy, sinking currents of air go hand in hand with the diverging low-level winds around a surface high-pressure system. Weatherwise, sinking air tends to cause clouds to evaporate, paving the way for dry, bright weather.

Of course, air sinking from higher up and then horizontally diverging near the earth's surface doesn't solve the high's weight problem. How does a body-building high maintain the weight of the air column at its center? As with the low pressure center, the key is to look for what's going on aloft. In the case of a developing high pressure system, more air converges or "piles up"  in the column of air over the center of the high, offsetting the weight loss near the surface and allowing the column to undergo an overall weight gain. In turn, the surface pressure increases.