Getting a Handle on the Wind

Now that we've learned about all of the forces that play a role in determining the speed and direction of the wind, let's see how they all work together. Ultimately, the air's motion depends on the sum of the forces that act on it, so to examine the movement of the air we'll consider a sample "parcel" of air released in a uniform pressure field in the Northern Hemisphere, and examine how each force impacts the air parcel. To do so, we'll look at this interactive force diagram (keep the window open for the duration of our discussion), which will help you see the effects of adding various forces to a parcel of air. By convention, I'll use arrows to keep track of the pressure-gradient force, friction, the Coriolis force, and the parcel's velocity. 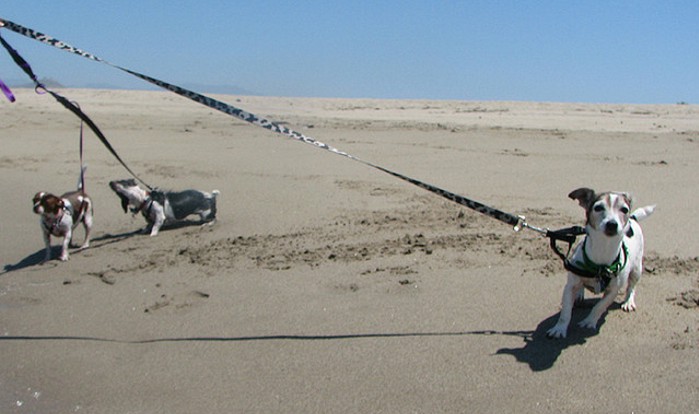 You can think about the forces acting on an air parcel as similar to a person walking several dogs. Each dog exerts its own force on his owner. The owner's resulting path (if he allows his dogs to pull him along) will be a result of the net force exerted by all of the dogs. So it is with air parcels when acted on by the pressure-gradient force, Coriolis force, and perhaps friction.
Credit:Pulling the leash / Peabo Blue / CC BY-NC 2.0 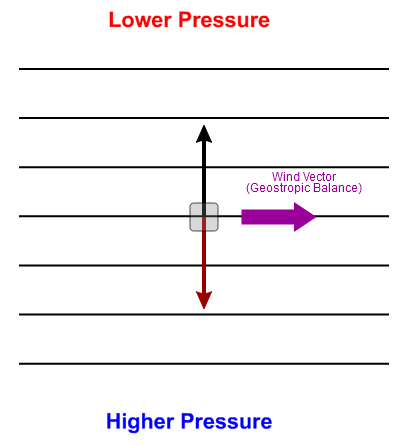 Whenever the pressure-gradient force and the Coriolis force balance each other, an air parcel in geostrophic balance will move parallel to the isobars.
Credit: David Babb

The atmosphere is constantly striving for balance, and in geostrophic balance, there is no net force acting on the air parcel (because the pressure-gradient force and Coriolis force balance each other). Therefore, (according to Newton's laws of motion) the parcel will cease its acceleration and continue to move in a fixed direction at a constant speed. In this case, the final direction of the air parcel is directly eastward (in other words, the wind blows from the west), but in general, the geostrophic wind blows parallel to local isobars. Regardless of the strength of the pressure-gradient force (you can try varying it in the interactive force diagram), the end result is geostrophic balance, with a stronger pressure-gradient force leading to faster wind speeds.

I should point out, however, that the geostrophic wind is an idealized wind. It never perfectly occurs in nature. As you know, near the surface of the earth, friction is a factor (which we're about to get into) that disrupts geostrophic balance. However, the real atmosphere is often very close to geostrophic balance at high altitudes, where friction becomes negligible. So, we could look at isobars on an upper-air weather map and immediately get an idea of the wind direction by always remembering that the geostrophic wind blows parallel to the isobars. Knowing that narrows down the possibilities for wind direction to essentially two choices. But, if you imagine standing on the map with the geostrophic wind at your back, low pressure should be on your left in the Northern Hemisphere, which will allow you to find the correct wind direction.

(Left) With the geostrophic wind to your back (which often approximates winds aloft) and your arms outstretched, your left arm will always point towards lower pressure in the Northern Hemisphere. (Right) With the surface wind to your back, low pressure will again be on your left, but, on average, it will lie about 30 degrees clockwise from your left arm (because friction prevents the wind from being geostrophic).
Credit: David Babb

Near the surface, however, we have to deal with friction, so let's add it on the interactive force diagram. Make sure that the pressure gradient, Coriolis, and frictional forces are all turned on so that we can simulate real conditions on a surface weather map and observe the magnitude and the direction of the surface wind. Notice that the wind velocity vector got smaller (because friction slowed the wind speed) and now the wind blows across isobars in toward lower pressure somewhat. If you imagine standing with the surface wind at your back in the Northern Hemisphere, low pressure is still on your left, but on average, it will lie about 30 degrees clockwise from your left arm (as shown above on the right). By the way, these "rules" are known in meteorology as Buys Ballot's Law.

Even with friction in the mix, the forces still achieve balance. Again, I'm going to skip some of the details of how the balance is achieved, but the process basically works like this:

So, ultimately, both friction and the Coriolis force work to oppose the effects of the pressure gradient force, but eventually a balance develops between the three forces and the parcel moves at a constant direction and speed. The bottom line is that the final path of the parcel takes it across the isobars inward toward lower pressure and away from higher pressure.

The angle at which a parcel crosses local isobars is determined largely by the magnitude of friction, and as you'll recall, friction depends on the velocity of the parcel as well as the roughness of the surface. Over land, the wind crosses the isobars at approximately 30 degrees, on average. Over the ocean and Great Lakes, the crossing angle (the angle at which the wind crosses the isobars) is generally less than 30 degrees, owing to less friction over usually smoother water (compared to rough land). Essentially, with less friction, the wind over the water is a bit closer to geostrophic than it is over land. In mountainous areas, where the effects of friction are greater, the crossing angle can be 45 degrees or even more. The difference in crossing angles can frequently be seen on weather maps (like the idealized map below). 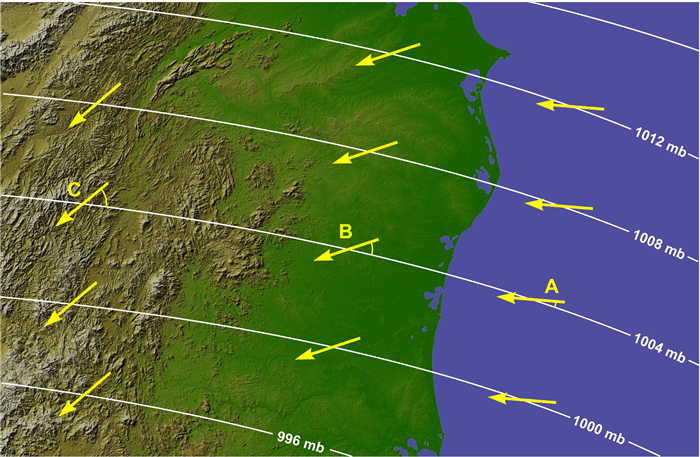 It's the combination of the forces you've learned about that give rise to the counterclockwise flow around areas of low pressure (and clockwise flow around areas of high pressure) that you've seen on surface weather maps, like the sea-level pressure analysis from 18Z on September 8, 2011 that I showed previously. In order to help you visualize the movement of air on maps of sea-level pressure, I created a couple of short videos that I think will help summarize the concepts we've covered, and help you determine wind direction from a map of isobars. The first video (1:46) will help you see how air parcels move depending on which forces are acting on them.

Using the recipe described in the video above, you should be able to estimate the wind direction just about anywhere on a map of isobars, but I think it's important that you get some practice. Therefore, I've dedicated the next section to an activity that will help you refine this Key Skill. Read on!