A Recipe for Making Clouds

‹ Net Condensation: Myth and Reality Clouds Made from Special Recipes ›

We've talked a lot about evaporation rates and condensation rates, which are two key components to understanding the conditions that lead to sustained net condensation and the growth of liquid water drops in the atmosphere. Why are meteorologists so interested in net condensation? Clouds are a product of net condensation! After all, clouds are simply collections of liquid water drops (and / or ice crystals) suspended in the air. In this section, I'm going to outline a simple recipe for making clouds. With apologies to a certain fast-food restaurant chain, in order to make a cloud, our basic recipe is the "Big MAC." The acronym "MAC" contains the key ingredients for a making a cloud:

We've already dealt with a couple of these ingredients, but now I want to put them together to complete the picture of how net condensation occurs in the atmosphere.

The fact that moisture is required to make a cloud is no surprise, so I won't spend much time on it. By "moisture," I specifically mean water vapor. If we're going to make a cloud (which is made of water in various forms), obviously we need to have some water vapor present.

Aerosols are essentially tiny particles suspended in the air, such as specks of dust, dirt, particles of air pollution, salt, etc. Yes, even though you can't usually see them, lots of tiny particles are suspended in the air. So, what do they have to do with cloud formation? In all of our previous discussions about evaporation rates, condensation rates, and relative humidity, water vapor had a surface to condense on to (liquid water in a container, or on the side of a cup, for instance).

The presence of an existing surface is extremely important to achieving sustained net condensation. While I didn't explicitly say so at the time, our initial discussion about evaporation rates, condensation rates, and relative humidity was based on the existence of a flat surface of water. Without a surface on which to condense, water vapor alone is very reluctant to condense onto itself -- so reluctant that relative humidity values near 400 percent are necessary for water molecules in the gas phase to cling to each other and grow into a detectable drop before evaporating.

In other words, in a world without a surface on which water vapor can condense, a lot of water vapor molecules need to hover near an embryonic water drop to locally boost the condensation rate and sustain net condensation, allowing the water drop to grow before it evaporates. That's because liquid water molecules have an easier time escaping (evaporating) from a tiny spherical drop than they do from a large, flat water surface. Therefore, evaporation rates from tiny, spherical drops are much greater than evaporation rates from a flat surface of water at the same temperature. But, we never see relative humidity values in the atmosphere anywhere near 400 percent, and yet cloud drops still form and grow. So, there must be some "preferred sites" for water molecules to condense in the atmosphere. 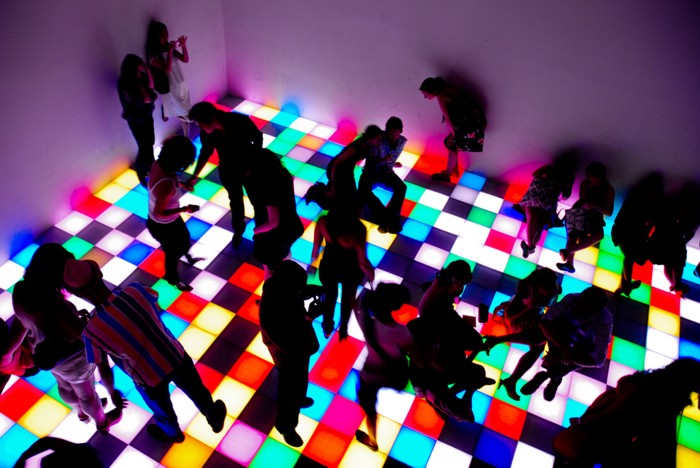 Without condensation nuclei, the atmosphere is like a dance floor with no place to sit down. Water molecules will resist condensation without having sites on which to condense.
Credit: Disco / PTGreg / CC BY-NC-ND 2.0

To get an idea about why this is true, consider the following analogy. Suppose that there's a wild dance party where there are no tables and chairs (only a dance floor). As long as the energy of the dancers is high, there is no need for them to sit down and collect in groups. They simply keep bouncing around the dance floor like energetic water vapor molecules. At some point in the evening however, some of the dancers' energy begins to wane, and they would happily sit out the next few dances if there were some tables and chairs available. Unfortunately there are none, and sitting down on the floor would be very uncool (and quite embarrassing). So, they just keep on dancing. Similarly, without sites where water molecules can easily condense (called "nucleation sites"), they are very reluctant to lose their gaseous state.

Now what if someone brings in several tables surrounded by chairs into the dance party? Many of the tired dancers will immediately grab a seat around a table, changing their state from "dancers" to "sitters." In this example, each table serves as a site where dancers can easily change state, and they do so readily. In the atmosphere, aerosols (dust, dirt, particles of air pollution, salt, etc.) provide surfaces onto which water vapor can easily condense into liquid water drops. These particles are called condensation nuclei. Without condensation nuclei, relative humidity would have to reach 300 to 400 percent in order for cloud drops to grow and not readily evaporate. 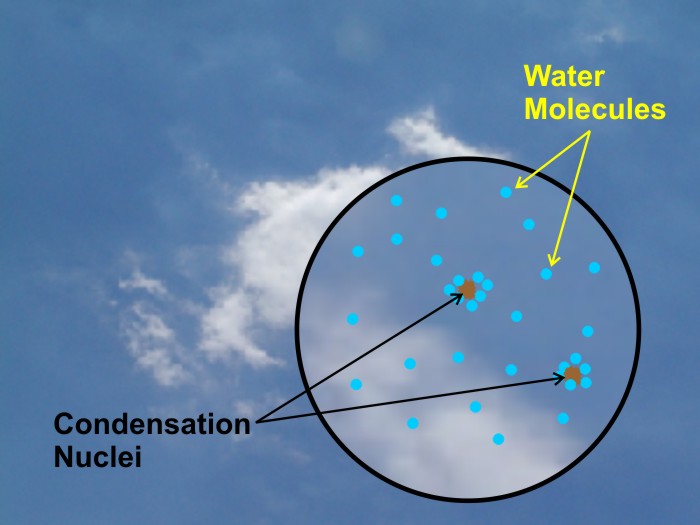 To complete the recipe for making a cloud, we need to cool the air. As I mentioned in the last section, cooling the air is the most common way to achieve net condensation in the atmosphere. Cooling allows water vapor molecules to slow down and reduces evaporation rates. Furthermore, with water vapor molecules moving more slowly, more of them sluggishly huddle around condensation nuclei, paving the way for them to condense and form liquid cloud drops.

So, what's the most common way to cool the air until net condensation occurs? Lifting it! To understand how lifting the air causes it to cool, let's start with the understanding that air pressure is greatest near the earth's surface, and decreases with increasing altitude. The number of air molecules per unit volume decreases at higher altitudes, and this reduced air density goes along with a reduction in air pressure at higher altitudes.

Now, imagine a "bubble" of air that rises from the ground. Initially, the bubble has the same air density and air pressure as the surrounding air outside the bubble. But, if the bubble of air is lifted, that's no longer the case. The air inside the bubble has a higher density and pressure than its surroundings. To balance things out, the air molecules inside the bubble push out on the sides of the bubble, causing it to expand. But, molecules are doing work to cause this expansion, which costs them kinetic energy. As a result, the air temperature in the bubble decreases, and this cooling continues as long as the parcel continues to rise and expand. If the parcel cools enough that the evaporation rate becomes slightly less than the condensation rate (relative humidity is slightly greater than 100 percent), then net condensation occurs onto cloud condensation nuclei and a cloud is born!

I should also point out that sinking air is the enemy of clouds. Sinking "bubbles" of air encounter higher pressures at lower altitudes, which cause the bubble to compress and warm up. So, while rising air is a common ingredient in cloud formation because it's associated with cooling, sinking air tends to evaporate clouds because it's associated with warming (and thus, higher evaporation rates and lower relative humidity).

Lesson Learned: Our basic recipe for cloud formation in the atmosphere is the Big MAC! We need Moisture (water vapor), Aerosols (particles to serve as condensation nuclei), and Cooling (typically accomplished by lifting the air because rising air expands and cools). If enough lifting and cooling occurs, then the evaporation rate will become slightly less than the condensation rate (net condensation occurs) and a cloud is born!