Another Reason Why Loose Rock Matters: Mass Movement and the Grand Tetons

The Grand Tetons tower above Jackson Hole, Wyoming, the epitome of western scenery for many people. A steep pull-apart fault lies along the front of the range and slopes downward beneath Jackson Hole. From the highest peaks to the Hole is well over a mile (roughly 2 km), but the total offset on the fault (including material eroded from the top of the range and deposited in the valley) is almost 6 miles (10 km). The uplifted block is primarily old metamorphic rocks that erode only slowly. The faulting is probably related to the Basin and Range extension that also gave us Death Valley, although the complexity of the region makes any interpretation difficult. Dr. Alley recalls huddling next to an overhanging rock, far up on the steep front of the Tetons, watching hailstones rattle off the trail from a black deck of clouds barely over his head. It is a truly awesome place.

A few miles (few km) east of the park is another interesting feature: the Gros Ventre slide. There, the rock layers slope steeply under a long ridge or mountain, with the layers almost parallel to the mountainside, down to the Gros Ventre River. Strong, resistant sandstone rests on weak, slippery shale. The river has eroded down through the sandstone and into the shale, leaving the toe of the sandstone unsupported. In June of 1925, after a particularly wet spring, the entire mountainside let loose, sliding down and across the river. The slide mass made a dam, trapping a lake miles long and 200 feet (60 m) deep. The entire slide probably required only seconds to occur, and moved cubic miles (many cubic kilometers) of rock.

Such a debris dam is not very strong; water flow through its pore spaces or over it can remove rocks and weaken it greatly, until it collapses catastrophically. When we were discussing earthquakes, we saw that a similar slide happened during an earthquake in 1959 just northwest of Yellowstone, damming a river to form a new lake, and that the Army Corps of Engineers had rushed in to prevent collapse of the dam. The Corps had learned from previous experience, including events at Gros Ventre. In 1925, efforts were not made to stabilize the dam there. It collapsed two years later, washing out a small town downriver and killing six people. 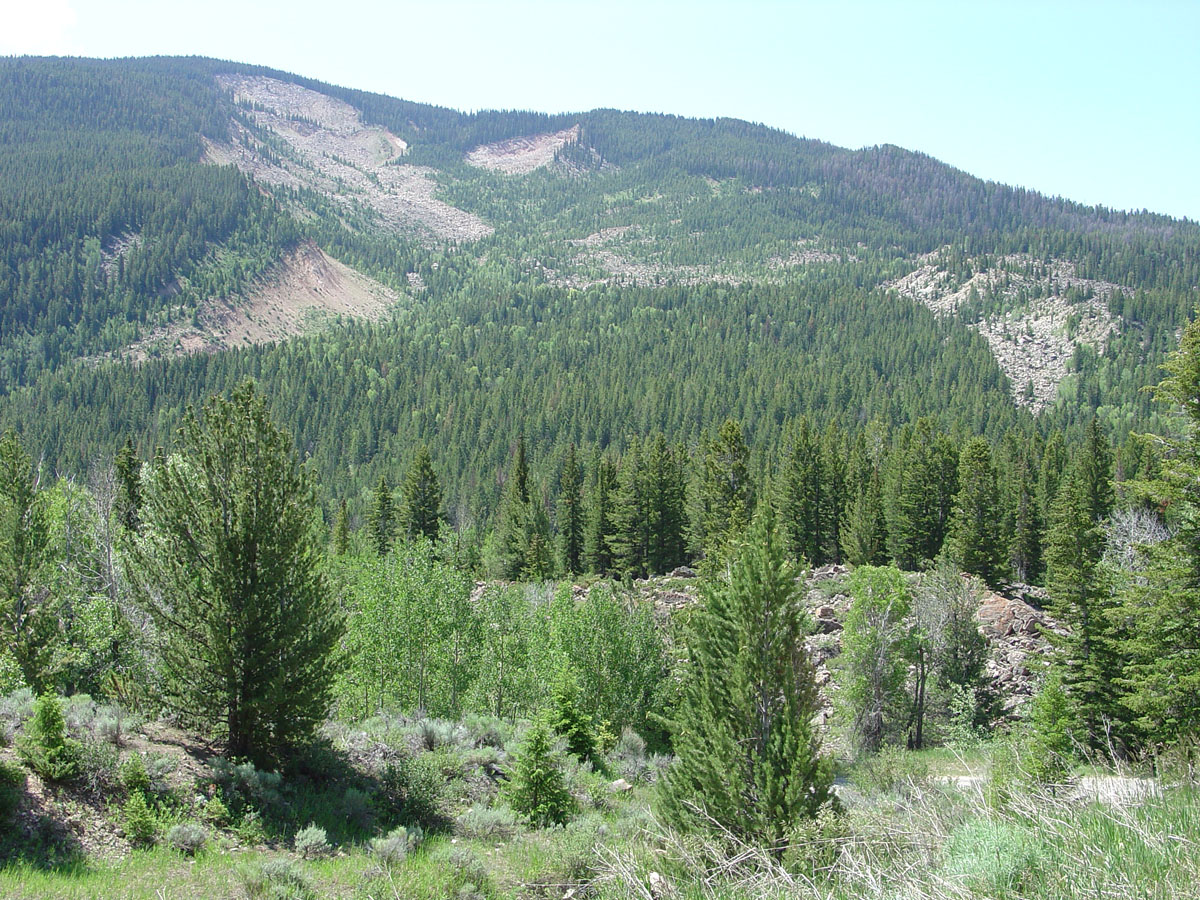 The Gros Ventre slide. Notice the trees in the foreground, this was a big landslide!
Credit: Phil Stoffer, USGS, Public domain

The Gros Ventre slide is an especially dramatic example of an important but usually-more-boring process: mass movement. This is the name give to the downhill motion of rock, soil, debris, or other material, provided the flow is not primarily water (if material is washed along by a river, we call it a river), or a glacier or wind.

Water is usually involved in mass movement, however, because most mass movements occur when soil or rock is especially wet. This happens for four reasons: water makes the soil heavy; water lubricates motion of rocks past each other; water partially floats rocks (a rock pushes down less in water than in air) so they are not as tightly interlocked and can move more easily past each other, and saturation of a rock mass removes the effect of water tension.

This last deserves a bit more explanation. Think about going to the beach and building sand castles. Dry sand makes a little pile with sides rising at maybe 30 degrees. Totally saturated (wet) sand flows easily, forming a pile with a much more gradual side. But damp sand can hold up a vertical face. You can even make and throw damp sand balls (be careful where you throw them).

The details of the surface physics involved are a bit complicated, but basically, a drop of water will sit at the junction of two sand grains. Pull the sand grains apart, and some water will end up on each grain. This requires “breaking” the water; what had been one continuous film of water is now broken into two. Next, think of a dripping faucet. A water drop doesn’t fall off immediately, but first becomes large and heavy. Clearly, water has strength, and does not “like” to be broken. (This strength arises from the attraction of water molecules for each other, and is usually called surface tension.) Damp sand thus is strong—a landslide would require some sand to move rapidly past other sand, breaking the water bonds between the grains. In fully wet sand, however, the grains move about in the water without ever breaking it, so motion is easy.

There are elaborate classifications of mass movements, depending on how fast, how wet, how coarse, how steep, and how "other" they are. Most of the names make sense: falls are rocks that fell off cliffs, topples are rocks that toppled over from cliffs, landslides and debris flows and debris avalanches are fast-moving events, and slumps are failures of blocks of soil along concave-up curved surfaces, something like a person slumping down in a chair.

One fascinating, and scary, type of mass movement occurs on “quick” clays. These are clays usually deposited beneath the sea, in which the playing-card-shaped clay particles exist in a house-of-cards structure stuck together by ions of the sea's salt, which sit in the spaces between clay particles. When raised above sea level, ordinary water begins to replace the ions of the salt, and the structure becomes weaker. Eventually, it may fail catastrophically, going from a solid to a very thin liquid almost instantaneously, and generating a flow. Flows from such clays are known especially from parts of Canada and Scandinavia. Such a flow crossing a road can pose a problem, because bulldozing the clay out of the way does little good; more just flows across. But throwing a bag of salt into the flow near the road and driving a tracked vehicle through to mix the salt and clay may cause the flow to solidify so that it can be bulldozed away. Tragically, large portions of some towns have been destroyed, with much loss of life and property, when such quick clays have failed under buildings. Fortunately, these are quite rare.

Soil creep is the slow, downslope motion of soil. The diagram shows one of the many mechanisms that contribute to soil creep. When ice grows beneath a pebble on a winter night, the pebble is pushed up and out, more-or-less perpendicular to the hill surface. When the ice melts, the pebble drops straight down, to a point lower on the hillside than where the pebble started.
Credit: R.B. Alley

The most important mass-movement type in terms of transferring material downhill is soil creep, the slow (typically inches, or centimeters, per year or less) downslope motion of soil. Creep may be a very slow landslide. It may occur from freeze-thaw processes—a column of ice that grows under a small pebble on a cold night pushes that pebble out from the hillslope, and the pebble falls straight down when the ice melts, effectively moving a tiny distance down the hill (see the figure above). When trees fall over and uproot soil, or when groundhogs and even worms dig out rock grains and allow them to move downhill, creep is occurring. If you look at a typical hillslope, streams on the lower slopes are present to move water and rock downhill, but the upper slopes lack streams. There, soil creep serves to move material downhill.

Hillslopes typically reach a balance, in which weathering breaks down rocks about as rapidly as mass movement and streams take the broken rocks away. The balance may occur with bare rock sticking out (as in some cliffs, for example), or with a lot of soil covering the rock. If soil creep dominates the mass movement, the hillslope may always be close to balance. If landslides dominate, then the soil will build up for a long while before suddenly slumping off, and you have to watch for a long time to see that formation and transport of soil are in balance. And, over very long times, the hill will eventually flatten, causing the mass movement to slow. However, soil will very gradually thicken to slow the weathering as the hillslope is reduced, and near-balance will be maintained.

Humans are greatly upsetting this balance worldwide. Our activities—bulldozing, cutting trees whose roots held the soil, plowing, and more—are moving more material than nature moved before we were involved.

‹ Textbook 5.2: The Badlands up Virtual Field Trips ›
GEOSC 10: Geology of the National Parks