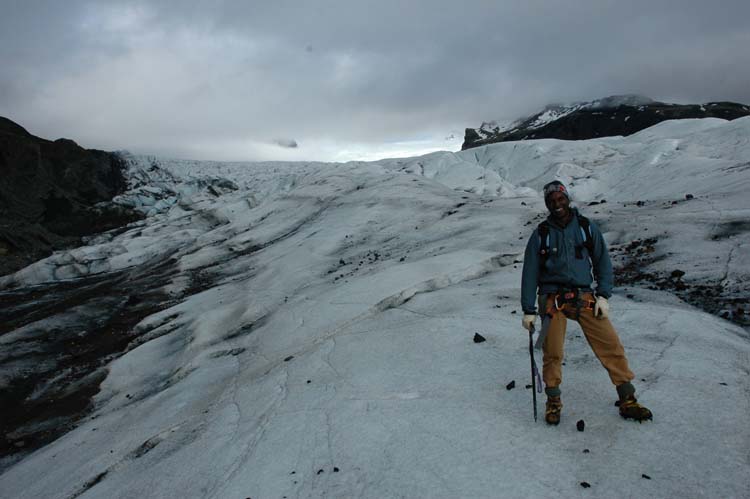 Dr. A standing on a glacier in Iceland.

Welcome to GEOSC 10! Throughout these online course materials, you will see "me" and "I" used. So who am I? My name is Sridhar Anandakrishnan and I will be your instructor for GEOSC 10. I am a geophysicist who works on glaciers and ice sheets in Antarctica and Greenland to try and figure out what the future holds for these huge masses of ice. I divide my time between teaching (this class and other classes for undergraduate and graduate students in geosciences) and research into glaciers. I did my studies at Columbia University in NY, followed by a Ph.D. from the University of Wisconsin at Madison. I have been at Penn State since 1992. Geophysics is the use of the principles of physics (things like electrical waves or sound waves) to better understand the Earth. In particular, geophysics lets us determine properties deep inside the Earth that we can’t directly measure. When not in work mode, my attention goes to the family, cats, bicycles, and gardening. Here is a brief, 1-minute video biography.

Hi. My name's Sridhar Anandakrishnan. I'm an Associate Professor of Geosciences at Penn State University. I'm going to give you a short bio, a little bit of background about myself. I first went to Antarctica gosh, almost 30 years ago, 1985 was the first time I went down. I went down just as a worker on a project with some other folks that were studying these glaciers. I just went there to look around and to help out on the project. I was captivated by really the stark and uncompromising beauty of the continent, and I decided I want to study this.

Over the years, I discovered that not only was it personally fulfilling because I was working in a beautiful place, but it was also important for the rest of the planet. What happens in Antarctica doesn't just stay in Antarctica. It actually comes out and affects the rest of us here. And I've enjoyed very much being a part of that search.

While I am your instructor this semester, it was a team of individuals who developed and authored this online version of GEOSC 10. First and foremost, this course was prepared by me and Dr. Richard Alley; we are both professors in the Department of Geosciences at Penn State. You will literally see and hear both of us throughout the course via audio and video clips.

Sridhar Anandakrishnan is a geophysicist and a Columbia University and Wisconsin (Go Bucky!) graduate, who has been at Penn State off and on since 1992. Dr. "A" splits his time between teaching (this intro class, geophysics classes, and some math and computer related classes for geoscientists), service (committees, panels, talks to the public), and research (what's under the glaciers and will they melt?). He has spent a good chunk of his time in Antarctica doing research on and about the glaciers there. Go to the US Antarctic Program's newsletter for a flavor of life and work in Antarctica. When not in work mode, Dr. A's attention goes to the family, cats, bicycles, and gardening.

‹ Meet Dr. Alley up How to Succeed in GEOSC 10 ›
GEOSC 10: Geology of the National Parks