Why the Wind Spins

The rotation of the Earth is surprisingly fast. If you buckled a belt around the Earth at the equator, the belt would need to be 25,000 miles (about 40,000 km) long. The Earth spins once every 24 hours. This means that the Earth’s rotation is moving a point on the equator just over 1000 miles per hour (1600 km/hr). In comparison, a point near the pole is essentially stationary (the pole itself stays in place as it rotates). Dr. Alley has walked around the South Pole in three steps, but he couldn’t walk around the equator in a day. If this doesn’t make sense, get a tennis ball or the head of a friendly classmate, draw an equator, and try it out! 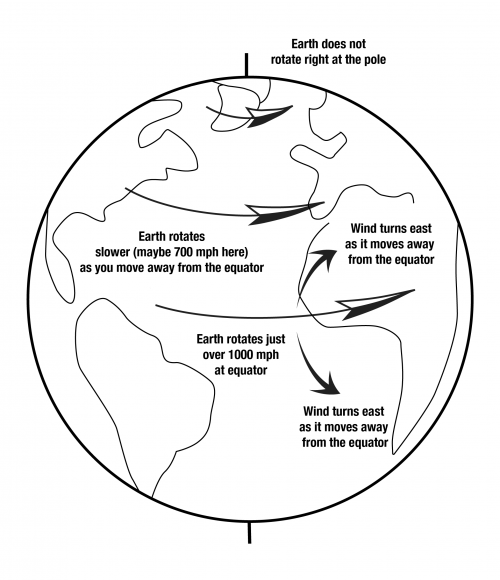 Now, suppose that you watch a parcel of air that rises at the equator and begins moving towards the North Pole in a convection cell. Once the air has moved a ways north, the Earth under it is no longer rotating at 1000 miles per hour, but is somewhat slower, perhaps 900 miles per hour and dropping northward toward zero at the pole. But aloft, there aren’t trees and mountains to slow the air down from the 1000 miles per hour it had at the equator. Thus, this air “gets ahead” of the Earth. The Earth rotates to the east—you see the sun rise in the east as the rotation of the Earth brings the sun into view—so, the equatorial surface air is moving east at 1000 miles per hour. As this air moves northward over slower-moving land, the wind will appear to turn to the right or east as it blows, getting ahead of the ground. Wind heading south from the equator will also move east ahead of the surface, making a left turn.

Similarly, wind moving from the pole to the equator in the returning limb of a convection cell will lag behind the rotating surface of the Earth, again seeming to turn to the right in the northern hemisphere (and to the left in the southern hemisphere). Thus, the wind cannot go directly to where it “wants” to go; instead, it turns and tends to go in circles. The circular air flow around low-pressure systems and hurricanes is unavoidable on a rotating Earth.

More-precise definitions are possible of this “Coriolis effect,” the turning of flows on a rotating Earth. The intuitive explanation given above will fail you if you think of a wind moving due-east or due-west, because those also turn. Starting from conservation of angular momentum might be better, and you can find that in any good meteorology textbook. Notice, however, that the explanation given above will get the right answer for you, in how much the wind will turn, and which way.

Notice also that Coriolis turning affects large, fast flows. The convection in the Earth is too slow to feel Coriolis much. The difference in rotation speed between opposite sides of a sink or toilet is so tiny that Coriolis turning has no significant effect on the direction that water swirls as it goes down. That is controlled by the design of the sink or toilet, and by any motion in the water at the time the drain is opened; get the water swirling in a sink and then pull the plug, and the water usually will keep swirling in the way you started it as it goes down. Dr. Alley has seen both clockwise and counterclockwise flows in Pennsylvania and Greenland, and in New Zealand and Antarctica.

More Enrichment: Why Cold Air Sinks but Valleys Are Warmer than Mountain Peaks

When air moves up, it expands, which requires that work is done in pushing away other air to make room for the expansion. The work requires energy, which comes from the heat energy in the air, so the rising air cools. Similarly, when air moves down, it contracts as the surrounding, higher-pressure air squeezes the sinking air parcel, and this squeezing is work that is done on the sinking parcel, and warms the parcel. If this is happening near the surface of the Earth, and the air is dry, the change in temperature is about 1oC per 100 m of vertical motion. This applies everywhere, at all times. So, in the 2004 movie, The Day After Tomorrow, when huge storms brought air down from above so rapidly that the air didn’t have time to warm up, that was complete hooey.

Now, imagine that a “chunk” or parcel of air, sitting somewhere, cools a little (say, by radiating energy to space as the sun goes down in the evening), and you want to know whether that air parcel will sink now. If your air parcel sinks, it must warm by about 1oC per 100 m of sinking, and it must push other air out of the way. You measure the temperature of your parcel, add 1oC for the warming from sinking 100 m, and if your air is still colder than the air it must displace 100 m below, then your parcel will sink. (Friction comes in as well—if your parcel plus 1oC would be only a tiny bit colder than the air it must displace, motion is unlikely; you need a notable difference.)

Overall, a balanced, stationary atmosphere will cool upward by about 1oC per 100 m under dry conditions, and slightly less under wet conditions (when cooling causes condensation that releases heat which offsets some of the cooling, or warming causes evaporation that uses heat which offsets some of the warming). Vertical motions will be triggered when cooling or warming creates air that is anomalously cold or warm relative to this stationary profile. So, cold air on a mountaintop won’t necessarily sink, unless that mountaintop air is anomalously cold. Perhaps on an October evening in the Appalachians, when a fog develops and holds heat in the valleys while the mountaintop radiates heat to space, then the mountaintop air will become anomalously cold and sink to the valleys.

‹ Video Lecture up A Rocking Review ›
GEOSC 10: Geology of the National Parks