‹ Lesson 11: Patterns of Wind, Water, and Weather in the Tropics The General Circulation ›

Upon completion of this section, you should be able to identify the meteorological region referred to as the tropics, be able to give context for its size (in relation to the entire earth), contrast typical temperature and pressure patterns in the tropics with those in the mid-latitudes, and discuss why the tropics are important energetically to the general circulation.

If we're going to study the tropics, we should start by defining exactly what the tropics are, but in reality, folks can't seem to agree on a single definition of the tropics. The definition from the glossary of the American Meteorological Society, for example, is pretty vague! Other definitions are based on geography, and define the tropics as the area between certain latitude lines in each hemisphere. 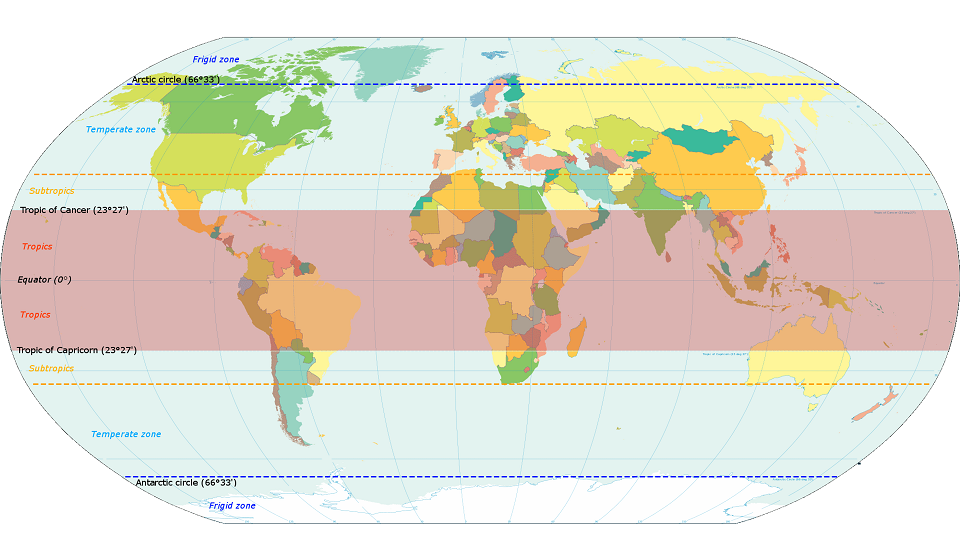 The tropics are commonly defined as the area between the Tropic of Cancer (roughly 23.5-degrees North latitude) and the Tropic of Capricorn (roughly 23.5 degrees-South Latitude), highlighted in crimson. We'll consider the tropics to be a bit larger, spanning from 30-degrees North to 30-degrees South latitude.
Credit: By KVDP - Own work, CC BY-SA 3.0, Link

We'll explore these throughout the coming lessons, but for now, also consider that the intense solar heating over the low latitudes of the tropics throughout the year has consequences for global energy balance, as well. To see what I mean, check out the short video (2:21) below.

As discussed in the video, the relatively large losses of infrared energy to space over the tropics only partially offset strong solar heating, resulting in a broad surplus of energy that varies little with latitude between 30 degrees North and South latitude. This relatively even distribution of surplus energy across the tropics accounts, in part, for the general lack of moderate to large horizontal temperature gradients in the tropical troposphere.

One other reason for the generally small temperature gradients at low latitudes is that water covers approximately 75 percent of the tropics. That means the uniform surplus of energy in the tropics gets distributed over large expanses of water, thus further limiting opportunities for large temperature gradients to form (cold air traveling over relatively warm ocean waters gets rapidly modified).

The figure above represents the long-term average of annual surface air temperatures across the globe. I point out that there are indeed temperature gradients between tropical land masses and surrounding oceans, but the overall pattern of temperature gradients in the tropics is weak compared to those at higher latitudes.

Now, I readily admit that any annual average in temperature tends to "wash out" strong signals of gradients in winter, so perhaps a look at temperatures for a single day would be more telling. Check out daily global surface temperatures for January 7, 2018 (units are Kelvin), when sharp temperature gradients existed over eastern North America, for example, on the fringe of a continental Arctic air mass. Now, compare them to the flabby gradients over the tropics. No contest, wouldn't you agree? Notice that there are some sharper gradients along the outer fringes of the tropics near 30 degrees north. These larger gradients near 30 degrees are not unusual, given that Arctic air masses drive farther south in winter (occasionally into the fringes of the tropics). In the heart of the tropics, however, gradients are small by any standard.

But, it's not just temperature gradients that are small in the tropics. Pressure gradients are small, too (aside from tropical cyclones). For example, check out the chart of average sea-level pressures at 00Z on February 12, 1998 (units are Pascals; 1 Pascal = 100 millibars). At the time, there were intense northern hemispheric low-pressure systems over the Gulf of Alaska, the Great Lakes, the middle Atlantic Ocean, northern Russia and the east coast of Asia (splotches of blues and purples on the map). Meanwhile, robust high-pressure systems (bigger blobs of greens, yellows, oranges and reds) were interspersed between the intense lows. In the tropics, on the other hand, pressure patterns are much more relaxed and much more equable than the middle latitudes. In other words, prominent centers of high and low pressure are more difficult to find, especially equator-ward of latitudes 30 degrees north and south. The one exception was a spot of relatively low pressure (blue splotch) just to the east of Madagascar in the southwest Indian Ocean, which is the signature of Tropical Cyclone Ancelle.

Since the pressure gradient force is a primary driver of wind speed, you might think that the winds are almost always weak in the tropics (outside of tropical cyclones, that is), with the small pressure gradients that exist there. But, that's far from the truth! To help you visualize the fact that many places in the tropics are quite breezy, despite small surface pressure gradients, I'm going to introduce a type of plot called a "wind rose." Wind roses display the observed frequency of wind directions (and sometimes speeds) at a particular location. On the left below is a histogram displaying frequencies of observed wind speeds (in meters per second) at an ocean buoy moored at 8 degrees South, 95 degrees West during the year 2002. On the right is the corresponding wind rose for the buoy, which shows the frequency of observed wind directions during the same year.

From these two images, we can quickly get two important messages. First, wind speeds at the buoy were between five and nine meters per second (roughly 10 to 20 miles per hour) the vast majority of the time, which hardly constitutes "weak" winds. Second, the direction from which the wind blew during the year was remarkably consistent. To get your bearings with the wind rose, note that each concentric ring represents a ten-percentage point increase in the relative frequency of the observed wind direction. Thus, the daily mean wind direction of 130 degrees (from the southeast) occurred on nearly 45% of the days, and the daily mean wind direction of 140 degrees occurred on about 28% of the days! The wind rose clearly demonstrates that winds retained their overall southeasterly direction for almost the entire year (and didn't deviate much from 130 degrees). Such consistency is in stark contrast to the middle latitudes, where the many high- and low-pressure systems that pass by during the year result in wind directions that are much more variable.

As you'll soon learn, persistent winds from the southeast (in the Southern Hemisphere tropics) and northeast (in the Northern Hemisphere tropics) are the signature of the reliable "trade winds." To start unraveling the mystery of these persistent tropical breezes, we have to start exploring how air circulates through the tropics. Not surprisingly, the direct solar heating in the tropics throughout the year again plays a critical role. Read on.

‹ Lesson 11: Patterns of Wind, Water, and Weather in the Tropics The General Circulation ›
METEO 3 Introductory Meteorology