‹ Subtropical Highs Tricks of the Trades ›

Upon completion of this section, you should be able to discuss the formation and average location of the subtropical jet stream (STJ), its seasonal variations in intensity, and its impacts on mid-latitude weather.

In our discussion of subtropical highs, we ignored the earth's rotation and the Coriolis force when we discussed the high-altitude, poleward flow in the Hadley Cell. Because our planet rotates, air doesn't flow directly toward the poles at high altitudes. Indeed, it takes a much more swirling route. As air flows poleward in the upper branch of the Hadley Cell, eventually it curves toward the east (in the Northern Hemisphere). The end result is that air parcels in the upper branches of the Hadley Cells end up circling the earth during their lofty treks from equatorial regions to the subtropics. This poleward spiral culminates in the subtropical jet stream ("STJ", for short) near 30-degrees latitude.

The STJ was actually one of the last major tropospheric features to be discovered by direct human observation. During World War II, American pilots, while flying westward in the vicinity of Japan and other islands in the Pacific, reported ground speeds dramatically lower than the aircraft's indicated air speed. Flying at very slow speeds relative to the ground could have meant only one thing - one whopper of a headwind! Check out the image below, which shows the long-term-average wind speeds (in meters per second) and directions near 40,000 feet over Asia and the western Pacific Ocean during meteorological winter (December, January and February). The narrow ribbon of fast winds near latitude 30 degrees marks the average position of the STJ. Although pilots could make little headway on some of their missions, they had made a major discovery! 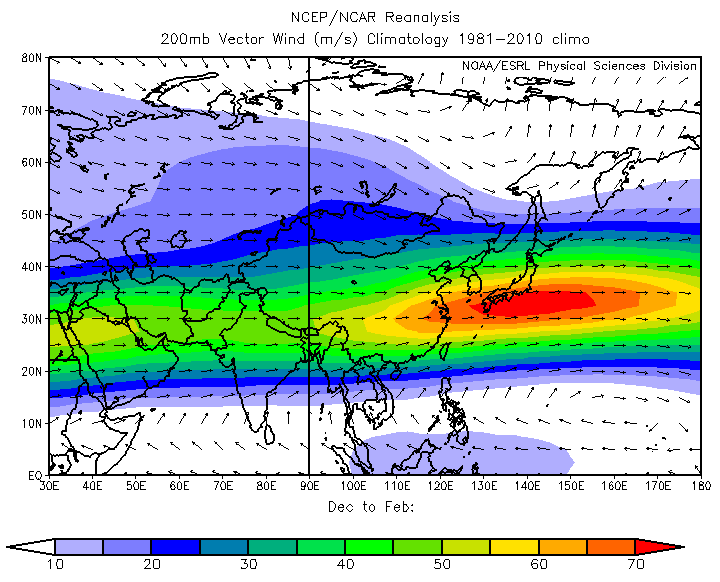 The long-term average wind speeds (in meters per second) and wind directions near 40,000 feet over Asia and the western Pacific Ocean during meteorological winter (December, January, February). Note the strong signal from fast winds near 30-degrees north, marking the mean position of the subtropical jet stream.
Credit: ESRL

In fact, the STJ is stronger over the western Pacific region, on average, than any other place in the world. That's primarily because the Himalayan and Tibetan high ground interrupt and divert the generally westerly flow of air in the upper troposphere. Farther east, diverted branches of air flow back together and accelerate near Japan. For reference, the image above shows that average speeds in the STJ near Japan can exceed 70 meters per second (about 157 miles per hour) during meteorological winter.

The overall mechanism for maintaining the STJ near 30-degrees latitude, however, is the tendency for air parcels to conserve their angular momentum in the upper branches of the Hadley Cells. Recall that the conservation of angular momentum is the concept that explains how figure skaters spin so much faster when they pull their arms inward (decreasing their distance from the axis of rotation). As parcels in the upper branches of the Hadley Cells spiral poleward, their distance from the earth's axis of rotation decreases, resulting in faster speeds. In theory, air starting from rest (relative to the earth's surface) high over the equator will reach latitude 30 degrees with an eastward speed of 134 meters per second (roughly 260 knots, or 300 mph) assuming that it perfectly conserves its angular momentum along its route.

It turns out that the STJ is stronger during winter than summer, despite a greater poleward extent of the upper branch of the summer hemisphere's Hadley circulation. That might seem odd, given that the main driving mechanism of the STJ is the tendency for parcels to conserve angular momentum (which would result in faster speeds when the STJ is at higher latitudes). So, why don't lofty air parcels traveling farther poleward in summer accelerate greatly as they spiral even closer to the earth's axis of rotation?

As it turns out, intense solar heating over the land masses in the Northern Hemisphere's subtropical region upsets the apple cart of the Hadley circulation. In a nutshell, it basically gets much hotter at latitudes near 30-degrees north (mostly over land) than over equatorial regions, thereby reversing the typical north-south temperature gradient. To confirm this observation, check out the long-term average temperatures over the tropics and subtropics for June, July and August. Given that our prototype model of the Hadley Cell is rooted in the assumption that the belt of maximum heating occurs over equatorial regions, it should come as no surprise that when this belt shifts poleward to the subtropics, our model of the idealized Hadley circulation breaks down. As a result, the strength of the STJ takes a hit, and the STJ does not play as important a role in the overall weather pattern during summer.

(Left) Only relatively weak streaks of winds near 40,000 feet mark the mean position of the subtropical jet stream during the Northern Hemisphere's meteorological summer. (Right) Winter is a different story, with a much stronger STJ.
Credit: ESRL

To see the change in the strength of the STJ between summer and winter, compare the average winds near 40,000 feet over North America and adjacent oceans during summer and winter (above). For starters, you can see a signature of fast winds over the central and northern United States. That's the footprint of the mid-latitude jet stream. To mark the STJ, I've used thick black arrows in each image. In summer (left image above), there are two relatively weak streaks of winds associated with the mean position of the summer STJ. One stretches from Hawaii toward the Southwest U.S. and the other heads from the mid-Atlantic Ocean toward northwest Africa. These "streaks" of winds pale in comparison to the robust winter STJ (right image above).

During winter, the robust STJ can contribute to major winter storms over the middle latitudes. The STJ is a semi-permanent feature, and remember that its average location is largely fixed by the rate of rotation of the earth. However, local changes in temperature and pressure gradients can cause parts of the STJ to bulge a bit farther poleward or sag a bit farther southward from time to time. By and large, the northernmost reach of the STJ corresponds to the southernmost extent of the more nomadic mid-latitude jet stream. So, it's safe to assume that the two jet streams sometimes interact, and sometimes the stage can be set for the rapid development of mid-latitude cyclones, particularly over the Atlantic Seaboard, where the natural land-sea temperature contrasts provide favorable breeding grounds.

One such memorable interaction resulted in the surprise Presidents' Day Snow Storm of 1979 for Washington, D.C. and surrounding Middle Atlantic and Southeast states. In this case, the STJ was drawn northward in southwesterly flow ahead of a strong trough in the mid-latitude jet stream (sometimes referred to as the "polar" jet stream, marked in blue). This configuration allowed the STJ to act as a catalyst for the Presidents' Day storm of 1979. Farther to the east, over the Atlantic Ocean, the STJ takes a more eastward and eventual southward turn (off the image to the right) as it starts to return toward its mean position. 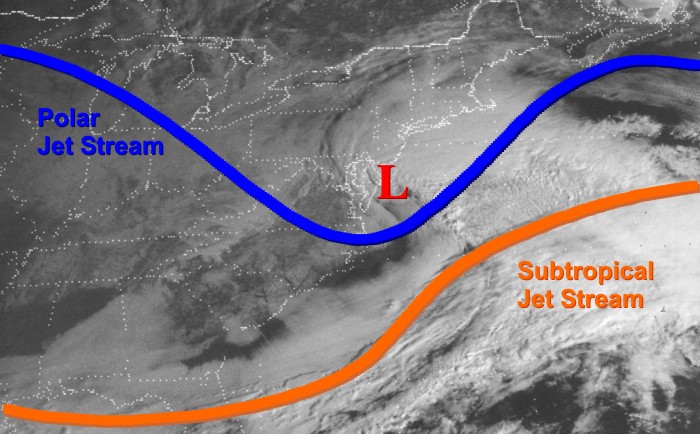 Intense upper-level troughs traveling over the middle latitudes sometimes help to draw the subtropical jet northward, often setting the stage for intense mid-latitude cyclones. An annotated visible satellite image from 12Z on February 19, 1979, shows the configuration of the STJ as it was drawn northward to ignite the Presidents' Day storm of 1979.
Credit: NOAA

In its wake, the Presidents' Day Storm left heavy snow from Georgia to Pennsylvania, as seen on this visible satellite image from 19Z on February 19. Indeed, many major winter storms in the mid-latitudes benefit from the STJ being drawn northward as in this case. So, while the Hadley Cells regularly control aspects of tropical weather, they can certainly have impacts on weather in the mid-latitudes, too!

In terms of the Hadley Cells, we've now covered the ascending branch in the ITCZ, the upper-branch (which culminates in the STJ), and the descending branch that forms the subtropical highs near 30-degrees latitude. Up next, we'll turn our focus to the final branch of the circulation -- the trade winds: the surface flow that returns toward the ITCZ from the subtropics. Read on!