‹ Tricks of the Trades El Niño and La Niña ›

When you've completed this section, you should be able to properly define monsoon and discuss the causes of the Indian and Southeast Asian Monsoons, as well as the resulting weather. You should also be able to compare the size of the wind shifts associated with the Indian Monsoon and the North American Monsoon, as well as define monsoon depressions and discuss the weather associated with them.

Many tourism guides suggest that the best time to visit Agartala (the capital of the state of Tripura in Northeast India) is October through April. That's largely based on rainfall (and to a lesser extent, temperature). To understand why October through April is the best time to visit Agartala, check out the image below, which documents the rainfall history of Agartala from September 28, 2003, through September 28, 2004. Look at the bar graph of daily rainfall on the lower half of the image. Note that the left vertical axis designates rainfall in inches, while the vertical axis on the right expresses rainfall in millimeters (approximately 25 millimeters equals one inch). Although several inches of rain fell in the first three weeks of October, 2003, the period from October through April was otherwise dry. The running tally of the rainfall on the upper graph (the thick line) is essentially flat during the dry period, holding steady at about 10 inches. But, there was only a slight deficit in rainfall by April (the thin line, which represents the long-term average rainfall, lies above the running tally and the rainfall deficit is shaded in brown), suggesting that such dry conditions are fairly normal.

(Top) The thick line shows the running tally of rainfall at Agartala in northeast India from late September, 2003, to late September, 2004. The thin line plots the running tally of average rainfall at Agartala. Thus, green represents a surplus in rain, while brown marks a deficit. (Bottom) A bar graph of the daily observed rainfall in inches (left) or millimeters (right). A break in summer monsoon rains occurred in early to mid August.
Credit: NOAA / Climate Diagnostics Center

So, there's no doubt that the period from October through April was dry (and, indeed, it constitutes the "dry season" at Agartala). Then, starting in June, it's as if someone threw a switch and the heavens opened up, with almost 80 inches of rain falling within about six months. Note that, with the exception of a noticeable "break" in early to mid August, it rained most days at Agartala (with a couple of days bringing about nine inches each).

Such definitive dry and rainy seasons are the hallmark of the Indian and Southeast Asian monsoon. Lest you think I've lost all my marbles by lumping the dry period into this discussion of "monsoons", I point out that the word "monsoon" derives from the Arabic word mausim, which translates to "season". Meteorologically speaking, monsoon means "a seasonal wind". Monsoons are actually defined by seasonal shifts in prevailing wind. Yes, it's common to hear people (even some weathercasters) throw out the term "monsoon" for any siege of rainy weather, but such usage is technically incorrect.

Definitive seasonal shifts in wind from Africa to southeast Asia qualify a major portion of the tropical Eastern Hemisphere as the world's major monsoonal region. So, what causes this seasonal shift in wind direction? In a sense, monsoons are much like gigantic sea / land breezes. Recall that the sea breeze develops because of uneven heating between land and water. On a sunny day, the land warms more quickly than adjacent ocean waters, which causes the average density of air columns over land to decrease slightly, which reduces the weight of local air columns and reduces surface pressure. Meanwhile, the air over water remains cooler (and more dense) and an area of high pressure develops offshore. These pressure differences cause low-level air to flow from the water to the land, generating an onshore wind called the sea breeze. At night, the opposite occurs: Land cools off more quickly than adjacent water, and the circulation reverses, resulting in an onshore flow called the land breeze. 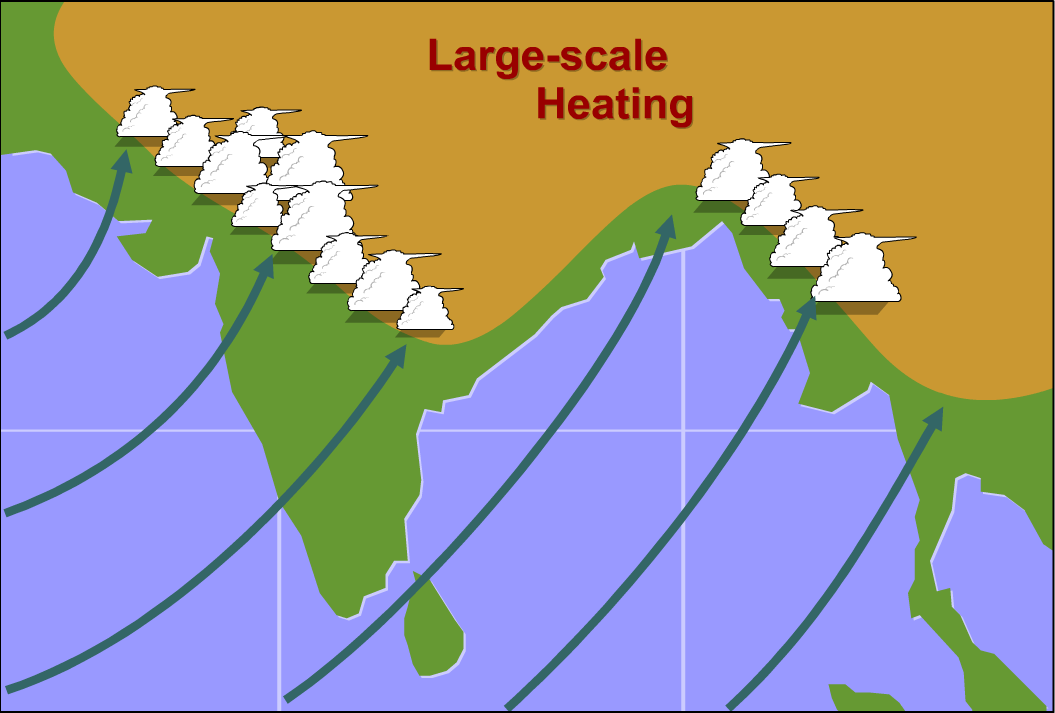 Intense heating over southern Asia results in the development of a gigantic sea breeze in the summer, paving the way for frequent showers and thunderstorms as moist air flows onshore.
Credit: David Babb

It's no coincidence that the majority of the land in the world's major monsoon region lies north of the equator. Moreover, there's a large expanse of sea that dominates the southern part of the monsoon region, setting the stage for the development of a gigantic sea breeze during the Northern Hemisphere's summer, when intense heating of southern Asia and western North Africa results in a large land-sea temperature gradient. Like its small-scale cousin, a large-scale sea breeze develops and transports moist air inland, paving the way for formidable showers and thunderstorms (check out the schematic on the right). As October ends and the seasonal cooling of the land is well underway, there is a gradual transition to the offshore winds of the winter monsoon (akin to the land breeze at the shore). Indeed, the zone of highest temperature shifts southward, eventually setting up over the Southern Hemisphere.

To examine further, let's focus on India, since it lies near the heart of the major monsoon region. India is hot in the summer, but the temperatures in much of the country actually peak in May. To see how hot India is in May, check out the map long-term average temperatures. The average temperature in parts of India is near 100 degrees Fahrenheit! That's the average of daily high and low temperatures during the month, not just daily highs! The broiling heat of May draws the monsoon trough, which is just the regional manifestation of the equatorial trough, northward into India. As this occurs, southeasterly trades in the Southern Hemisphere invade the Northern Hemisphere as convergence with the ITCZ shifts to the Northern Hemisphere. Gradually, these winds turn into southwesterlies over the Arabian Sea and Indian Ocean (in response to the right-deflecting Coriolis force), and moisten as they travel over warm waters. Eventually, the surge of moist southwesterly winds into India fuels the heavy rainfalls during the summer monsoon.

The long-term averages for surface wind directions (arrows) and wind speeds (color-coded in meters per second) during January (left) and July (right). These maps show a far northward shift of the monsoon trough (thick dashed line) in July. I've drawn a large arrow on each image to give you a quick sense of the overall wind flow toward or away from India.
Credit: ESRL

The bottom line here is that the annual wind reversal over the Indian Ocean and surrounding land areas is the most spectacular seasonal wind shift on this planet. Nowhere else even comes close. India actually experiences a nearly complete reversal in wind direction between meteorological summer and winter (summer average wind vectors on the left; winter on the right). And, it's the large wind shift that defines the monsoon, not rainfall. The rainfall during the summer monsoon is merely an effect of the moist onshore flow, while the dry period in the winter corresponds to the dry offshore flow. But, the shift to dry winds in the winter is just as much a monsoon (the "winter monsoon") as the shift to moist winds and rainy weather in the summer (the "summer monsoon").

While definitive wind shifts define the monsoon, trends in rainfall help meteorologists keep track of the progress of the monsoon. You see, unlike routine land and sea breezes, which work pretty much like clockwork along the coast, the start and the end of the summer monsoon are not set in stone (the image below shows the average start (left) and end (right) dates). Obviously, definitive shifts in prevailing winds are pieces in the timing puzzle, but sharp increases in consecutive five-day rainfall totals mark the climatological onset date of the summer monsoon (and sharp decreases mark the withdrawal of the summer monsoon). Although the rains of the summer monsoon arrive over Myanmar in May, they do not envelop all of India until well into July. Note the "gradient" of late-May, early-June start dates over southern India. Here, the summer monsoon sometimes advances relatively fast and furious as it sweeps across the southern regions in a spectacular burst. Frequently, however, the onset of the monsoon is not spectacular, tempered by a gradual transition that starts with shifting winds, higher humidity, and subsequent light rains.

Like most things in life, the summer monsoon can be late or early arriving (and late or early leaving). Still these dates give weather forecasters timing guidelines. Regardless of the specifics of the onset of the summer monsoon in any given year, this progression explains why May tends to be the hottest month in India. The onset of the summer monsoon in June brings moist onshore flow, and more numerous showers and thunderstorms begin spreading across the country typically. Moist onshore flow and frequent showers and thunderstorms through the summer months tend to suppress temperatures a bit (it's still hot, but not quite as hot as May).

As mentioned previously, the rain that comes with the summer monsoon isn't constant (breaks in the rain can last a week or two at a time), and a significant portion of the rain that falls during the summer monsoon season is associated with monsoon depressions, which are low-pressure systems that form globally where ever monsoons occur. Monsoon depressions can be responsible for episodes of very heavy rain. For example, from June 10 to June 15, 2004, torrential rains associated with a monsoon depression deluged parts of eastern India. Estimated precipitation from satellite showed rainfall as high as 24 inches during this very wet period. Not surprisingly, such episodes of heavy rain can cause catastrophic flooding.

While the monsoon in India is the most dramatic on Earth, monsoons occur to varying degrees in other parts of the world. Perhaps you've heard weathercasters refer to a "monsoon" in the southwestern United States. By most standards, this North American Monsoon is minor compared to the monsoon in India and the rest of southeast Asia (the wind shift associated with the North American Monsoon is much more subtle). In fact, the wind shift is subtle enough that some scholars don't consider the North American Monsoon to be a "real" monsoon. Regardless, the moist summertime flow is sufficient to fuel slow-moving thunderstorms in the southwestern United States, which can cause serious flash flooding and damage. On August 19, 2003, for example, nearly stationary thunderstorms dumped as much as three inches of rain on Las Vegas, Nevada, in just 90 minutes, causing serious flooding. Unfortunately, flash flooding in Las Vegas is almost a sure bet during the summer monsoon season.

So, while the North American Monsoon pales in comparison to the summer monsoon of India and Southeast Asia, the impacts of the monsoon (details of local wet and dry seasons) are regional in scope. Up next, we'll take a look at a characteristic of tropical weather that has effects which ripple across the entire globe (even beyond the tropics). Read on!