In this section, we explore the predictions from GCMs regarding the temperature under different IPCC emissions scenarios described in the previous section. As part of the 2022 IPCC Assessment Report, all of the major GCM modeling groups around the world ran their models with the same Representative Concentration Pathways (RCPs) and emissions scenario families (A2, A1B, and B1) in order to provide the best estimate of what the future climate might look like under these scenarios. Each model is different, and so their results are also different. The figure below gives a sense of how much variability and similarity there is in these models. Remember that climate scientists believe that it is key that we maintain the warming below 2oC; above that level the consequences, including drought, heatwaves, melting of ice sheets, could be dire. 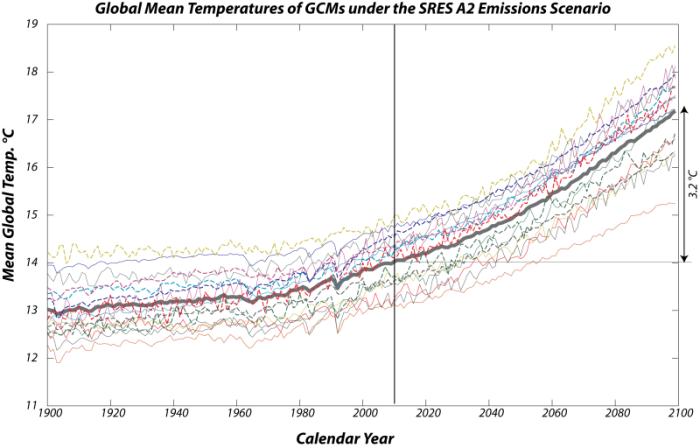 Each of the thin colored lines represents the output from a different GCM — here we see the average global temperature through time, starting in 1900 and going until 2099, using the SRES A2 scenario, which is the one we sometimes call "business as usual." There is obviously a big spread in the results, but they all have more or less the same general form and a similar range (the difference between the minimum and maximum temperatures). The thicker gray line is the mean from all these models, and we can see that by the end of the century, the mean rises by about 3.2 °C above the present temperature — this is roughly three times the warming we have experienced in the last century (about 1.1oC).

The differences in these curves reflect, among other things, different starting conditions, and if we force them to all have the same temperature today, the similarities are more apparent: 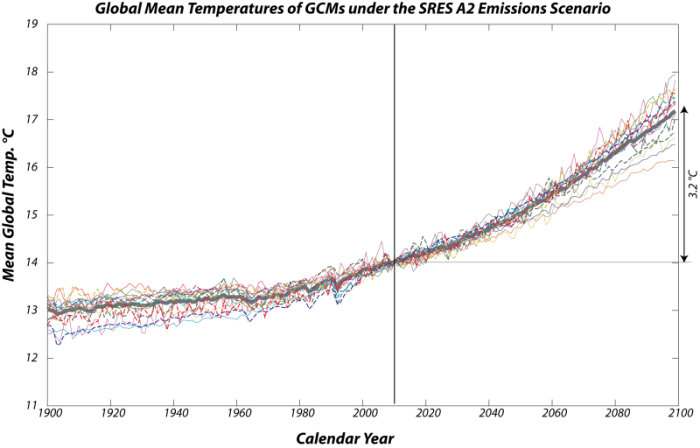 This view gives a sense of how much the models differ in their relative temperature changes over the next century. You can see that by the end of the century, the spread of temperatures is a bit less than 2°C, but most of the models fall within a half a degree from the mean temperature — the thick gray line. As we have discussed this mean warming of 3.2 °C would be disastrous for the planet.

The lesson here is that the similarities in the models are far more important than their differences and that they forecast a significant temperature rise by the end of the century as we essentially continue with our emissions of carbon into the atmosphere. 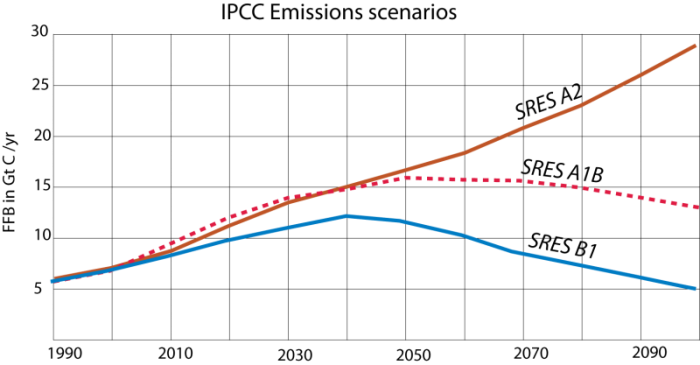 Here are the corresponding global temperature histories from the collection of models for these different scenarios: 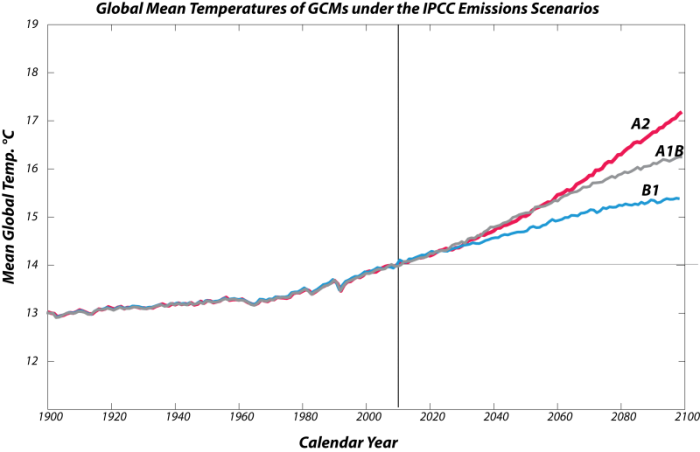 As expected, the A2 scenario results in the highest temperature rise, followed by the A1B and the B1 scenarios. Remember that the A1B scenario represents a pretty optimistic view of how we will react to the challenge of climate change, but even in that case, the temperature rises by about 2.3 °C in the next century, which is above the Paris 2.0oC target. And even in the dramatic reduction in emissions envisioned in the B1 scenario, the temperature still rises by about 1.4°C — greater than what we’ve experienced in the last century. The lesson here is that we need to be prepared for continued climate change even if we take steps to limit carbon emissions into the atmosphere. And note that only B1 keeps us below the catastrophic 2.0oC threshold discussed earlier.

Next, we turn to the really interesting aspect of the GCM results, which are the spatial patterns of climate change. Why is this so interesting and important? The reason is that what really matters to us is how the climate changes in key areas -- areas that will affect sea level through melting of glacial ice, areas where people are concentrated, and areas where we produce food to feed ourselves. Remember that the climate of the Earth is highly variable, and if we talk about a global temperature rise of 3.2 °C, we have to remember that the temperature will rise more than that in some places (such as the polar regions) and less than that in the tropics.

We begin with a look at the climate of the future as predicted by the NCAR (National Center for Atmospheric Research in Boulder, Colorado) model — this model seems to often fall close to the mean of all the other models. 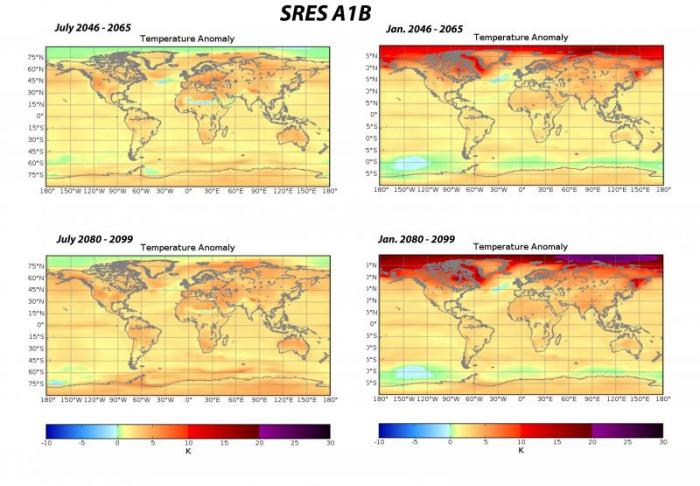 Here, we see 4 views of the surface temperature anomaly relative to the 1960-1990 mean. The upper 2 panels represent the mean temperature anomaly for the 20 year period from 2046 to 2065 in the month of July on the left and January on the right. In the lower 2 panels we see similar views for the 20 year period from 2080 to 2099. The color scale below is for all of the panels and shows the anomaly in °K, but you can also think of this as °C.

Let’s start with the mid-century forecast. It calls for moderate warming in the range of 2 °C relative to the 1960-1990 mean. For both months, the warming is slightly higher on land than in the oceans, and there are a couple of spots of cooling: at the southern edge of the Sahara, one in the southern ocean around Antarctica, and one in the North Atlantic. The striking feature of this model result is the big change in the high latitudes of the northern hemisphere in January, where a large region will experience much warmer winter temperatures — up to 10° C warmer. The changes are even more dramatic for the end of the century, with the northern winters warming by up to 20° C above the 1960-1990 mean! This clearly spells the end of polar ice, which already is at its lowest extent ever. Notice also that much of Canada and Siberia warm by up to 10° C; this has important implications for the reduction in permafrost, which will increase the flow of carbon into the atmosphere via positive feedback (more on this in the next module).

The pattern of warm winters is important for a number of reasons. For one thing, it means that there will be less growth of ice in glaciers during the time of the year that they accumulate ice; thus they will shrink faster and sea level will rise at a higher rate. Another unexpected result of warmer winters is increased problems from some insect pests whose populations normally are greatly reduced by cold winters, and when it does not get cold enough in the winter, they expand their range and cause greater damage. This is already happening in the western US with the pine bark beetle, whose population has exploded in recent years, leading to the decimation of large forested areas. These dead pine trees are then fuel for large forest fires whose scale exceeds fires in the historical record.

For comparison, we now compare the end-of-century forecast for the other 2 scenarios, A2, which is our business as usual case, and B1, which is our optimistic case with the A1B forecast.

First, we have the A2 scenario, which leads to the highest warming:

Projected January and July Warming for Future Decades Compared to the 1960-1990 mean for Scenario A2 and A1B
Credit: David Bice © Penn State University is licensed under CC BY-NC-SA 4.0

For July, this scenario leads to warming of the continents that is between 5 and 10° C — very little of the US would escape warming in excess of about 6° C; the same is true for much of Europe. Winter shows an even more dramatic warming, with vast regions warming by more than 20 °C. A2 would result in a major increase in the number of days over 90o F in places such as Atlanta and Austin, literally half of the days of the year would exceed that level of discomfort. And polar ice would melt much faster than in A1B or B1.

Now, for the other extreme, the B1 scenario at the end of the century:

Projected January and July Warming for Future Decades Compared to the 1960-1990 mean under Scenario B1
Credit: David Bice © Penn State University is licensed under CC BY-NC-SA 4.0

As expected, the warming is far less dramatic, but still shows an impressive warming at the high latitudes of the northern hemisphere in the winter months. But, for most of the land areas, where people are concentrated and where we grow a lot of our food, the climate changes generally do not exceed a warming of 2°C.

These comparisons demonstrate the importance of reducing emissions to scenario B1 levels.

‹ Highlights of GCM Predictions up Precipitation ›