The Paris Accord is a really big deal. This global climate agreement brokered by the United Nations and signed in December 2015 by some 195 countries went into effect in October 2016. A key goal of the accord is for all member countries to reduce greenhouse gas emissions to keep global temperature rise below 2o C of pre-industrial levels (measured in 1880). This is a threshold level above which most scientists agree that the impacts of climate change will be catastrophic, including flooding of large coastal cities by sea level rise, brutal heat waves, and droughts that could cause widespread starvation in developing countries. The agreement also lays the groundwork for countries to strive to reduce emissions to keep temperature increase below 1.5o C or 2o C.   1.5o C is considered to be the best case scenario given that we are currently at 1.1o C above 1880 levels and it would need very drastic emissons cuts very quickly.  Above 1.5o C low lying island nations in the Pacific and Indian Oceans would likely end up underwater. The agreement also acknowledges that 2o C is a more likely warming target.  As we've seen before this is a significant amount of warming but much more favorable than the 3 or 4o C which would produce catastrophic climate effects. 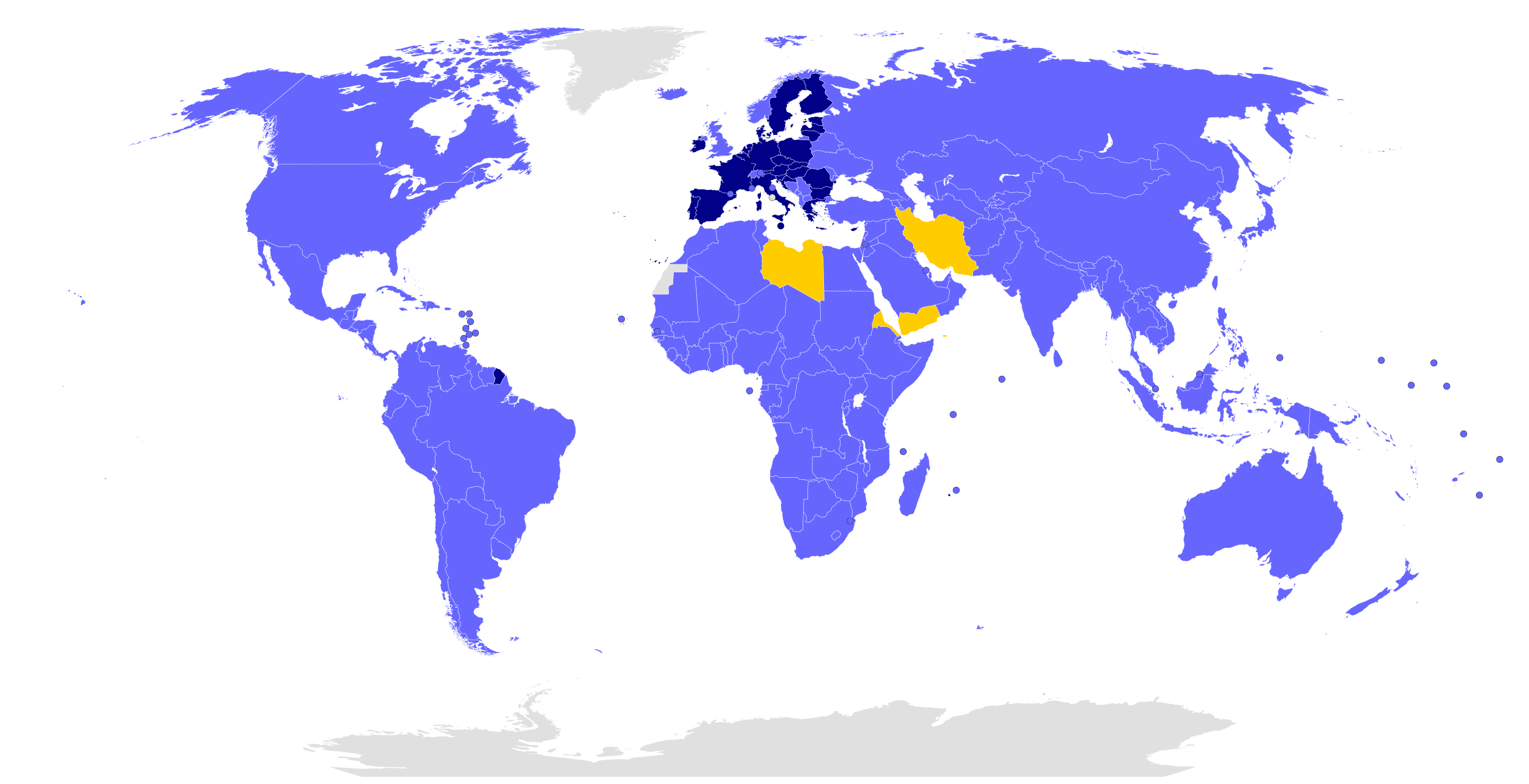 Parties and signatories of the Paris Climate Agreement
Credit: Paris Agreement by L.tak from Wikipedia is licensed under CC BY-SA 4.0

There have been numerous previous climate agreements in the past, most notably the 1997 Kyoto Protocol that laid out stringent emissions targets for the countries that signed on. One of the reasons the Paris Accord was adopted by so many nations (only Syria and Nicaragua did not sign initially, but both now have) is because the impacts of climate change are becoming increasingly urgent. Although 127 countries signed on to Kyoto, the US did not.

The second reason the accord was so widely adopted is that the emission targets are voluntary, set by the individual countries based on what they believe is feasible. For example, the US’s goal was to reduce emissions by 26 percent by 2025. Once a country sets its target, it is required to abide by it and present supporting monitoring data. A country can change targets every five years. The downside of the flexibility is that many experts believe that with current targets, 1.5o C is impossible, 2o C is highly unlikely and 3o C is more realistic. So, countries will have to reduce emissions radically and rapidly to stave off the highly adverse impacts of climate change.

Two other key provisions of the Paris Accord is that richer developed countries have made a financial commitment to help poorer developing nations meet their targets, although there were no firm amounts in the agreement. President Obama pledged $2.5 billion to this fund while he was in office, but only $500 million was paid. Another key provision is that the agreement recognizes and addresses deforestation as a key element of emission reduction and for countries to use forest management strategies as part of their emissions goals. In fact at the climate summit in 2021, 100 countries including Brazil where deforestation has been particularly devastating, agreed to stop deforestation entirely by 2030, which would be a major step forward.

For the US, one of the key components of the emissions reduction strategies was the Clean Power Plan, introduced in 2014 under President Obama. The CPP set out to reduce emissions from electrical power generation by 32% based on the reduction of emissions from coal-fired power plants and the conversion to renewable sources of energy including wind, solar, and geothermal.

However, that said, this is by far the most widely adopted agreement and the global scope is a massive accomplishment. So, it was a major disappointment on June 1st, 2017 when President Donald Trump signaled that the US would withdraw from the Paris Accord in 2020, the earliest time the US could pull out under the agreement guidelines. The fear is that if the US, the second largest producer of carbon, does not abide by its emissions goals, other countries might not as well. Trump's reasons were largely economic, that the conversion to renewable energy would be too expensive and hinder the bottom line of businesses, especially the fossil fuel industries. However, as we will see in this class, conversion to renewables has begun and has the potential to be a very large and highly profitable business. Moreover, cities, states, and businesses themselves, especially those in the northwest and on the west coast are already committed to reducing emissions, so at least part of the US will continue to collaborate with other countries to address the critical issue of climate change.

Trump's overall strategy involves defunding and repealing the Clean Power Plan which happened in 2019.  It was replaced by the Affordable Clean Energy Rule which was invalidated by the courts in 2021.

Fortunately for climate at least President Biden reentered the Paris Agreement on 19 February 2021 and has set even more ambitious US emissions targets than those originally agreed upon. He has signed several executive orders relating to clean energy and the pending Build Back Better legislation has billions of dollars to help individuals, communities and industries switch to renewable energy, but this legislation has stalled in early 2022, and, without it, the US is not on track to meet its Paris targets.

We will refer to the Paris Agreement in the remainder of the course. In this module, we discuss how models simulate the climate of the future. In closing, remember the 2oC number, it's going to come up over and over again.