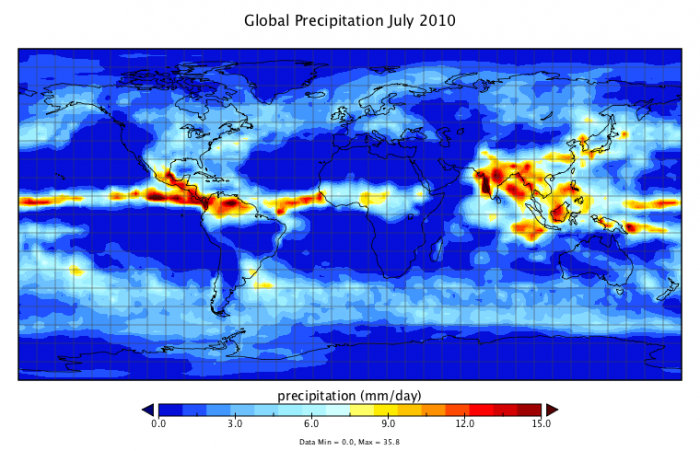 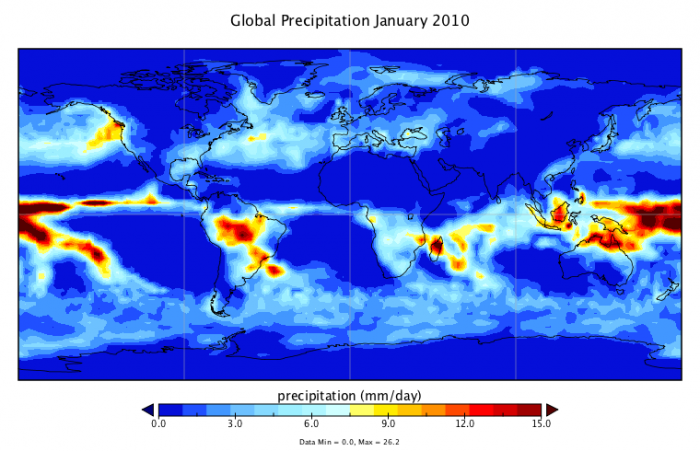 Here, red is used to show high rainfall, and blue is used to show low rainfall. The precipitation rates here are shown in terms of millimeters of rain per day (the high value here of 15 mm/day is about 0.6 inches/day). In the eastern US, for instance, the July rainfall is about 1 mm/day.

Looking into the future, we will again utilize the results from the NCAR model, looking at 20-yr. means from the climate model results to get a smoothed out version of the results. We focus here on the SRES A1B scenario, looking at the months of July and January. 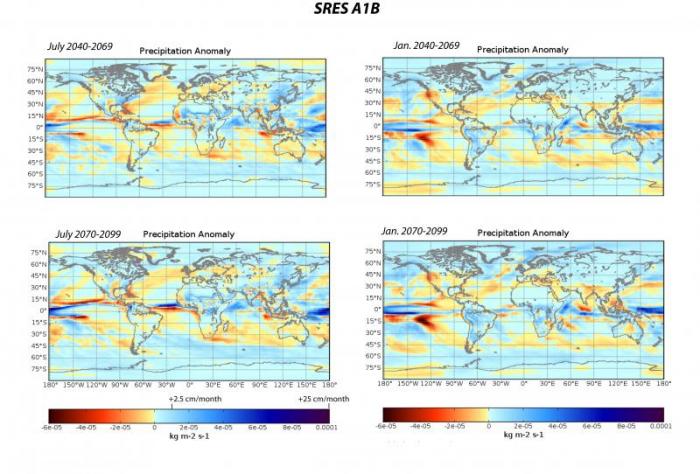 The units here are a bit odd — kilograms per meter squared per second — but it is still a rate, and if we do a conversion, we find that 0.0001 of these units equals 25 centimeters per month, or a bit less than one centimeter per day, which is 10 millimeters per day. Have a look at the map for July of 2040 to 2069. In the eastern US, the precipitation anomaly is about 2e-5 kg/m2s. At first, it is difficult to get a sense of whether this is important. This anomaly translates to about 45 mm/month, or about 1.5 mm/day. From the July 2001-December 2019 map above, we see that the typical rate for July in this region is on the order of about 4-5 mm/day, so an increase of 1.5 mm/day is about a 30% increase — fairly significant.

Interestingly, there is not much of a change in the anomaly for this region (eastern US) as we move to the end-of-the-century map in the lower left panel above. And in both cases, the western US is drier by a bit. If we look at the January maps, we see a bigger change between the two time periods, getting drier by the 2080-2099 period. For January, it is important to note that in the Western US, the precipitation is decreased; this could mean problems for the water supply out west, where the winter snows, as they melt in the summer, represent a major part of the water budget.

What about the other scenarios? Below, we see the precipitation anomaly maps for the A2 scenario — the one that leads to a hotter climate — for the 2080-2099 time period.

Projected change in precipitation for 2080-2099 compared to today under emission scenario A2
Credit: David Bice © Penn State University is licensed under CC BY-NC-SA 4.0

Compared to the A1B scenario for the same time period, we see a generally drier picture for the US, though the differences are actually quite small. Note that in this scenario, as in others, the tropics get wetter.

For scenario SRES B1, the one where the temperature at the end of the century is only slightly higher than the present, the precipitation changes are generally quite small, as can be seen in the map below: 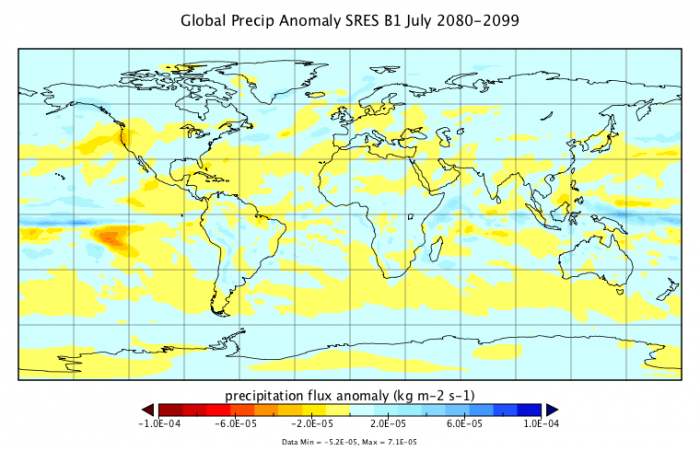 Projected change in precipitation for 2080-2099 compared to today under emission scenario B1
Credit: David Bice © Penn State University is licensed under CC BY-NC-SA 4.0

Here, the very light colors indicate slight increases and decreases in the precipitation rate for July — the same picture holds for January as well.

In summary, the precipitation results indicate that in general, there are very complicated patterns of precipitation change, and for much of the globe, they are quite minimal. The model predicts that there will be wetter areas and drier areas, and what really matters is how these changes correlate with the regions where people live and grow their food. Under the A2 scenario (business-as-usual), we should expect a generally drier western and south-central US and a generally wetter northeastern U.S. We will revisit this issue in Module 8.