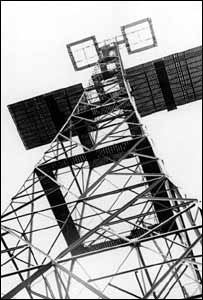 As mentioned, many of the systems were terrestrial. And, of course, RADAR (RAdio Detecting And Ranging) in its earliest configuration was one of those. During World War II, it was a powerful tool. Long before the satellite era, the developers of RADAR were working out many of the concepts and terms still used in electronic positioning today. For example, the classification of the radio portion of the electromagnetic spectrum by letters, such as the L-band used in naming the GPS carriers, was introduced during World War II to maintain military secrecy about the new technology. 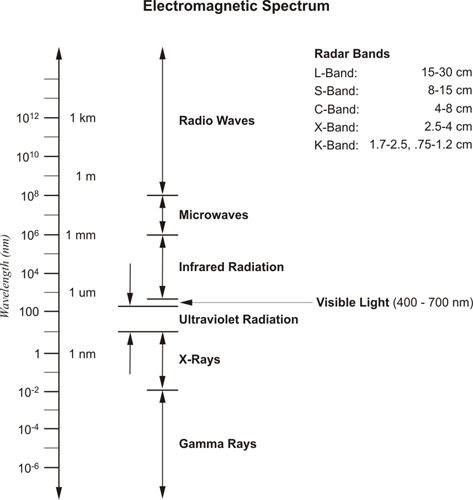 Above is a chart of a portion of the electromagnetic spectrum. Visible light is a very small range in the middle. Microwaves—which is the area where the RADAR bands live—is considerably outside the visible range.

The 23cm wavelength that was originally used for search radar was given the L designation because it was long compared to the shorter 10cm wavelengths introduced later. The L band wavelengths are 15 to 30 centimeters. So, when we say L band, we're referring to this identification system. The GPS carriers with wavelengths in the neighborhood of 20 centimeters fit well within that context. The shorter wavelength was called S-band, the S for short. The S band—s for short—8 to 15 centimeters. But the Germans used even shorter wavelengths of 1.5cm. They were called K-band, for kurtz, meaning short in German. Wavelengths that were neither long nor short were given the letter C, for compromise, and P-band, for previous, was used to refer to the very first meter-length wavelengths used in RADAR. There is also an X-band radar used in fire-control radars and other applications. In any case, the concept of measuring distance with electromagnetic signals (ranging in GPS) had one of its earliest practical applications in RADAR. Since then, there have been several incarnations of the idea. 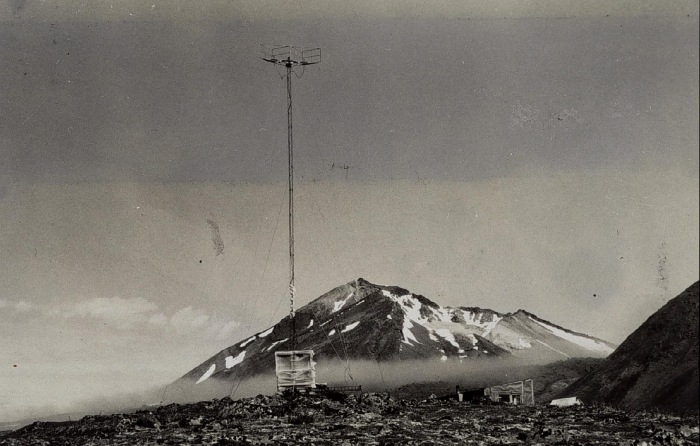 Shoran (SHOrt RAnge Navigation), a method of electronic ranging using pulsed 300 MHz VHF (very-high-frequency) signals, was designed for bomber navigation, but was later adapted to more benign uses. The system depended on a signal, sent by a mobile transmitter-receiver-indicator unit being returned to it by a fixed transponder. The elapsed time of the round trip was then converted into distances. It was not long before the method was adapted for use in surveying. Using Shoran from 1949 to 1957, Canadian geodesists were able to achieve precisions as high as 1:56,000 on lines of several hundred kilometers. The ability to measure distances of this magnitude was extraordinary in those times. Shoran was used in hydrographic surveys in 1945 by the United States Coast and Geodetic Survey. In 1951, Shoran was used to locate islands off Alaska in the Bering Sea that were beyond positioning by visual means. Also in the early 1950s, the U.S. Air Force created a Shoran measured trilateration net between Florida and Puerto Rico that was continued on to Trinidad and South America. Trilateration is a familiar term now as it has come up again in GPS—positioning based upon distances. However, it's worthwhile to note that Shoran and the related technologies, Loran and Hiran, are terrestrial based.

Shoran’s success led to the development of Hiran (high-precision Shoran). Hiran’s pulsed signal was more focused, its amplitude more precise, and its phase measurements more accurate. Hiran was also applied to geodesy. It was used to make the first connection between Africa, Crete, and Rhodes in 1943. But its most spectacular application were the arcs of triangulation joining the North American Datum (1927) with the European Datum (1950) in the early 1950s. By knitting together continental datums, Hiran surveying might be considered to be the first practical step toward positioning on a truly global scale. 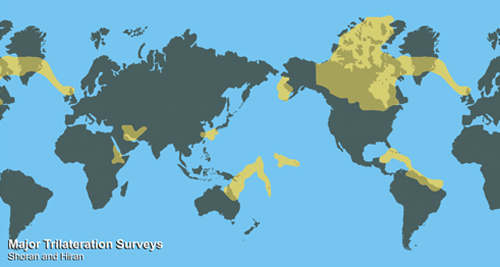 Hiran surveying was really the first intercontinental system. As you can see in this graphic, it was used to connect datums across the oceans. This had never been done before. It was especially remarkable given that this was a terrestrial system. Up until we started thinking in global terms, there was really no reason to consider that a worldwide foundation of measurement was needed. Today, it is usual to think of the whole planet, and we expect measurements to be consistent around the Earth. However, before intercontinental connections were made, that idea wasn't necessary or taken seriously. So, one of the forerunners of GPS is simply the mindset of thinking in terms of a global datum (reference frame).