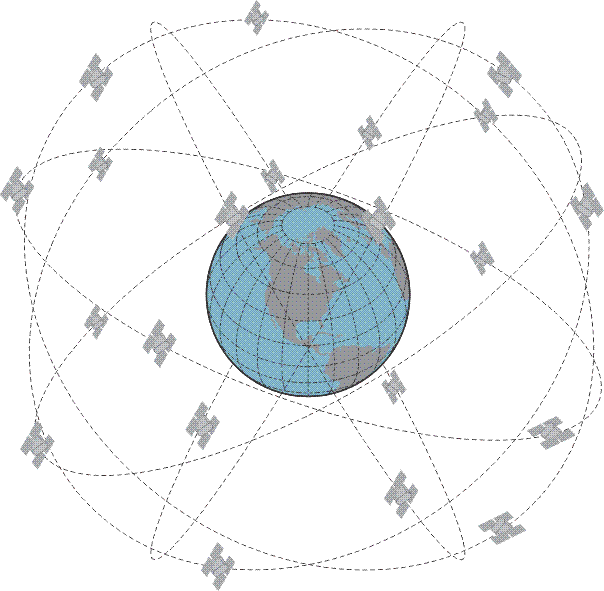 GPS improved on some of the shortcomings of the previous systems. For example, the GPS satellites were placed in nearly circular orbits over 20,000 km above the earth where the consequences of gravity and atmospheric drag are much less severe than the lower orbits assigned to TRANSIT, Timation, and some of the other earlier systems used. GPS satellites broadcast higher frequency signals which reduce the ionospheric delay. The rubidium and cesium clocks pioneered in the Timation program and built into GPS satellites were a marked improvement over the quartz oscillators that were used in TRANSIT and other early satellite navigation systems. System 621B could achieve positional accuracies of approximately 16 meters. TRANSIT’s shortcomings restricted the practical accuracy of the system too. It could achieve submeter work, but only after long occupations on a station (at least a day) augmented by the use of a precise ephemerides for the satellites in post processing. GPS provides much more accurate positions in a much shorter time than any of its predecessors, but these improvements were only accomplished by standing on the shoulders of the technologies that have gone before.

The genesis of GPS was military. It grew out of the congressional mandate issued to the Departments of Defense and Transportation to consolidate the myriad of navigation systems. Its application to civilian surveying was not part of the original design. In 1973, the DOD directed the Joint Program Office (JPO) in Los Angeles to establish the GPS system. Specifically, JPO was asked to create a system with high accuracy and continuous availability in real time that could provide virtually instantaneous positions to both stationary and moving receivers in three dimensions. The forerunners could not supply all these features. The challenge was to bring them all together in one system.

Worldwide coverage and positioning on a common coordinate grid were required of the new system—a combination that had been difficult, if not impossible, with terrestrial-based systems. It was to be a passive system, which ruled out any transmissions from the users, as had been tried with some previous satellite systems. The user could not be required to reveal their position when they used the system, so obviously broadcasting a signal was out of the question. The signal was also to be secure and resistant to jamming, so codes in the satellite’s broadcasts would need to be complex and the GPS carriers spread-spectrum (wide).

The specification for the GPS system required all-weather performance and correction for ionospheric propagation delay. TRANSIT had shown what could be accomplished with a dual-frequency transmission from the satellites, but it had also proved that a higher frequency was needed. The GPS signal needed to be secure and resistant to both jamming and multipath. A spread spectrum, meaning spreading the frequency over a band wider than the minimum required for the information it carries, helped on all counts. This wider band also provided ample space for pseudorandom noise encoding, a fairly new development at the time. The PRN codes like those used in System 621B allowed the GPS receiver to acquire signals from several satellites simultaneously and still distinguish them from one another.

The U.S. Department of Defense (DOD) also wanted the new system to be free from the sort of ambiguity problems that had plagued OMEGA and other radar systems. And DOD did not want the new system to require large expensive equipment like the optical systems. Finally, frequency allocation was a consideration. The replacement of existing systems would take time, and with so many demands on the available radio spectrum, it was going to be hard to find frequencies for GPS.

Not only did the specifications for GPS evolve from the experience with earlier positioning systems, so did much of the knowledge needed to satisfy them. Providing 24- hour real-time, high-accuracy navigation for moving vehicles in three dimensions was a tall order. Experience showed part of the answer was a signal that was capable of carrying a large amount of information efficiently and that required a large bandwidth especially since the system needed to be passive. So, the GPS signal was given a double-sided 10-MHz bandwidth. But that was still not enough, so the idea of simultaneous observation of several satellites was also incorporated into the GPS system to accommodate the requirement. Unlike some of its predecessors, GPS needed to have not one, but at least four satellites above an observer's horizon for adequate positioning. Even more, if possible. And the achievement of full-time worldwide GPS coverage would require this condition be satisfied at all times, anywhere on or near the earth. That decision had far-reaching implications.

The objective, of course, was to build the perfect system. And whether or not that's been achieved, there are several of the specifications that have been met rather well with GPS. It's a passive system—there's no need to broadcast any signals. It can be denied—it can be turned off—when the Department of Defense so desires. It's resistant to counter measures, meaning—spoofing, for example, is a term used to indicate the idea that a bad guy could broadcast a signal that appears to be a GPS signal to try to confuse the receivers.

It works in real time. It should be applicable to joint and combined operations, militarily speaking. And it should be able to work on common grids that are appropriate for all users. This is very true. One of the things that GPS is very good at is taking its native format—in Earth-Centered, Earth-Fixed XYZ coordinates—and transforming them using the microprocessor and the receiver to virtually any well-defined coordinate system. The positional accuracy should not be degraded by changes in altitude nor by the time of the year—time of day or year. Yes, GPS works well at the top of the mountain and down in the valley—well, except for multipath to some degree. And operating personnel should be capable of maintaining the system. It should not be dependent on externally-generated signals. Of course, that's true—the signals come directly from the satellites. It should not have decreasing accuracy over time and distance traveled. GPS has been extraordinarily effective on measuring very long baselines. It's all a pretty tall order, but GPS has lived up to most of it.