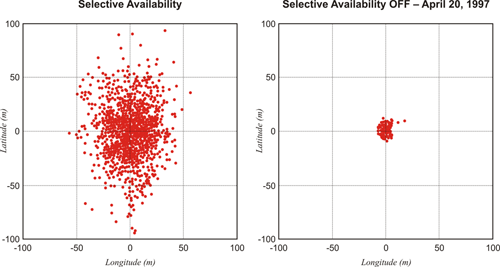 Comparison of Positions With and Without Selective Availability 12 Hour Data Set
Source: GPS.gov

As mentioned earlier, application to civilian surveying was not part of the original concept of GPS. The civilian use of GPS grew up through partnerships between various public, private, and academic organizations. Nevertheless, while the military was still testing its first receivers, GPS was already in use by civilians. Geodetic surveys were actually underway with commercially available receivers early in the 1980s.

The Federal Radionavigation Plan of 1984, a biennial document including official policies regarding radionavigation set the predictable and repeatable accuracy of civil and commercial use of GPS at 100 meters horizontally and 156 meters vertically. This specification meant that the C/A code ranging for Standard Positioning Service could be defined by a horizontal circle with a radius of 100 meters, 95% of the time. GPS was decidedly a Defense Department system. However, it became apparent early on that civilian receivers were doing much better than 100 meters horizontally. Selective Availability, a dithering of the clocks in the GPS satellite, was instituted. When the clocks in the satellite (the oscillators) don't keep their rate to a steady standard, then the positioning derived from them suffers. In this way, Selective Availability intentionally degraded the accuracy available to the civilian C/A code users to the 100 meter horizontally for quite a long time.

Selective Availability was switched off May 2, 2000. It is not a consideration at the moment, but it could be switched back on. I must mention that since surveyors traditionally worked with the carrier phase observable to achieve high accuracy, therefore the dithering of the pseudorange codes which was the characteristic of SA didn't affect surveying positioning. However, for those who used pseudorange (code-phase) receivers primarily, Selective Availability was a problem. Since it has been switched off, of course, the accuracy of those sorts of receivers has improved markedly. 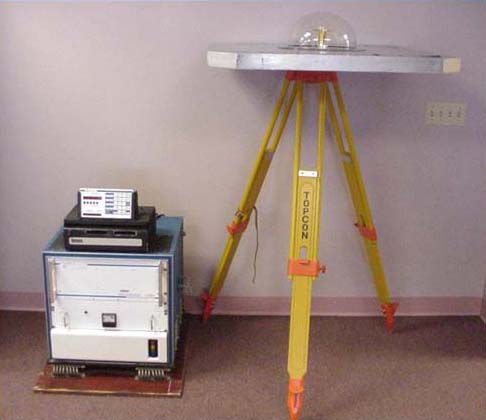 By using interferometry, the technique that had worked so well with Prime Minitrack and VLBI, civilian users were showing that GPS surveying was capable of extraordinary results. In the summer of 1982, a research group at the Massachusetts Institute of Technology (MIT) tested an early GPS receiver and achieved accuracies of 1 and 2 ppm of the station separation. Over a period of several years, extensive testing that confirmed and improved on these results was conducted around the world. In 1984, a GPS network was produced to control the construction of the Stanford Linear Accelerator. This GPS network provided accuracy at the millimeter level. In other words, by using the differentially corrected carrier phase observable instead of code ranging, private firms and researchers were going far beyond the accuracies the U.S. Government expected to be available to civilian users of GPS.

The interferometric solutions made possible by computerized processing developed with earlier extraterrestrial systems were applied to GPS by the first commercial users. The combination made the accuracy of GPS its most impressive characteristic, but it hardly solved every problem. For many years, the system was restricted by the shortage of satellites as the constellation slowly grew. The necessity of having four satellites above the horizon restricted the available observation sessions to a few, sometimes inconvenient, windows of time. Another drawback of GPS for the civilian user was the cost and the limited application of both the hardware and the software. GPS was too expensive and too inconvenient for everyday use, but the accuracy of GPS surveying was already extraordinary in the beginning.

The photo is of an old friend of mine. This was the first commercial GPS receiver, the Macrometer. It was an interferometric receiver. You see here the receiver itself on the floor next to the tripod. It was rather heavy. It took two people to carry it. We transported them in utility vehicles adapted for the purpose. Each Macrometer observed the GPS constellation simultaneously with the other Macrometers. This is the concept we discussed as resulting in relative positioning. Relative positioning requires receivers operating simultaneously. With the Macrometer, unlike current GPS receivers, they had to be brought together and their clocks synced. In other words, the several receivers were cabled together and their oscillators synced with each other. This had to be done to discover the receiver clock drift that occurred during the mission. It was necessary because the Macrometer was a codeless receiver. It did not have access to the Navigation Message. That meant that the broadcast clock correction and all of the other bias mitigating information in the Navigation Message were unavailable to this particular receiver. All of that had to be done in the post processing phase.

The antenna of the Macrometer was a meter square of aluminum. You can see the plexiglass dome with a dipole antenna on the underneath of it. And of course, the antenna was cabled to the receiver. You can see the black tape drives on the top of the receiver. We used tapes to record the observations. The system ran on 110 volts. So, we had to carry generators with us. It was quite a beefy system to carry around and quite expensive. Nevertheless, it worked rather well. It was possible to achieve one to two parts per million of the station separation, which was much more accurate than the 100 meter spec we were talking about earlier. This was possible because the system utilized the carrier phase—aka the carrier beat phase—observable. GPS achieved extraordinary accuracy from the very beginning, from the very first commercial GPS receiver. I was proud to be part of it. 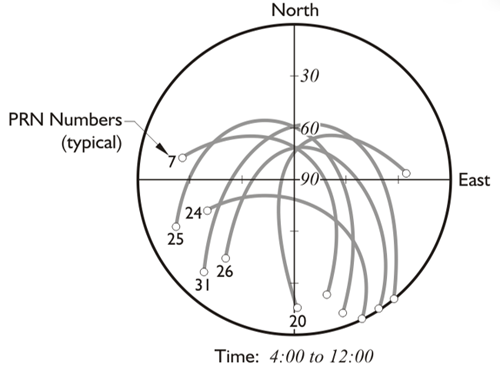 Today, with a mask angle of 10°, there are some periods when 15 or more GNSS satellites are above the horizon. And GPS receivers have grown from only a handful to the huge variety of receivers available today. Some push the envelope to achieve ever-higher accuracy; others offer less sophistication and lower cost. The civilian user’s options are broader with GPS than any previous satellite positioning system—so broad that, as originally planned, GPS will likely replace more of its predecessors in both the military and civilian arenas. In fact, GPS has developed into a system that has more civilian applications and users than military ones. But the extraordinary range of GPS equipment and software requires the user to be familiar with an ever-expanding body of knowledge including the Global Navigation Satellite System (GNSS). GNSS includes both GPS and satellite navigation systems built by other nations and will present new options for users. However, the three segments of GPS will be presented before elaborating on GNSS.

Continuing on with the civilian point of view, which, of course, is our primary focus; today, with a mask angle of 10 degrees, it's possible to have up to 10 satellites above the horizon. Of course, when we first started, we were very happy when we were able to have four. So, it's obvious that as time goes on, the cost of the receivers keeps going down and their sophistication going up. And GPS, clearly, has been replacing its predecessors in both the military and civilian arenas. In fact, GPS has developed into a system that has more civilian applications and users than military ones. It's really a remarkable story of how rapidly the system has realized its potential.

‹ NAVSTAR GPS up The Space Segment ›