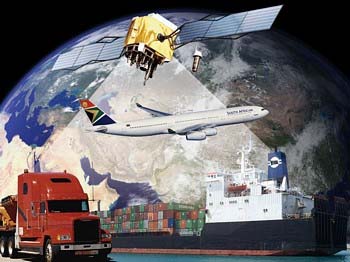 In the early years of GPS, the military concentrated on testing navigation receivers. But civilians got involved much sooner than expected and took a different direction: receivers with geodetic accuracy. Some of the first GPS receivers in commercial use were single frequency, six channel, and codeless instruments. Their measurements were based on interferometry. As early as the 1980s, those receivers could measure short baselines to high accuracy and long baselines to 1 ppm. It is true the equipment was cumbersome, expensive, and, without access to the Navigation message, dependent on external sources for clock and ephemeris information. They were the first at work in the field commercially. During the same era, a parallel trend was underway. The idea was to develop a more portable, dual-frequency, four-channel receiver that could use the Navigation message. Such an instrument did not need external sources for clock and ephemeris information and could be more self-contained. Unlike the original codeless receivers that required all units on a survey brought together and their clocks synchronized twice a day, these receivers could operate independently. And while the codeless receivers needed to have satellite ephemeris information downloaded before their observations could begin, this receiver could derive its ephemeris directly from the satellite’s signal. Despite these advantages, the instruments developed on this model still weighed more than 40 pounds, were very expensive.  A few years later, a different kind of multichannel receiver appeared. Instead of using the L1 and L2 frequencies, it depended on L1 alone. And on that single frequency, it tracked the C/A code and also measured the carrier phase observable. This type of receiver established the basic design for the many of the GPS receivers in use today. They are multichannel receivers, and they can recover all of the components of the L1 signal. The C/A code is used to establish the signal lock and initialize the tracking loop. Then, the receiver not only reconstructs the carrier wave, it also extracts the satellite clock correction, ephemeris, and other information from the Navigation message. Such receivers are capable of measuring pseudoranges, along with the carrier phase and integrated Doppler observables. Still, as some of the earlier instruments illustrated, the dual-frequency approach does offer significant advantages. It can be used to limit the effects of ionospheric delay, it can increase the reliability of the results over long baselines, and it certainly increases the scope of GPS procedures available to a surveyor. For these reasons, a substantial number of receivers utilize both frequencies. Dual or multi frequency receivers are the standard for geodetic applications of GPS.

The military planned, built and continues to maintain GPS. It is, therefore, no surprise that large component of the user segment of the system is military. While surveyors and geodesists have the distinction of being among the first civilians to incorporate GPS into their practice and are sophisticated users, their number is limited. In fact, it is quite small compared with explosion of applications the technology has now among the general public. The use of GPS in positioning, navigation and timing (PNT) applications in precision agriculture, machine control, aviation, railroads, finance, autonomous vehicles and the marine industry is ubiquitous. With GPS incorporated into smart phones and navigation systems, it is no exaggeration that GPS technology has transformed civilian businesses and lifestyles around the world. The uses the general public finds for GPS will undoubtedly continue to grow as the cost and size of the receivers continues to shrink.

Since it was instituted, GPS has become a utility. The user segment is growing so dramatically it's hard to conceptualize it. It will continue and be augmented by GNSS, which we'll talk more about in the upcoming lessons.

‹ Kalman Filtering up Discussion and Quiz ›