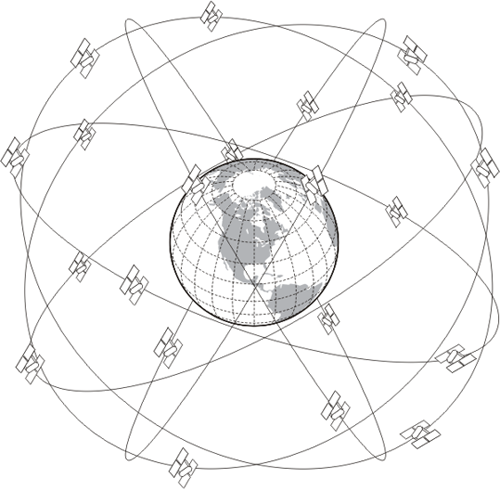 Though there has been some evolution in the arrangement, the current GPS constellation under full operational capability consists of 24 satellites. However, there are more satellites than that in orbit and broadcasting at any given time, and the constellation includes several orbital spares.

As the primary satellites aged and their failure was possible, spares were launched. One reason for the arrangement was to maintain the 24 satellite constellation without interruption.

It was also done to ensure that it is possible to keep four satellites, one in each of the four slots in the six orbital planes. Each of these planes is inclined to the equator by 55° in a symmetrical, uniform arrangement. Such a uniform design does cover the globe completely, even though the coverage is not quite as robust at high latitudes as it is at midlatitudes. The uniform design also means that multiple satellite coverage is available even if a few satellites were to fail. The satellites routinely outlast their anticipated design lives, but they are eventually worn out.

The Space Segment includes the satellites themselves. Since each satellite is nearly three times the earth’s radius above the surface, its orbital period is 12 sidereal hours. The sidereal (star time) time scale is different from Mean Solar Time (the normal time scale on which we operate) and different from UTC

4 minute difference. When an observer actually performs a GPS survey project, one of the most noticeable aspects of a satellite’s motion is that it returns to the same position in the sky about 4 minutes (3 minutes and 56 seconds) earlier each day in our usual Mean Solar Time. This apparent regression is attributable to the difference between 24 solar hours and 24 sidereal hours. This rather esoteric fact has practical applications; for example, if the satellites are in a particularly favorable configuration for measurement, the observer may wish to take advantage of the same arrangement the following day. However, he or she would be well advised to remember the same configuration will occur about 4 minutes earlier on the solar time scale. Both Universal Time (UT) and GPS time are measured in solar, not sidereal units. It is possible that the satellites will be pushed 50 km higher in the future to remove their current 4-minute regression, but, for now, it remains. As mentioned earlier, the GPS constellation was designed to satisfy several critical concerns. Among them were the best possible coverage of the earth with the fewest number of satellites, the reduction of the effects of gravitational and atmospheric drag, sufficient upload, monitoring capability, and the achievement of maximum accuracy.

‹ GPS up The Space Segment: Dilution of Precision ›