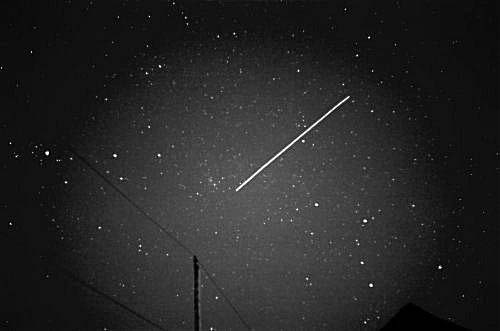 Some of the earliest extraterrestrial positioning was done with optical systems. Optical tracking of satellites is a logical extension of astronomy. The astronomic determination of a position on the earth’s surface from star observations, certainly the oldest method, is actually very similar to extrapolating the position of a satellite from a photograph of it crossing the night sky. In fact, the astronomical coordinates, right ascension α and declination δ, of such a satellite image are calculated from the background of fixed stars.

Here's a picture of a track of the International Space Station against the so-called fixed stars. Of course, it is possible to determine the position of a satellite in this way because the stars have known coordinates in the right ascension and declination system. And so, if one knows the time and knows the stars in the background, it is quite possible to learn the ephemeris—or the position—of the satellite based upon that control. This is an extension of astronomy that has been used—and to some extent continues to be used—in terms of positioning the satellites. For example, it's worth noting that some of the major remote sensing satellites have star trackers on board that help determine their orientation and position. 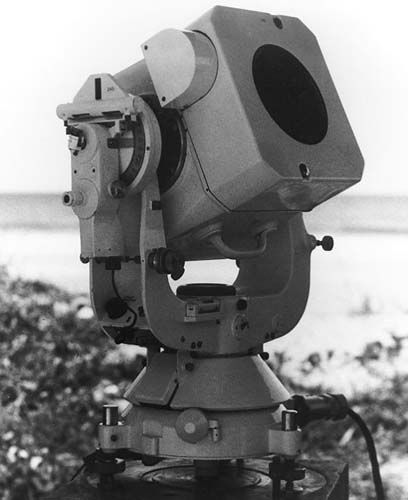 Photographic images that combine reflective satellites and fixed stars are taken with ballistic cameras whose chopping shutters open and close very fast. The technique causes both the satellites, illuminated by sunlight or earth-based beacons, and the fixed stars to appear on the plate as a series of dots. Comparative analysis of photographs provides data to calculate the orbit of the satellite. Photographs of the same satellite made by cameras thousands of kilometers apart can thus be used to determine the camera’s positions by triangulation. The accuracy of such networks has been estimated as high as ±5 meters. 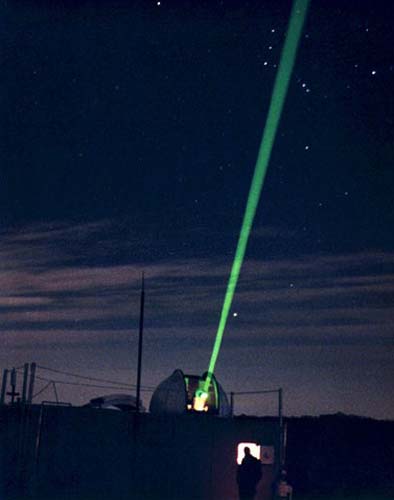 Other optical systems are much more accurate. One called SLR (Satellite Laser Ranging) is similar to measuring the distance to a satellite using a sophisticated EDM. A laser aimed from the earth to satellites equipped with retro reflectors yields the range. It is instructive that all new GNSS satellites, except GPS, are equipped with lasers onboard corner cube reflectors (aka Laser Retroreflector Arrays, LRAs) for exactly this purpose. The GPS space vehicles numbered SVN 35 (PRN 05) and SVN 36 (PRN 06) were equipped with LRAs, thereby allowing ground stations to separate the effect of errors attributable to satellite clocks from errors in the satellite’s ephemerides. Neither of them is still in service, but the plan is to have LRAs on all upcoming GPS III satellites.

The same technique, called LLR (Lunar Laser Ranging), is used to measure distances to the moon using corner cube reflector arrays left there during manned missions. There are four available arrays -  three of them set during Apollo missions and one during the Soviet Lunokhod 2 mission. These techniques can achieve positions of centimeter precision when information is gathered from several stations. However, one drawback is that the observations must be spread over long periods, up to a month, and they, of course, depend on two-way measurement.

We discussed EDMs earlier, and you know that it is possible to use EDMs as an optical system to determine distances. Satellite Laser Ranging, SLR, can measure distances using an electronic distance measuring device, an EDM, and a laser that points from the Earth to the satellite. The reflectors on the satellite can return that signal to the terrestrial sensor. This a method of measurement by phase comparison with a reference wave at the EDM. It works well for satellites orbiting. This system is also used for Lunar Laser Ranging (LLR). There are banks of reflecting retro prisms on the lunar surface that were left by the manned missions, both Russian and American. We can now determine the position of the moon relative to the Earth using electronic distance measuring to centimeter precision. This is useful for many positioning needs. 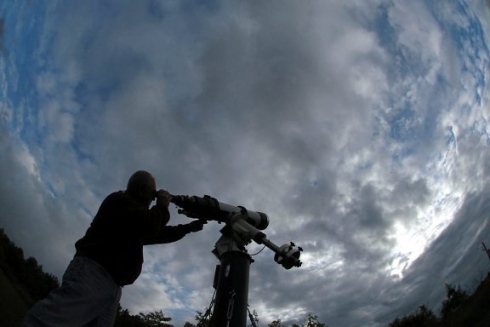 While some optical methods, like SLR, can achieve extraordinary accuracies, they can at the same time be subject to chronic difficulties. Some methods require skies to be clear at widely spaced sites simultaneously. Even then the troposphere and the ionosphere can be very uncooperative. and local atmospheric turbulence can cause the images of the satellites to scintillate. The necessity of broadcasting a signal revealing your position, the need to have expensive—and sometimes bulky—equipment and the difficulty of modeling optical refraction are some of the drawbacks to the optical method.  Still it remains a significant part of the satellite management programs of NASA and other agencies.