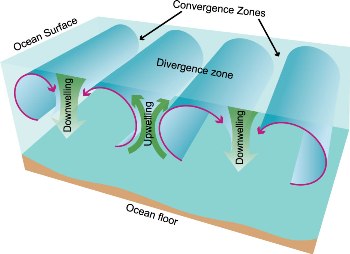 The deep ocean is generally considered to include the ocean below a transition known as the thermocline. The thermocline is the sharp temperature decrease that lies at the base of the surface mixed layer where waters are generally uniform in temperature as a result of convection. Deep-water masses are produced at the surface of the ocean and transported to depth via downwelling. Generally, downwelling occurs where the surface ocean is cool, or, rarely, unusually saline. Downwelling water travels along lines of equal density known as isopycnals and spreads out horizontally at the level where it is equal in density to the surrounding water mass.

The production of deep-water masses via downwelling occurs in high-latitude regions of the northern and southern hemispheres where the surface ocean is cooled by winds. Wind moving over the water both cools it and causes an increase in evaporation. This evaporation targets just the water molecules, resulting in an increase in the salinity of the water. Falling temperature and increasing salinity render these surface water masses denser, allowing them to downwell. In certain locations, the formation of sea ice also causes an increase in salinity as the freezing removes fresh water, leaving the salt behind in a process known as brine exclusion. Pockets of salty water around the margins of the ice sink as a result of their higher density. Moreover, brine exclusion intensifies the cooling by wind. 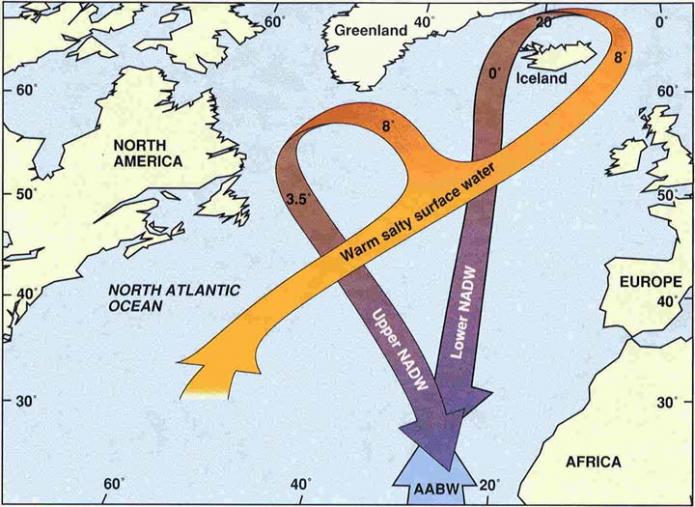 Today there are three major deep ocean masses. North Atlantic Deep Water or NADW is mainly produced where the surface ocean is cooled in the Norwegian Sea in the northern part of the North Atlantic on the north side of a ridge that runs between Greenland, Iceland, and Scotland. This cooled water seeps through the ridge and downwells. Portions of NADW are also produced in the Labrador Sea and in the Mediterranean. This water mass is 1-2.5oC and 35 ppt. NADW travels down the west side of the North Atlantic Ocean at a depth of 2000-4000m and through the west side of the South Atlantic. Much of NADW upwells in the Southern Ocean, but portions join the Antarctic Circumpolar Current and travel at depth into the Indian and Pacific Oceans. 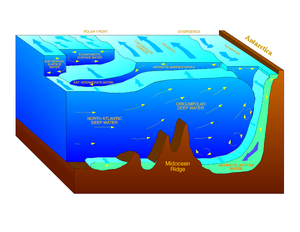 Antarctic Bottom Water or AABW is produced by evaporative cooling off the coast of Antarctica and under the Ross ice shelf. With this source, AABW is amongst the coldest water in the ocean with a temperature of -0.4oC. This water is relatively fresh (average 34.6 ppt). AABW travels northward along the western side of the South Atlantic underneath NADW. Some of the water mass spills over into the eastern part of the South Atlantic, while the remainder travels into the equatorial channel between South America and Africa.

The third major source of deep water is called Antarctic Intermediate Water or AIW. AIW is produced near the Antarctic Convergence or Polar Front where downwelling occurs as a result of the convergence of surface currents. AIW has a temperature of 3-7oC and a salinity of 34.3 ppt. It travels a considerable distance northward into the Atlantic, Indian and Pacific Ocean basins. 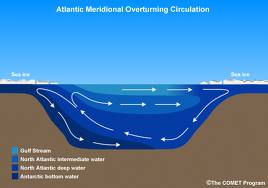 Cross-section of the Atlantic Ocean from north (right) to south (left) showing the major deep water masses.
Credit: The source of this material is the COMET® website of the University Corporation for Atmospheric Research (UCAR), sponsored in part through a cooperative agreement(s) with the National Oceanic and Atmospheric Administration (NOAA), U.S. Department of Commerce (DOC). ©1997-2011 University Corporation for Atmospheric Research. All Rights Reserved
‹ Gyres up Other Deep Water Masses ›