We begin this module with an overview of the properties of seawater and follow with a thorough discussion of the circulation of different water masses.

Most of you have spent time at the beach or taken a boat trip from the coast. The realm that you have seen is the surface layer of the ocean. This is the warm, generally illuminated layer that is exchanging heat and gases with the atmosphere. The surface layer extends down usually a few hundred meters and accounts for only a small fraction of the total ocean volume. As such it is very much like the skin of a piece of fruit. Yet this layer is home for much of the marine food chain. At the base of the surface ocean, is a sharp temperature drop at a layer known as the thermocline. Below the thermocline, ocean deep waters, by contrast, are generally cold, dark and inhospitable. However, the deep ocean plays a vital role in heat transport and thus we will spend considerable time considering deep-water masses. 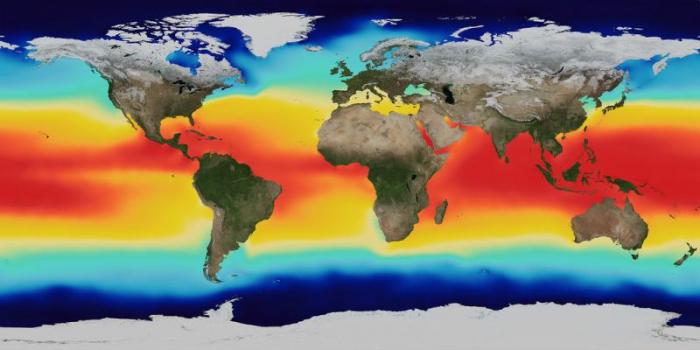 The following video shows real sea surface temperature data as well as the distribution of ice from 1985 to 1997. Note the way temperature bands and ice sheets shift from south to north with the seasons.

Video: 22 Years of Sea Surface Temperatures (1:47) This video is not narrated.

Temperature has a major influence on the density of seawater and thus plays a large role in deep ocean circulation, as we will see. Warm water expands and thus is less dense (less mass per unit area) than cold water. 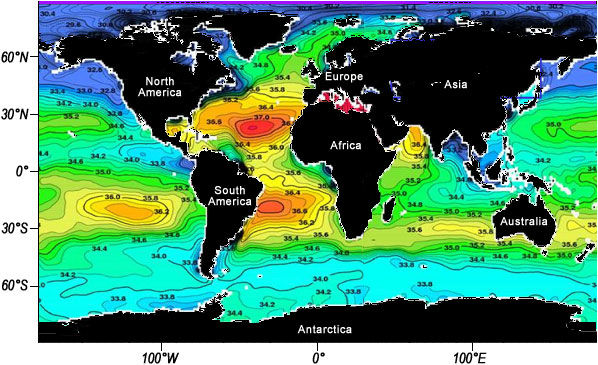 A key property of seawater that also has a significant effect on the behavior of water masses is salinity. This variable is a measure of the amount of dissolved salts such as sodium, potassium, and chlorine in the water, and, like temperature, it has a major effect on seawater density. The higher the salinity (the more salt), the denser the sea water. The major factor that controls salinity at a location is the balance of evaporation and precipitation. Where evaporation is higher than precipitation, salinity levels are higher; where precipitation exceeds evaporation, salinity levels are lower. The units of salinity are parts per thousand (ppt or o/oo), which refers to the weight of dissolved salt (in grams) in 1000 grams (or a kilogram) of water. The most saline surface waters are found in basins in highly arid regions with high rates of evaporation such as the Persian Gulf, the Red Sea, and the eastern Mediterranean. Lowest salinities are found in locations with high levels of precipitation and runoff from land, typically near where large rivers enter the ocean. Highly saline water has more salt contained between the water molecules and thus is denser than low salinity water.

‹ Study of the Oceans up Surface Ocean Circulation ›