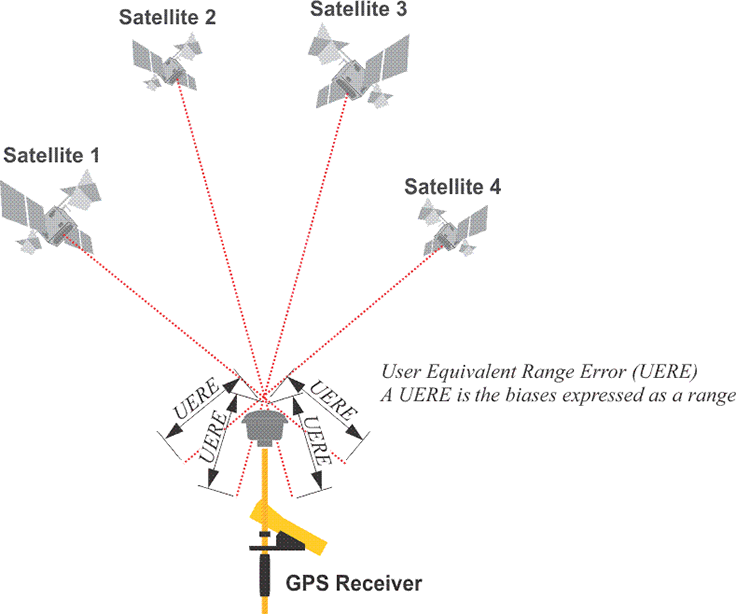 The summary of the total error budget affecting a pseudorange is called the user equivalent range error, UERE. This expression, often used in satellite surveying literature, is the square root of the sum of the squares of the individual biases. See figure above (Figure 2.1 in the textbook). Differential correction techniques limit the effect of these errors.

Some of the biases that make up the UERE such as those attributable to the atmosphere dion , dtrop and satellite orbits dρ increase and decrease with the length of the baselines between receivers. Differential correction techniques can often limit the effect of these errors.

Others included in the UERE, such as those due to receiver noise, ερ and εφ, multipath, εmρ and εmφ, do not increase and decrease with the length of the baselines between receivers.

This image indicates the fact that these errors can be described as range biases or user equivalent range errors. In other words, they can be shown as distances. And it's worthwhile to point out that these biases, attributed to the atmosphere and the orbits and etc., are increased and decreased with the length of the baselines between the GPS receivers. However, those that are due to receiver noise and in multipath are not affected by the length of the baseline. It is also important to remember that it requires a minimum of four satellites to resolve the four unknowns and have a position at a GPS receiver.

‹ The Error Budget up The Satellite Clock ›