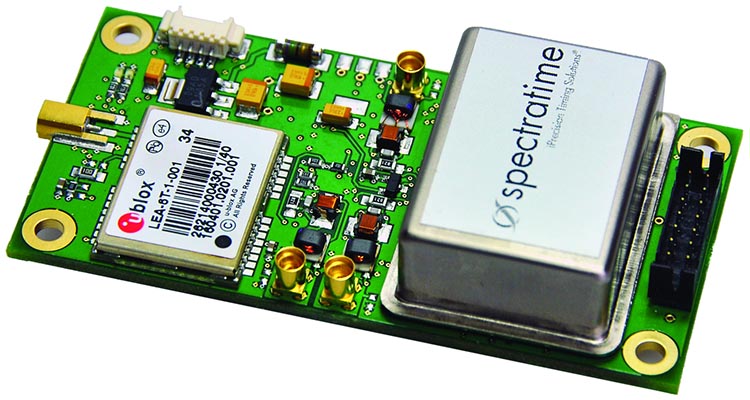 An Oven-Controlled Quartz Crystal Oscillator (OCXO) on a Board
Source: Spectratime

The third largest error which can be caused by the receiver clock, is its oscillator. Both a receiver’s measurement of phase differences and its generation of replica codes depend on the reliability of this internal frequency standard.

GPS receivers are usually equipped with quartz crystal clocks, which are relatively inexpensive and compact. They have low power requirements and long life spans. For these types of clocks, the frequency is generated by the piezoelectric effect in an oven-controlled quartz crystal disk, a device sometimes symbolized by OCXO. Their reliability ranges from a minimum of about 1 part in 108 to a maximum of about 1 part in 1010, a drift of about 0.1 nanoseconds in 1 second. Even at that, quartz clocks are not as stable as the atomic standards in the GPS satellites and are more sensitive to temperature changes, shock, and vibration. Some receiver designs augment their frequency standards by also having the capability to accept external timing from cesium or rubidium oscillators.

The third largest error that makes our observations not as good as they would be otherwise is the receiver clock bias. The oscillator in receivers tend to be oven-controlled quartz crystal oscillators.

While they're relatively stable, they certainly aren't as sophisticated as those that are found in the GPS satellite. They're not atomic standards nor need they be. Obviously, the receivers that we use would be tremendously expensive if the oscillators —if the clocks that were in them— had to be of that great stability.

It really isn't necessary for a GPS receiver clock to be wonderful, because we are solving for time. There are four unknowns (x, y, z, and time) and, therefore, four observations to make the solution.

Still we can't get along without an oscillator in the receiver. It is necessary for producing the replica code, for example. The replica code needs to match the incoming signals from the satellites. So, obviously, a receiver clock is necessary, but it doesn't need to be anything like an atomic standard.

‹ The Ionospheric Effect up The Orbital Bias ›