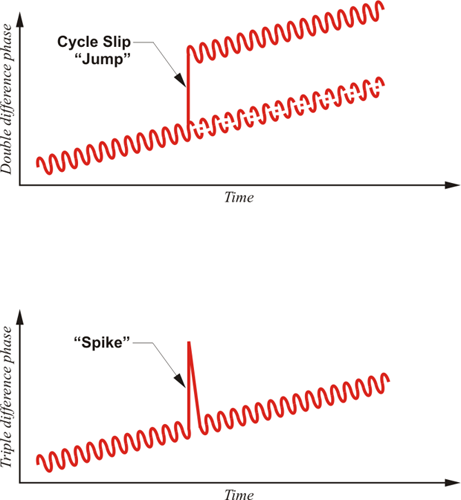 Here's a graphic to give the idea of a cycle slip. As you see here, the cycle slip is indicated in a double difference, here, as a jump from one place to another. And in a triple difference, it's a spike.

A cycle slip is a discontinuity in a receiver’s phase lock on a satellite’s signal. A power loss, a very low signal-to-noise ratio, a failure of the receiver software, a malfunctioning satellite oscillator can cause a cycle slip. It can also be caused by severe ionospheric conditions. Most common, however, are obstructions such as buildings, trees, etc., that are so solid they prevent the satellite signal from being tracked by the receiver. Under such circumstances, when the satellite reappears, the tracking resumes.

There are several methods of handling cycle slips. They are often controlled in post-processing rather than real-time.

In post-processing, the location and their size of cycle slips must be determined; then the data set can be repaired with the application of a fixed quantity to all the subsequent phase observations. One approach is to hold the initial positions of the stations occupied by the receivers as fixed, and edit the data manually. This has proven to work, but would does try patience. Another approach is to model the data on a satellite-dependent basis with continuous polynomials to find the breaks and then manually edit the data set a few cycles at a time. In fact, several methods are available to find the lost integer phase value, but they all involve testing quantities.

One of the most convenient of these methods is based on the triple difference. It can provide an automated cycle slip detection system that is not confused by clock drift and, once least-squares convergence has been achieved, it can provide initial station positions even using the unrepaired phase combinations. They may still contain cycle slips but the data can nevertheless be used to process approximate baseline vectors. Then the residuals of these solutions are tested, sometimes through several iterations. Proceeding from its own station solutions, the triple difference can predict how many cycles will occur over a particular time interval. Therefore, by evaluating triple difference residuals over that particular interval, it is not only possible to determine which satellites have integer jumps, but also the number of cycles that have actually been lost. In a sound triple difference solution without cycle slips, the residuals are usually limited to fractions of a cycle. Only those containing cycle slips have residuals close to one cycle or larger. Once cycle slips are discovered, their correction can be systematic.

‹ Differencing up Components of the Carrier Phase Observable ›