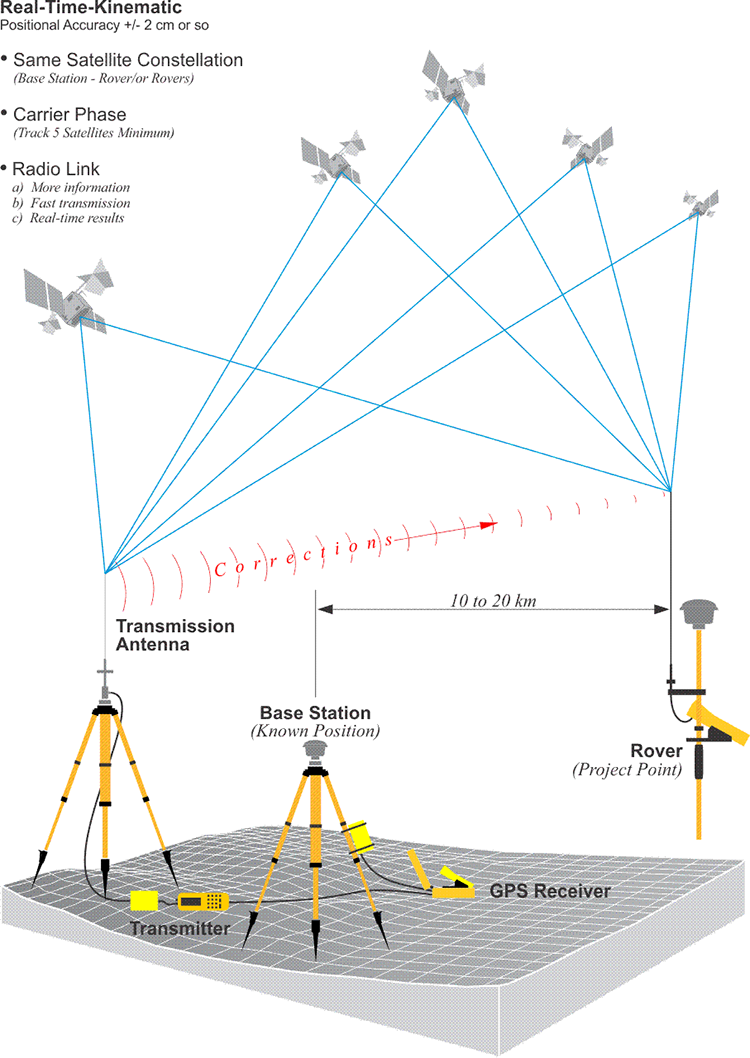 One receiver is employed in single point positioning. A minimum of two receivers are involved in relative or differential positioning. The term differential GPS, or DGPS, sometimes indicates the application of this technique with coded pseudorange measurements, whereas relative GPS usually indicates the application of this technique with carrier phase measurements. However, these definitions are by no means universal, and the use of the terms relative and differential GPS have become virtually interchangeable.

In relative positioning, one of the two receivers involved occupies a known position during the session. It is the base. The objective of the work is the determination of the position of the other, the rover, relative to the base. Both receivers observe the same constellation of satellites at the same time, and because, in typical applications, the vector between the base and the rover, known as a baseline, is so short compared with the 20,000-km altitude of the GPS satellites, there is extensive correlation between observations at the base and the rover. In other words, the two receivers record very similar errors (biases), and since the base’s position is known, corrections can be generated there that can be used to improve the solution at the rover.

If the carrier phase observable is used in relative positioning, baseline measurement accuracies of ± (1 cm + 2 ppm) are achievable. It is possible for GPS measurements of baselines to be as accurate as 1 ppm or even 0.1 ppm. If realized, that would mean that the measurement of a nine mile baseline would approach its actual length within ±0.05 ft. (1 ppm) or ±0.005 ft. (0.1 ppm). 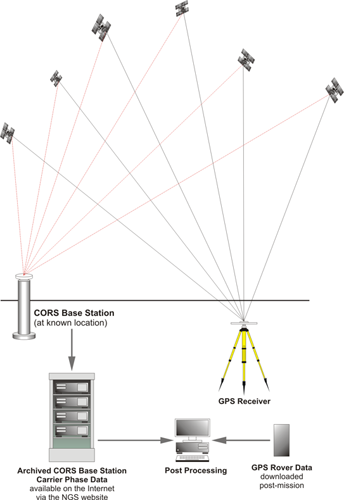 The autonomous solution can be contrasted with relative positioning or differencing. In this image, you see a GPS receiver working at the same time as a continuously operating reference station that is on a known point. Both are collecting the same constellation of six satellites. And the CORS station (Continuously Operating Reference Station), downloads its observations to an archive. This is a base station archive that, in fact, can be made available on the Internet, as the National Geodetic Survey does. The GPS receiver can download its data at an unknown point to its memory. Post-mission, the two data sets can be brought together and post-processed on a computer. The corrections can be derived from the fact that the Continuously Operating Reference Station knows where it is. This allows the solution at the GPS receiver at the unknown point to be corrected to its actual position relative to the CORS. This is relative positioning. The vector between such a pair of receivers is known as a baseline. It's the simultaneity —in other words, the fact that they're observing the same constellation at the same time— that makes it possible to do accurate GPS in this way.

‹ The Navigation Solution up Networks ›