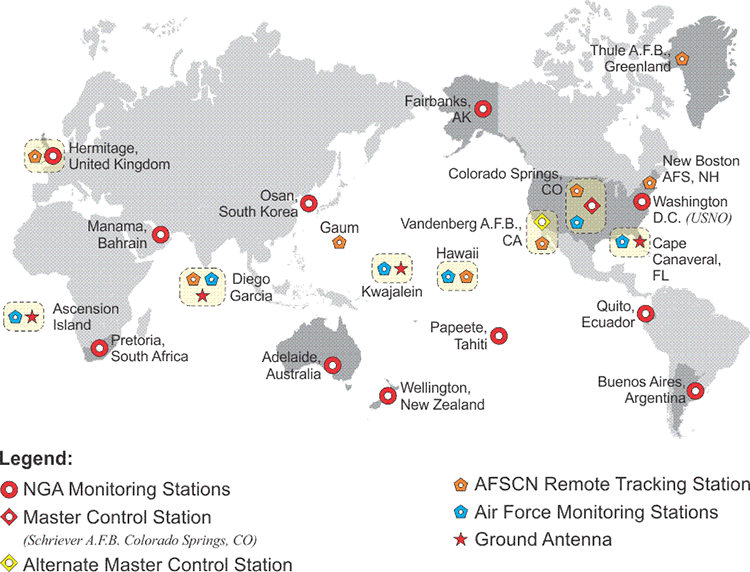 There are government tracking and uploading facilities distributed around the world. These facilities not only monitor the L-band signals from the GPS satellites and update their Navigation Messages, but also track the satellite’s health, their maneuvers, and many other things, even battery recharging. Taken together, these facilities are known as the Control Segment.

The Master Control Station (MCS), once located at Vandenberg Air Force Base in California, now resides at the Consolidated Space Operations Center (CSOC) at Schriever (formerly Falcon) Air Force Base near Colorado Springs, Colorado, and has been manned by the 2nd Space Operations Squadron (2SOPS), since 1992. There is an alternate MCS in at Vandenberg Tracking Station in California.

The 2SOPS squadron controls the satellites' orbits. For example, they maneuver the satellites from the highly eccentric orbits into which they are originally launched to the desired mission orbit and spacecraft orientation. They monitor the state of each satellite's onboard battery, solar, and propellant systems. They resolve satellite anomalies, activate spare satellites, and control Selective Availability (SA) and Anti-Spoofing (A/S). They dump the excess momentum from the wheels, the series of gyroscopic devices that stabilize each satellite. With the continuous constellation tracking data available and aided by Kalman filter estimation to manage the noise in the data, they calculate and update the parameters in the Navigation message (ephemeris, almanac, and clock corrections) to keep the information within limits, because the older it gets, the more its veracity deteriorates. This process is made possible by a persistent two-way communication with the constellation that includes both monitoring and uploading accomplished through a network of ground antennas and monitoring stations.

The data that feeds the MCS comes from monitoring stations. These stations track the entire GPS constellation. In the past, there were limitations. There were only six tracking stations. It was possible for a satellite to go unmonitored for up to two hours each day. It was clear that the calculation of the ephemerides and the precise orbits of the constellation could be improved with more monitoring stations in a wider geographical distribution. It was also clear that if one of the six stations went down, the effectiveness of the Control Segment could be considerably hampered. These ideas, and others, led to a program of improvements known as the Legacy Accuracy Improvement Initiative, L-AII. During this initiative from August 18 to September 7 of 2005, six National Geospatial Intelligence Agency, NGA, stations were added to the Control Segment. This augmented the information forwarded to the MCS with data from Washington,D.C., England, Argentina, Ecuador, Bahrain, and Australia. With this 12-station network in place, every satellite in the GPS constellation was monitored almost continuously from at least three stations when it reached at least 5º above the horizon.

Today, there are 6 Air Force and the 11 National Geospatial-Intelligence Agency (NGA) monitoring stations. The monitoring stations track all the satellites; in fact, every GPS satellite is tracked by at least 3 of these stations all the time. The monitoring stations collect range measurements, atmospheric information, satellite's orbital information, clock errors, velocity, right ascension, and declination and send them to the MCS. They also provide pseudorange and carrier phase data to the MCS. The MCS needs this constant flow of information. It provides the basis for the computation of the almanacs, clock corrections, ephemerides, and other components that make up the Navigation message. The new stations also improve the geographical diversity of the Control Segment, and that helps with the MCS isolation of errors, for example, making the distinction between the effects of the clock error from ephemeris errors. In other words, the diagnosis and solution of problems in the system are more reliable now because the MCS has redundant observations of satellite anomalies with which to work. Testing has shown that the augmented Control Segment and subsequent improved modeling has improved the accuracy of clock corrections and ephemerides in the Navigation Message substantially and may contribute to an increase in the accuracy of real-time GPS of 15% or more.

However, once the message is calculated, it needs to be sent back up to the satellites. Some of the stations have ground antennas for uploading. Four monitoring stations are collocated with such antennas. The stations at Ascension Island, Cape Canaveral, Diego Garcia, and Kwajalein upload navigation and program information to the satellites via S-band transmissions. The station at Cape Canaveral also has the capability to check satellites before launch.

The modernization of the Control Segment has been underway for some time, and it continues. In 2007, the Launch/Early Orbit, Anomaly Resolution, and Disposal Operations mission (LADO) PC-based ground system replaced the mainframe based Command-and-Control System (CCS). Since then, LADO has been upgraded several times. It uses Air Force Satellite Control Network (AFSCN) remote tracking stations only, not the dedicated GPS ground antennas to support the satellites from spacecraft separation through checkout, anomaly resolution, and all the way to end of life disposal. It also helps in the performance of satellite movements and the presentation of telemetry simulations to GPS payloads and subsystems. Air Force Space Command (AFSPC) accepted the LADO capability to handle the most modern GPS satellites at the time, the Block IIF. Another modernization program is known as the Next Generation Operational Control System or OCX. OCX will facilitate the full control of the new GPS signals like L5, as well as L2C, L1C, M code and the coming GPS III program.

‹ The Orbital Bias up The Tropospheric Effect, dtrop ›