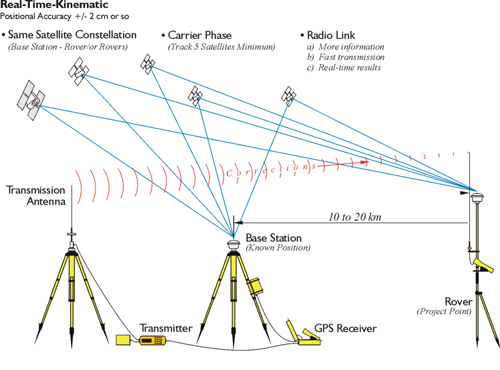 GPS work is sometimes divided into three categories; positioning, navigation, and timing (PNT). Most often, GPS surveying is concerned with the first of these, positioning. In general, there are two techniques used in surveying. They are kinematic and static. In static GPS surveying sessions, the receivers are motionless on the Earth during the observation. Because static work most often provides higher accuracy and more redundancy than kinematic work, it is usually done to establish control. The results of static GPS surveying are processed after the session is completed. In other words, the data is typically post-processed. The majority of GPS surveying control and geodetic work still relies on static applications.

In kinematic GPS surveying, the receivers are either in periodic or continuous motion. Kinematic GPS is done when real-time, or near real-time, results are needed. When the singular objective of kinematic work is positioning, the receivers move periodically using the start and stop methodology originated by Dr. Benjamin Remondi in the 1980s. When the receivers are in continuous motion, the objective may be acquisition of the location, attitude, and velocity of a moving platform (i.e., navigation), or positioning. The distinction between navigation and positioning is lessening.

Kinematic applications imply movement, one or more GPS receivers actually in motion during their observations. A moving GPS receiver on land, sea, or air is characteristic of kinematic GPS. Other characteristics of the application include results in real time and little redundancy. Hydrography, aerial mapping, gravimetric, and more and more land surveying projects are done using kinematic GPS.

Relative positioning is different than autonomous positioning. An independent receiver, an autonomous receiver, must rely on the information in the Navigation Message. In that sort of configuration, it has no way to improve on the corrections. In relative (aka differential) positioning, there are two receivers; one on a known point whose coordinates are well-established, and a second receiver on an unknown point. With this arrangement, the new unknown position can be established relative to the known point. Relative (differential) positioning creates solutions that are positionally superior to autonomous positioning, in large part because it is possible to improve on the corrections available in the Navigation Message 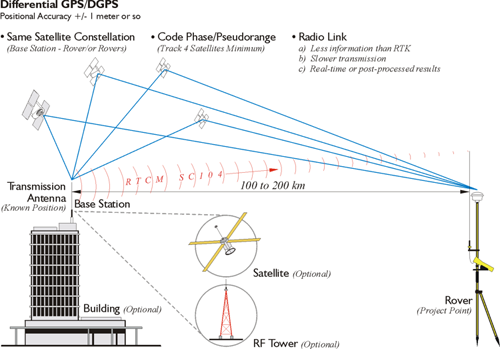 The term differential GPS, or DGPS, has come into common usage as well. Use of this acronym usually indicates a method of relative positioning where usually coded pseudorange measurements are used rather than carrier phase, though it is sometimes used in context of carrier phase solutions.

‹ Receiver Noise up The Navigation Solution ›