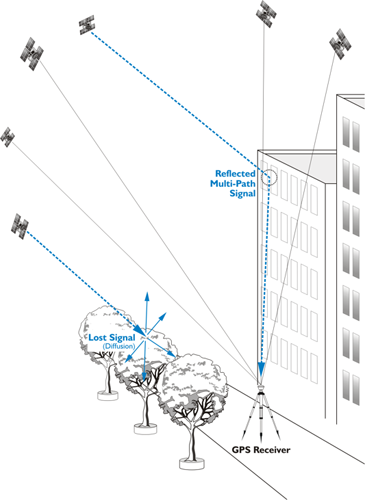 Multipath is an uncorrelated error. It is a range delay that has a different symbol in the two equations we talked about at the top. It is symbolized by εmρ in the pseudorange equation and εmφ in the carrier phase equation. As the name implies, it is the reception of the GPS signal via multiple paths rather than from a direct line of sight. It occurs when part of the signal from the satellite reaches the receiver after one or more reflections or scattering from the ground, a building, or another object. These reflected signals can interfere with the signal that reaches the receiver directly from the satellite and cause the correlation peak to become skewed. It is simple in principle. Since we are measuring distances to the satellites, and that is the foundation of the positions in GPS, a signal that bounces from an obstruction before it reaches the antenna of the GPS receiver causes a problem. If there's a bend in the signal, that upsets the distance, the range, that the receiver measures to the satellite. As illustrated here, the obstruction can be buildings, or really any reflective surface. The signal can reflect more than once. It can reflect from the ground. Multipath is one of the main reasons ground planes are used in geodetic work.

The high frequency of the GPS codes tends to limit the field over which multipath can contaminate pseudorange observations. Once a receiver has achieved lock, that is, its replica code is correlated with the incoming signal from the satellite, signals outside the expected chip length can be rejected. Generally speaking, multipath delays of less than one chip, those that are the result of a single reflection, are the most troublesome.

Fortunately, there are factors that distinguish reflected multipath signals from direct, line-of-sight, signals. For example, reflected signals at the frequencies used for L1, L2, and L5 tend to be weaker and more diffuse than the directly received signals. Another difference involves the circular polarization of the GPS signal. The polarization is actually reversed when the signal is reflected. Reflected, multipath signals become Left Hand Circular Polarized, LHCP, whereas the signals received directly from the GPS satellites are Right Hand Circular Polarized, RHCP. RHCP means that it rotates clockwise when observed in the direction of propagation. However, in the face of multiple reflections the attribute is not determinative.  In any case, these characteristics allow some multipath signals to be identified and rejected at the receiver’s antenna.

GPS antenna design can play a role in minimizing the effect of multipath. Ground planes, usually a metal sheet, are used with many antennas to reduce multipath interference by eliminating signals from low elevation angles. Generally, larger ground planes, multiple wavelengths in size, have a more stabilizing influence than smaller ground planes. However, such ground planes do not provide much protection from the propagation of waves along the ground plane itself. When a GPS signal’s wave front arrives at the edge of an antenna’s ground plane from below, it can induce a surface wave on the top of the plane that travels horizontally. Another way to mitigate this problem is the use of a choke ring antenna. Choke ring antennas, based on a design first introduced by the Jet Propulsion Laboratory (JPL), can reduce antenna gain at low elevations. This design contains a series of concentric circular troughs that are a bit more than a quarter of a wavelength deep. A choke ring antenna can prevent the formation of these surface waves. But neither ground planes nor choke rings remove the effect of reflected signals from above the antenna very effectively. There are signal processing techniques that can reduce multipath. A widely used strategy is the 15° cutoff or mask angle. This technique calls for tracking satellites only after they are more than 15° above the receiver’s horizon. Careful attention in placing the antenna away from reflective surfaces, such as nearby buildings, water, or vehicles, is another way to minimize the occurrence of multipath. The ground plane, seen on the right in the illustration, helps eliminate the bounce from the ground underneath the antenna. However, waves can almost crawl across the top of that ground plane and so there is the choke ring antenna, shown on the left in the illustration, can prevent these surface waves from propagating across the ground plane. I've mentioned the mask angle more than once. It is effective in ameliorating multipath. However, there really is no way to eliminate multipath entirely. It can be minimized by good location, away from reflective surfaces, and by uses of these sorts of antennas and also from software and the receiver itself. But, as far as I know, there is no way to absolutely eliminate the effect of multipath in all cases.