Components of the Carrier Phase Observable 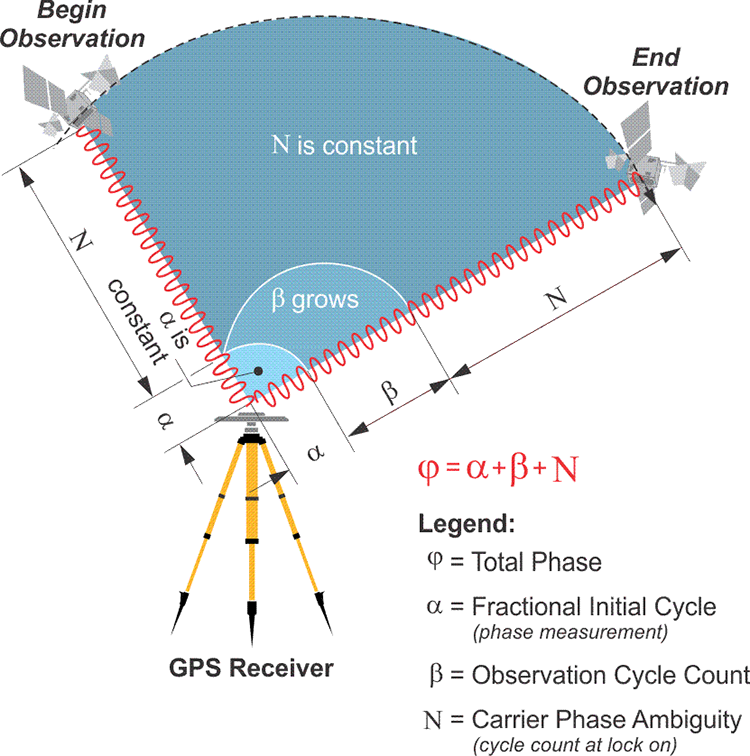 Components of the carrier phase observable

You may remember from the first lesson that when a GPS receiver locks onto a signal from a satellite, it can acquire the fractional initial phase, α. It can interpret that fractional initial phase by comparing what's coming in from the satellite with the replica frequency that it has on-board in its circuits. That comparison can take place pretty quickly and it doesn't need to change through the observation of that satellite by that receiver. You may also remember that in an EDM measurement, since it is two-way, the EDM can send out frequencies of different lengths to resolve the cycle ambiguity. GPS doesn't have that advantage. It's a one-way system with set carrier wavelengths, so N is somewhat elusive. As the satellite moves along its orbit, the GPS receiver does observed cycle count. In other words, it can count the number of full wavelengths, ß, since its lock-on, and how much they have changed as the satellite moves from one place to another in its orbit. Armed with an initial pseudorange solution, the receiver can estimate the integer ambiguity (carrier phase ambiguity), N. The initial pseudorange observation gives the receiver an idea how many full cycles there are in that N value. From that starting place, it can use a double difference to nail down that carrier phased ambiguity. Perhaps you have heard the fixed solution terminology in post-processing software in GPS. It is often mentioned as opposed to a float solution. A fixed solution means that the integers are fixed. The N has been solved. A fixed solution is superior to a float solution.

Just to reiterate this— the first fractional initial phase occurs at the first instant of lock-on. The receiver starts tracking the incoming phase from the satellite. It can't yet know how to achieve the perfect synchronization. Lacking this knowledge, the receiver grabs on to the satellite's incoming signal at some fractional part. This fractional part does not change for the duration of the observation. The integer number of cycles (the carrier phase ambiguity) is the integer number of cycles of phase that are present at the moment of lock-on. The observed cycle count is the receiver's consecutive counting of the change in full phase cycles between the receiver and the satellite as the satellite flies over. Of these three terms, ß is the only number that changes. That is, if the observation proceeds correctly. In other words, without any cycle slips. In the carrier phase observation, there are two values that do not change: the fractional initial phase and the integer cycle ambiguity, N. Only the cycle count changes, unless of course, there's a cycle slip. When lock is lost, a cycle slip occurs. It can be a power loss, an obstruction, low signal to noise ratio (SNR), anything that breaks the signal from the satellite to the receiver. When there is a cycle slip, the receiver loses its place and its count of the number of cycles, the integer lock is also lost, and re-initialization is necessary.